Away from idol worship to Christian Science

One summer day during my childhood on our family farm in southern Italy, I came down with an eye infection. Because our town doctor was away on vacation for several days, my parents begged the doctor from a nearby town to examine me. When he arrived late that evening, he gave me a few injections and told my parents, “There is nothing more I can do for him. The rest is up to God.” I eventually survived the incident, though with some loss of sight in my eye. But I found it interesting that the doctor thought God had anything to do with my health.

A few years later, my dad made arrangements for the rest of the family to reunite with him and my two older brothers in New York City. We were all excited about this. So on a beautiful day in the spring of 1961, we boarded a large passenger ship in Naples and headed for America. Upon arrival, we went on the top deck to catch a glimpse of the Statue of Liberty. I was overwhelmed with joy. I had kept a picture of her for a few years, waiting for this moment.

Relocating from a small farm town to a city of over seven million people took some adjusting. But as my language skills improved, so did my grades in school, and during my senior year in high school, I qualified for a four-year college scholarship. After the first semester of my freshman year, I thought I would do something important—read the Holy Bible. I’d heard so much about this great and popular book and thought my education would not be complete without it.

I was not disappointed. Many of the stories and inspiring statements were not taught during my religious upbringing. I decided not to go back to my religious roots but wait until I found something better than the rituals I had inherited, which included worshiping idols of clay and wood.

My prayer was answered about a year later when I encountered Christian Science while visiting my sister in Kingston, New York. One day, while walking her puppy, I passed a Christian Science Reading Room. On display in its window was a book entitled A Century of Christian Science Healing. Given my interest in biblical healings, I went in and bought a copy. I was amazed to learn that people were being healed through prayer just as they were in Jesus’ day—some of them just by reading a book titled Science and Health with Key to the Scriptures by Mary Baker Eddy.

I had never heard of Christian Science or Mary Baker Eddy. But a few days later, I purchased a copy of Science and Health and began to read it.

During this time, I was faced with an academic challenge: I needed to take 19 credits in my final semester in order to graduate, including three advanced courses in my major, which was accounting. I felt this would be impossible, but after I began to pray, I decided to put my trust in God and rely on Christian Science. I also had a physical problem: I had been diagnosed with two herniated discs in my lower back.

I eventually overcame the academic challenge and graduated on time—the first of seven children in my family to graduate from college. With regard to my back problem, however, I continued to pray.

I was accepted as a member of The Mother Church (The First Church of Christ, Scientist, in Boston) and then decided to take a two-week course on Christian Science. I felt this would give me that better understanding of God I was searching for. And it did.

One of the important lessons was that God is Love; another was that man is spiritual, not material. A quotation from the Christian Science textbook gave me hope that my back could be healed: “Divine Love always has met and always will meet every human need” (Science and Health, p. 494).

To better understand this healing power of Love, I felt I needed to make changes in my life and my thinking. I stopped praying to a statue, something I had learned to do in my youth. I also decided to give up the glass of homemade wine at our family dinner table. These changes were easy for me to make. To think of myself and others as spiritual and not material, however, required more time and effort. Continuing to put these new ideas into practice, I began to have more confidence that God would answer my prayer and meet my needs.

Then, I was awakened in the middle of the night by some movement in my lower back. When it stopped, I fell asleep again. I went to work the next morning, saying nothing about it.

A few days later, as I was getting dressed to go to work, I looked in the mirror and noticed that the two herniated discs were not there anymore. The healing was complete, and I rejoiced!

As an expression of gratitude, I became an active member of the branch Church of Christ, Scientist, I had been attending in New York and later wrote up my healing experience (see “Christian Science as a ‘skilful surgeon,’ ” Sentinel, July 20, 2015).

Today, when I look back at these experiences, I am very grateful to God for this tender loving care and for sending His Son, Christ Jesus, who sacrificed his life and then rose from death in order to show us the way back to God. I am also grateful to Mary Baker Eddy, whose loyalty to God and His Son enabled her to give us divine Science, the Comforter promised by Christ Jesus.

Send a comment to the editors
NEXT IN THIS ISSUE
TeenConnect: Turning Point
‘I stopped smoking pot’ 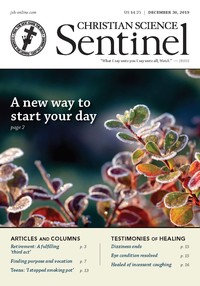