BACK IN THE SUNSHINE

I squeezed out of the tiny elevator, onto the fifth floor, as my Spanish home-stay hostess gave me the tour of her colonial-style apartment. I spied my room. With one window to the cold winter world outside and a bed, I could tell it would be my sanctuary for the next three months away from home. She left me to unpack. I heaved my suitcase onto the bed and unzipped it to find, on top of all the clothes, the pink journal my mom had made for me the summer before. Clippings of quotes from the Bible and Science and Health filled the pages and were generously balanced by many stickers of flowers and cheerful-looking shapes.

Even though I'd traveled across the world to study in Spain for the winter of my junior year of college, and finally had the independence I'd wanted for so long, my lack of excitement seemed to mirror the low gray sky outside. Ever since my mom had passed on the previous fall, things hadn't felt the same. It seemed as though I was glazed over, just watching life pass me by. I went from someone who was thriving at school, sports, and full of a sense of belonging, to feeling like all the sunshine had been squeezed out of me.

And I really wasn't letting God come in and help reconcile my doubts and fears. I often wondered if God had somehow failed to care for my family and me. It was as if my whole world, which used to line up perfectly, had dislodged just enough so that there was now one vital piece missing.

As I began to unpack in my new room, I realized I had unknowingly brought an entire pile of sorrows, selfpity, doubt, and cynicism along with me. I knew I needed to figure out if there was some way I could lighten the load. I was definitely searching for more fuel for my "faith-tank," and I longed to see the vibrancy of God's qualities and the boldness of His expression around me.

I was searching for more fuel for my "faith-tank," and I longed to see the boldness of God's expression around me.

My time in Spain had its ups and downs. There were some days when I was regaining my conviction about God and Christian Science, and others that made me want to throw my arms up in the air and give up my faith and the whole prayer thing. As time wore on, any conviction I had left waned, and I hardly ever looked at those inspirational clippings from my pink journal or my Bible and Science and Health until, eventually, I wanted nothing to do with them.

After returning to the US, and over the next year or more, when conversations referred to God, I proudly pointed to my bag of sorrows and showed everyone what a heavy load I carried around with me. The familiar metaphysical ideas and quotes I used to love seemed cliched, and I used every opportunity to push God's help out and hold on even tighter to my bag.

I've heard the expression, "It's hard to steer a parked car." It reminded me that, mentally, I was going nowhere fast. After a good year or so of feeling lost, I realized in order to see any good in our lives, we have to let God in. We can't push Him out and expect Him to be able to reveal to us everything in one dazzling and shining moment. Maybe that does happen for some people. But I think for me, I had to realize that my friendship, my relationship, and my partnership with God started with an agreement to open up to Him and work together.

And so, after going through so many months without direction, I finally felt an overwhelming spiritual hunger. At that point, I was so hungry for a sense of fulfillment. And I was hungry for the spiritual conviction that there wasn't an end to good things. I looked around and realized that everyone else but me, it seemed, was enjoying life. That's when it dawned on me: My partnership with God isn't like a sit-down restaurant, where I have to wait to be served my own portion of inspiration in a daily dish. Instead, it's the biggest, most delicious buffet you could ever imagine! But, the thing is, even though it's all there in front of you, you have to get up, and go grab whatever it is that you're hungry for. And sometimes this starts with just acknowledging God is here.

Well, this realization didn't hit until last spring, but it continued into this past fall, when I finally helped myself to a full serving of God's goodness. I did this by recognizing how rich life was when I saw that God was in the whole equation.

For instance, during my volleyball season this past fall, I strove each day to bring brightness to any situation. When things weren't going well and it seemed as though frustration was taking hold, I turned to my coach (also a Christian Scientist) for a fresh approach. She mentioned to me that I needed to stop "trying so hard," but rather to "let the rhythm of Soul" flow through me. She also reiterated the importance of turning to God, if not for myself, then for my teammates. From then on, the more selfless my prayers became, the more I felt God's goodness, and the more alive I felt.

My life at school turned into a feast of rejoicing, searching in prayer, and learning about my relationship with God all over again. Soon, it also dawned on me that I hadn't "paid the bill" for my feast. It wasn't as if I owed God something in exchange for His love, though. In order to acknowledge how God gives daily supplies, we express our gratitude and give of our devotion, thoughts and energy (see Miscellaneous Writings 1883-1896 p. 307). Now I wanted to give more of myself, and release any sense of how I thought things should happen.

After so long a time of refusing God's help, I completely turned around and handed my "bag of sorrows" over to God. Letting go, coupled with recognizing God's ability to bear any burden, was vital to the process. This enabled me to move forward—beyond the sadness I felt after my mom's passing and some of the tough times that followed. Only then was I able to find freedom and take advantage of the goodness that guides. Although it had seemed like an awful chapter in my life, I realized later that it set the stage for an incredible amount of growth and renewed perspective on Christian Science and God as Life itself. In a way, I learned more about where life really is—in God.

I'm happy to say that the overwhelming sadness and confusion of that time haven't returned. It's not that I don't ever feel at a loss for what to do, amidst my many adventures through life and at school. But I've realized that there's help if I'm willing to work with God as my partner and not just see Him as an accessory. Looking back, I'm reminded of the saying: "You know, the map isn't any good if you don't look at it."

The Sentinel's Teen Editor, Jenny Roemer, wants to read about your ideas and experiences. Send her an e-mail! roemerj@csps.com Subject: Sentinel teens

Molly King on the verge of graduation from Principle College, where she studies design and Spanish. Always on the hunt for an adventure, she plans to travel and find out where she can put her education to use.

Send a comment to the editors
NEXT IN THIS ISSUE
Article
LOOKING FOR WORK? POLISH YOUR SPIRITUAL RÉSUMÉ 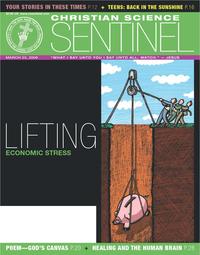