The incident of the healing of Peter's wife's mother is given in three of the Gospels, each account differing slightly from the others. In all three accounts, however, there are two points which stand out clearly: one, that the fever left her; the other, that she "ministered unto them." A consideration of these two points may be helpful. The fact that she was ready at once to minister, ready to express to others the good obtained for herself, proves unmistakably that she had received not only physical healing, but also that which was of far greater importance, the touch of the Christ.

In Christian Science we learn that God impartially blesses all. Therefore any unwillingness to share with others the good one receives must of necessity result in seeming temporarily to lessen one's capacity to receive. As all Christian Scientists learn, a knowledge of this Science confers innumerable blessings. A corresponding fact, although perhaps one not quite so readily admitted, is that the demands of this Science are proportionate to the blessings it bestows.

One definition of "to minister" is "to perform the needful thing." It frequently happens, however, that this needful or helpful thing is the one we would rather not do. We may be perfectly willing, even eager, to serve in a way of our own choosing, but the doing of the needful thing often appears to us unattractive. Yet may not a recurrence of various inharmonious conditions, physical or otherwise, sometimes be traceable to this unwillingness to serve in the necessary way?

One advantage of performing the needful thing is that we do not have to waste time in looking for it, as it is usually obviously the one demanding our immediate attention. Also, by prompt action the worry of indecision is avoided, and thus a kind impulse frequently finds expression in a kind deed.

For true growth in Christian Science the balance between receiving and giving must be maintained. Therefore, should mortal mind present the argument that one has not enough leisure in which to study and so gain a proper understanding of this subject, this can be met with the knowledge that although sufficient study is necessary if one wishes to progress, it is the translation of such study into service that brings forth the "signs following."

We are told that our Master spoke "as one having authority;" and, what was even more convincing, he acted as possessing such authority. Never once do we read of his deliberating as to whether he should perform the needful thing. No, whatever the need, that need was met.

Moreover, to do the one obviously right thing at the moment a need appears does much to prevent one's sympathy from becoming a vague and wrong kind of sentiment toward untoward conditions, while at the same time accepting the belief that one is powerless to change them.

On page 54 of the Christian Science textbook, "Science and Health with Key to the Scriptures," Mrs. Eddy says of Jesus, "Through the magnitude of his human life, he demonstrated the divine Life." To his disciples he said, "I am among you as he that serveth;" and he washed their feet, proving for all time that not the form of service, but the spirit in which it is rendered, is the thing that really counts.

This does not mean that one should excuse carelessly done or neglected study. But should one have honestly and consistently done his best in the time at his disposal, and still feel that it is insufficient to meet the requirements which he considers necessary for his spiritual growth; should he still feel that the solution of certain problems can be found only through more study, he need not be discouraged, but can rest in the assurance that, as all true knowledge is of God, his need will be met. And the correct answer to a problem will frequently be found in the doing of the needful thing of the present moment.

Unselfed service is apt to be followed by seasons of illumination and inspiration. As our Leader says on page 1 of our textbook, "Prayer, watching, and working, combined with self-immolation, are God's gracious means for accomplishing whatever has been successfully done for the Christianization and health of mankind." 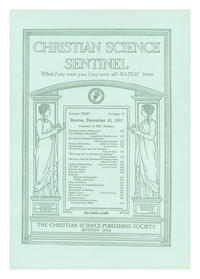