Restoring the Lost Sense of Health

The English poet Robert Bridges once wrote, "Sickening thought itself engendereth corporal pain."  The Testament of Beauty ; How futile to treat bodily pain or apply material remedies to discordant matter, when the procurator and maintainer of the malady is fearful, willful, sinful, or unenlightened thinking!

If a room becomes chilly or overwarm, one does not tamper with the thermometer to adjust the situation, for the thermometer is an indicator, not a controller, of temperature. And the same might be said of the human body. No abnormal physical condition can appear upon the body unless it has first been formed in thought, whether consciously or unconsciously. Through suggestion and acceptance physical experiences are mental experiences before they are physical. What is needed, then, is spiritually restored or reformed thought, which in turn outlines itself upon the body in the normalcy of health.

Christian Science teaches that disease is mental, not physical, that the antidote is spiritual truth, and that this divine remedy is to be applied directly to the belief, not to the apparent condition or circumstance of inharmony. This divine Science restores the spiritual consciousness of good as the only reality and of divine Mind, or God, as the only source of good. It refreshes one's concepts of life and harmony and establishes the awareness of health as divinely natural and never at the mercy of matter or material circumstances.

In Science and Health with Key to the Scriptures Mary Baker Eddy, the Discoverer and Founder of Christian Science, writes: "We should understand that the cause of disease obtains in the mortal human mind, and its cure comes from the immortal divine Mind. We should prevent the images of disease from taking form in thought, and we should efface the outlines of disease already formulated in the minds of mortals."  Science and Health, pp. 174, 175;

Christ Jesus always dealt with the formative substance of thought. He was never deceived by the presentations of sick or sinful matter. His spiritually perceptive vision immediately pierced through the cloud of materiality, or matter, to behold the perfection of man made in God's likeness, and thus he was able to "efface the outlines of disease" that had found statement and expression through fearful or sinful thinking.

The Master understood that the material so-called body is but the expression of mortal error, and he demonstrated through healing that goodness alone gives one power over its claims. He broke the allegations of sickness, death, and sin by knowing they had no identity as man, no authority over man, and no reality in man's consciousness. He never treated a sick or sinful body but restored the lost sense of health and purity through his own perfect awareness of God, good, as the source of all that is real, namely, holiness, health, strength, joy, and so on.

When a palsied man was brought to Jesus for healing, the Master made no reference to the diseased condition but lovingly assured the sufferer that his sins were forgiven. A group of scribes standing nearby mentally denounced the words as blasphemous, whereupon Jesus, at once aware of this mental attitude, asked: "Whether is easier, to say, Thy sins be forgiven thee; or to say, Arise, and walk? But that ye may know that the Son of man hath power on earth to forgive sins, (then saith he to the sick of the palsy,) Arise, take up thy bed, and go unto thine house." Matt. 9: 5, 6; And the man arose and departed healed, morally as well as physically.

The great Way-shower fully understood that "the cause of disease obtains in the mortal human mind," and therefore the forgiving of the sin and the healing of the palsy were simultaneous. The formative element of thought—in this case sin—had to be dealt with before its effect upon the body could be removed.

The false laws of sin or sickness are repealed by God's law of harmony, and one's decisions on the side of divine law will establish complete innocency of whatever charges of evil may have been made.

The Christian Science practitioner refuses to be hoodwinked by human pity or concern; he is not mesmerized into accepting error's claims. The material presentations of sin will not appall him, and the physical appearance of disease will not impress him to the point where he attempts to deal with it as a reality, as something he hopes to correct through prayerful work. Certainly he will not confuse wishful thinking about a human situation with positive, spiritual knowing. The spiritually mental work that constitutes a Christian Science treatment is serene but not apathetic, forceful but not willful, exact but not rigid. It is based upon the premise of man's perfection as God's image and likeness. Its purpose is to bless, its action is corrective, and its effect is cumulative, forever unfolding the spiritual facts of harmonious being.

Christian Science treatment restores the lost sense of health; it refreshes the patient's understanding of himself as the individualized, embodied idea of God, never lacking one element of good, such as strength, peace, or health. Such prayerful work recognizes the office of the ever-present Christ to restore the awareness of perfection as normal and natural. Truth, which is the animating afflatus of a treatment, does not reconstruct matter, but it does renew, or reestablish, the patient's consciousness of perfection; and the body embraced in such consciousness will manifest normalcy.

The following illustration exemplifies the power of Christian Science treatment to resuscitate human thought and thereby restore health. A man, whose wife is a Christian Scientist, was chatting one day with a friend who is a doctor. The friend noticed a small bump on the man's face, which had been exuding for over a year. He became quite concerned and said that he believed it was a malignancy that should have immediate attention. Because the man had some knowledge of Christian Science, he was aroused to do some prayerful work on the matter. However, a year passed, and the situation was no better.

Again he ran into his friend the doctor, who was considerably concerned about the growth and mentioned the possible complications if it were not surgically removed. This so alarmed the man that he promptly made an appointment with a Christian Science practitioner, whose explanations of growth as wholly spiritual, and of man, God's likeness, as without blemish, immediately reassured him and strengthened his confidence in the healing power of Christian Science. Within a short time his face was completely clear.

However, he harbored an unvoiced element of fear about the medical predictions, and to his dismay some months later a similar problem developed in another facial area. This time he sought the practitioner's help immediately. He was quickly assured that his immunity from medical condemnation or speculation was by virtue of his wholly spiritual condition; that no poisonous influence of fear could sway him into accepting mortality as the premise of his existence; that God is all the Life there is and that He enforces His laws of immortality, health, righteousness, and so on throughout His universe. The result was quick and complete healing. But more importantly, the man's fear was eliminated once and for all, and the intervening years have proved both healings permanent.

It requires steadfast spiritual discipline to turn from matter's presentations to the acknowledgment of the allness of Spirit and of the absolute perfection of Spirit's creation, man and the universe. The persistence of thought in presenting arguments of discouragement, fear, morbidity, and so on must be met with equal persistence in the exercise of such qualities as confidence in the power of God, gratitude for all His blessings, joy in the divine promises of the ultimate triumph of good, and patience in standing firmly for the fulfillment of those promises. No opposing force of materiality can resist the cleansing, refreshing, restorative, healing power of Truth released through a Christian Science treatment. No error of belief, known or unknown, can withstand Truth, anymore than the error of five can resist the truth of four as the answer to two and two.

There are no such things as miracles; there is only the divine naturalness of spiritually restored thought, outlining itself upon the body in holiness, loveliness, and health. Mrs. Eddy gives this reassuring counsel in speaking of Christian Science: "It changes the secretions, expels humors, dissolves tumors, relaxes rigid muscles, restores carious bones to soundness. The effect of this Science is to stir the human mind to a change of base, on which it may yield to the harmony of the divine Mind."  Science and Health, p. 162.

Matter-based thought expresses itself in abnormal material conditions, and physical symptoms are only the decoys which would, if they could, draw thinking from the corrective, restorative spiritual truths needed. Rectification, or healing, of abnormalcies follows the mental "change of base," or stirring of thought from material preoccupations to the spiritual consideration of man as coexistent with the divine Principle of all being, God. Conscious submission to the all-embracing power of divine Love restores the lost sense of health and demonstrates the naturalness of perfection in human affairs. 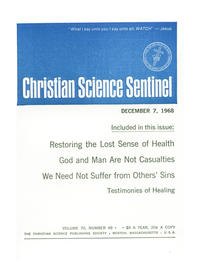