HEALED OF DIFFICULTY IN BREATHING

Two years ago, I started to develop a cough. At first it came on just a few times a day, so I took little notice. But as time went on, the coughing became more frequent—sometimes several times an hour—and I began having difficulty breathing. I still wasn't alarmed, and ignored it. Although I did my best to pray about it in the way I'd learned in Christian Science, the difficulty got steadily worse. After four or five months, sometimes I felt I was losing consciousness in the night.

To please members of my family, who are not Christian Scientists, I agreed to consult a doctor. She was a lovely, caring person, and sent me for a battery of tests and X-rays. I was told I appeared to have a lung infection or was experiencing the onset of allergic asthma. They gave me medication, which I took for a time, but to no avail. Instead, I found it increasingly difficult to breathe through my nose, which bled profusely, and my voice became a croak.

Finally, I did what I wish I'd done in the first place, I contacted a Christian Science practitioner for help through prayer. Between croaks and wheezes, I told her what was wrong. After she'd listened quietly for a while, she asked me why I was so angry. I laughed and said I wasn't angry—just a bit frightened because I always seemed to make bad decisions. Eventually I realized that she was right. I was angry. As a matter of fact, I was furious. I was angry with my family. I was angry with myself. But most of all, I was really angry with the appalling state of the world.

The practitioner readily agreed to pray with me, and over the next few days we talked several times about the images that were invading my thinking. We reasoned that they were counterfeit, because they suggested I could be manipulated by anger, which was certainly not part of my spiritual identity as God's image and likeness, as explained in the first chapter of Genesis.

We also talked about a statement from Science and Health with Key to the Scriptures, "Outside the material sense of things, all is harmony" (Mary Baker Eddy, p. 489), agreeing that this referred to God's law of harmony, which was always in operation. I was constantly under God's loving, beneficent care. In truth, nothing could possibly disturb my calmness and equilibrium. God's voice was the only voice I had to listen to. He would never tell me how sad or bad His children were, so I didn't have to react to what I was hearing on television or reading in the newspapers. I could rest peacefully in the knowledge that I was dearly loved, content, always living in my Father's approving atmosphere, like all of God's other precious children.

One night, these words from Mary Baker Eddy's hymn "Christ My Refuge" came to mind: "And o'er earth's troubled, angry sea/I see Christ walk"—just those two lines (Christian Science Hymnal, No. 253). I lingered over the comforting thought that the Christ is the message of Truth and Love to the world. Soon, I realized I could breathe through my nose again. I wasn't coughing any more.

The next morning when I told the practitioner what had happened, she said that unbeknown to me, she'd been praying with the same hymn. We rejoiced together.

Although some of the symptoms came back for a short while, I was no longer afraid. I knew that God was completely in control. And I'm grateful to report that all the discomfort ended in four days and has never returned. 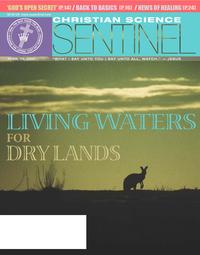