An artist faces his financial fears and gains a new view of what money really represents.

WHEN I WAS IN MY EARLY 20s, I realized that I wanted to be an artist. I was well aware of the prevalent notion that it's difficult, if not impossible, to make it financially in this profession, but that didn't bother me. I learned to live very frugally, and for a few years, that was fine. Money was spent on rent, food, essential art supplies—just the basics. I could earn enough to make ends meet, and I had all kinds of time to dedicate to my work.

As the years went by, my ideas about art and spirituality were progressing. But my income wasn't. For years I hadn't even entertained the idea of making large purchases, or of spending money in a "frivolous" way (frivolous, to me, meant things as simple as going out to dinner or a movie). Gradually, I began to see that I was really limiting myself because of this fear of spending money. As I prayed, listening for inspiration to guide me, I began to see that I needed to have a bigger and better idea about what money represents spiritually. I realized that my thrifty lifestyle had, to a certain degree, become a prison. This was something I knew needed to be addressed through prayer.

During this time, ideas for paintings came to me constantly, like water from a faucet. It was clear to me that this was a spiritual phenomenon. I wanted to see that the rest of my life, also abundantly supplied by the Almighty God, could flow and develop in the same way.

One day, the phrase, "You have to spend money to make money," popped into my head. In the traditional sense, it meant to me that in order to see a business or career progress, you have to be willing to make an investment. But in this case, it spoke to me in a very distinct way—on a spiritual level.

I'd been familiar with the idea that payment is an expression of gratitude. When I thought about this, it dawned on me that I wanted to let my rivers of gratitude, temporarily frozen by fear of lack, flow! So I made a decision to be more generous from that point forward, and to actively spend some of the money that I had on occasional gifts for friends, charitable donations, whatever seemed both reasonable and inspired. As I continued to pray, I realized this was my way of defying my fears about money. It was expressing faith in God's supply in my life.

One day, months into considering the impact of this spiritual concept, I was driving by a New England dairy farm. I noticed that they had homemade ice cream for sale. And it wasn't cheap. Like a warm light, the idea came to pick up a gallon for a friend who would appreciate it. I was so low on funds at the time that this was a really big deal. But after I made the purchase, I thought, "Wow, I get it!" And I drove home hoping that my warm glow wouldn't melt the ice cream. It was really empowering to understand that the generosity that had motivated my decision to spend this money couldn't harm me. In fact, since it was based on spiritual intuition, I felt certain it had to be supported by divine Love itself.

Like a warm light, the idea came to pick up a gallon of ice cream for a friend. I was so low on funds at the time that this was a really big deal.

Over the next months and years, I found that I had even more opportunities to be generous when making financial decisions. As I prayed about what was right to give, I felt love in return— and never suffered financially. Gradually, I found that I was participating much more generously in my life and feeling freer to spend money in a wider variety of ways. And as those rivers of gratitude began to thaw even more, I found myself looking outward to seeing how I could help the community through my art. Then I watched as my financial and artistic life changed.

During this time, it dawned on me that if I was going to make my living as an artist, I needed to find ways to be more useful to others. If I was going to be receiving money for my work (which represented an expression of gratitude), I needed to be more actively doing things that others could be grateful for. With this awareness came new ideas about how to let my art be helpful in my community, how to use it to connect people. I began to get involved in large-scale mural projects, employing local youth to help with the process, and teaching art.

I began to see that I had skills not only as an artist but as a community builder and in business relationships. My art could, I realized, be aesthetically beautiful and at the same time bring people together, provide jobs for young people, and be a public symbol of life and activity. I applied myself to this goal, honestly working to see my work bless others. As I did this, contracts and projects that I'd never dreamed of began coming my way. Unexpectedly, I began making more money than I ever had before. More than once I received calls from people I'd never met offering me jobs.

Soon, I realized that all the fear I'd felt about spending money was completely gone. It was a wonderful freedom. The spiritual balance I'd learned while praying about my relationship with money had been invaluable. I was forced to look at things in a way I hadn't done before. As I listened and prayed, I saw that money was neither a "necessary evil" nor a material crutch upon which I had to lean. Instead, it was a purposeful and natural expression of divine Principle. It wasn't in conflict with the spirituality my art was expressing. When I became less self-involved and more aware of spiritual supply, I was able to look outward. And this shift led to mutual blessings both for me and my community.

Before long, I began to see increasing value in what I had more offer, and had more confidence to ask higher prices for my work when it was appropriate. When I first began painting, I was scared to ask people to pay me. But as time went on, I realized that I needed to value my work openly and publicly as much as I did in my heart. I saw that my art would not progress if I didn't place a higher value on it. Intuitively, as I prayed, I knew what I should ask for each time in terms of payment.

These days, as I think about what it truly means to make a living, I'm focused on something Jesus said: "No man can serve two masters: for either he will hate the one, and love the other; or else he will hold to the one, and despise the other. Ye cannot serve God and mammon. Therefore I say unto you, Take no thought for your life, what ye shall eat, or what ye shall drink; nor yet for your body, what ye shall put on. Is not the life more than meat, and the body than raiment?" (Matt 6:24, 25). Jesus tells us plainly that we cannot serve God while constantly worrying about where our resources will come from, how much we will get, and what tomorrow will bring. He assures us that it is natural and normal that we have enough, because life is "more than meat."

As an artist, I've learned to live by intuition. And, in a way, this has been great "financial training" because it's natural for me to approach my monetary decisions spiritually, rather than from the perspective of fear or lack. I know it's my full-time job to listen and trust God. When I have to make purchases, I consider God's point of view and act on what feels spiritually solid— whether it's buying fresh art supplies, or taking a trip. Every step is a step of faith, prayerfully trusting that my work is holy, alive, and supported by Love, the endless fountain of supply. css

Alex Cook is an artist living in Jamaica Plain, Massachusetts. 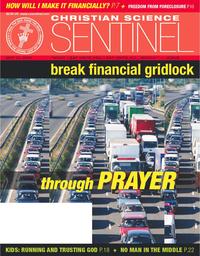