Since God’s work is already done, obstacles to its practical manifestation, such as anger or stubbornness, can melt before God’s omnipresence.

When I was selling real estate, one of my greatest satisfactions was brokering an agreement between two very different individuals. One such agreement involved a fast-talking young bond trader from Wall Street and a refined, soft-spoken older woman in no hurry at all. My fellow brokers called it reaching “a meeting of the minds.” I called it demonstrating that there is one Mind only, which is God.

The study of Christian Science has taught me to turn to God not only as our creator, our loving Father, who has made us in His image, but also as divine Mind, the source of our intelligence. Reflecting Mind’s intelligence in our daily tasks is a way of worshiping God. Listening for divine direction brings harmony and fulfillment to a project, whether building a home, writing an academic paper, or praying about a physical need. And when motivated by the desire to bless others, not just further our own success, our labor is more inspired, competent, and fruitful. In my real estate career, I found this to be true in transacting business deals.

Business agreements are as old as the Bible. When King Solomon needed lumber to build the large temple he had envisioned, he contracted with Hiram, king of Tyre, to supply timber hewn from trees in Lebanon. Solomon recompensed this merchant king annually with “twenty thousand measures of wheat for food to his household, and twenty measures of pure oil” (I Kings 5:11). This mutually beneficial exchange is an illustration of God’s law of harmony.

Contracts result from negotiations, which pass through stages that can often be uncomfortable. In the beginning, one might doubt that a deal can be accomplished. Midway through, animosity and intransigence might characterize the discussions. Close to the finish line, troubles can arise that threaten to quash the deal altogether, wasting everyone’s time and energy.

In any of these scenarios, we can derive inspiration from this assurance in Mary Baker Eddy’s book Science and Health with Key to the Scriptures: “Science reveals the possibility of achieving all good, and sets mortals at work to discover what God has already done; . . .” (p. 260).

In the universe of eternal Mind, every useful idea is already conceived and complete. We are simply witnesses to the unfoldment of that idea in all its orderly detail. And since God’s work is already done, obstacles to its practical manifestation, such as anger or stubbornness, can melt before God’s, Love’s, omnipresence. The menace of potential last-minute disaster can be countered by holding thought to the continuity of divine good and the inevitability and omniaction of God’s will. Conclusiveness belongs to every activity propelled by God’s benevolence.

If an idea is right and able to benefit all, its success will not depend on economic circumstances.

Sometimes conditions in the economy might seem unfavorable to a particular purchase or merger. But if an idea is right and able to benefit all, its success will not depend on economic circumstances. It is God’s business to impart good, and this outflow is supported by divine laws of balanced supply and demand. Eddy says, “God is not moved by the breath of praise to do more than He has already done, nor can the infinite do less than bestow all good, since He is unchanging wisdom and Love” (Science and Health, p. 2).

Several years ago my son, who was then an investment banker, called me for prayerful help on a business transaction that he was trying to close. My first thought was from Genesis: “And God saw every thing that he had made, and, behold, it was very good. . . . Thus the heavens and the earth were finished, and all the host of them” (1:31—2:1). I saw that God’s work is finished, already done. The divine fact that my son, as a son of God, had a right to fruition also came strongly to my thought. As the book of Isaiah guarantees: “They shall not build, and another inhabit; . . . They shall not labour in vain, nor bring forth for trouble; for they are the seed of the blessed of the Lord, and their offspring with them” (65:22, 23).

A few days later I looked for inspiration on how to counter delay. Referring to Jesus’ healing of a man with a withered hand, Eddy writes, “The palsied hand moved, . . . neither red tape nor indignity hindered the divine process” (Unity of Good, p. 11). So we can expect the inactive to spring into action, the delayed to leap forward, and the uncooperative to jump on board according to God’s good will for all.

Praying with these ideas brought progress for my son, but the deal did not close by the end of December as hoped. In early January, we both enjoyed an editorial titled “God’s law of completion” in an issue of this magazine. It reads in part: “This divine law of completion is God’s will for each of us. As we carry out His purpose and righteous activity, we are ensured of total, not partial, success” (Sentinel, January 14, 2013). Understanding that his most important responsibility was to reflect spiritual qualities, my son persevered in cultivating the goodwill of all parties, and I prayed, affirming the unity of all in the one infinite God, good.

Finally, the closing date was set for early February. The last 24 hours before the deadline were full of conference calls and email exchanges with the CEOs, lawyers, and investors. I knew divine Love could displace the fears and self-interest of each individual. Rather than seeing participants as difficult human personalities, I focused on God’s creation, man—meaning the true, spiritual identity of all men and women—as the image of divine Love, amenable, cooperative, and perceptive of good.

During the closing meeting, I shared with my son the following quotation about the spiritual idea leavening human thought from Eddy’s Miscellaneous Writings 1883–1896: “This action of the divine energy, even if not acknowledged, has come to be seen as diffusing richest blessings” (p. 166). That hit home for him. He emphatically affirmed that each party in the transaction could feel that each was already the recipient of “richest blessings.”

When worthy projects seem to be drawn out, we can know that the consummation is actually at hand. In God’s sight, the work is already done. We have the privilege of joyfully, tangibly witnessing that wonderful spiritual fact. 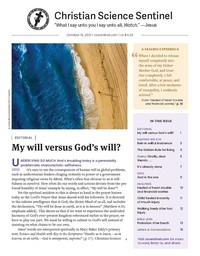