Assurances of God’s goodness and everlasting love for His creation can be read throughout the Bible. Yet it is not unusual for the average Bible reader to believe God is capable of both good and evil, a belief that not only limits God but also limits our faith in His love and ability to help us when challenges arise. The common assertion that God is capable of evil clearly contradicts the also popular assertion that God is infinite good. Ascribing to God the capacity for evil suggests a limitation to His infinite, all-good nature.

Since the Bible tells us God is Spirit, is it possible to gain a higher, more spiritual concept of God’s nature, and to rely on this understanding in difficult times?

To find within the Bible not an uninspired, material sense of God, but a reliable, spiritual understanding of an all-good God, we can start with the first chapter of the first book, Genesis. This chapter presents the first record of creation, where evil is not known by God and therefore doesn’t exist anywhere in God’s “very good” creation. According to this account, “God created man in his own image, in the image of God created he him; male and female created he them” (verse 27). This man of God’s, Spirit’s, creating is spiritual, not material.

God’s true creation, which He declared to be good, is perfect, eternally harmonious as He made it.

In Genesis 2, however, we read another account of creation, clearly a material one, the misinterpretation of which leads to mistaken, material views of God and man. As to the creation of man, this account states, “The Lord God formed man of the dust of the ground, and breathed into his nostrils the breath of life; and man became a living soul” (verse 7).

That God made man is a spiritual fact. But the belief that this God-made man is material is a misunderstanding of both God and man and originates in the misinterpretation of both creation narratives. It is commonly believed that the first and second accounts of creation in Genesis are talking about the same man, and that this man is material and mortal. Accepting a material view of God and man results in the belief that the material so-called “self” is God-created, and that this self possesses the capacity for both good and evil. Thus, mortal man believes that the attributes found in his material nature—such as hatred, anger, jealousy, and envy—originate in the Divine Being, in whose image and likeness he believes he is made.

Referring to the two different creation accounts, Mary Baker Eddy points out in Science and Health with Key to the Scriptures, “It may be worth while here to remark that, according to the best scholars, there are clear evidences of two distinct documents in the early part of the book of Genesis” (p. 523). Christian Science—the divine Science that was revealed to Mrs. Eddy by God—teaches that the two versions of creation are not talking about the same God or the same man. In the first, God is presented as having no material element, and man as having been made through the Word of God—an account that is spiritual and true. The second account is an allegory depicting God from a material point of view and man as made from dust; this misconception is error, an utter falsity.

God’s true creation, which He declared to be good, is perfect, eternally harmonious as He made it, and a present awareness of this reality is accessible to us through spiritual sense, which Mrs. Eddy explains as “a conscious, constant capacity to understand God” (Science and Health, p. 209). This spiritual capacity enables human thought to ascend beyond material contemplations and come into an understanding of the ever-present reality of Spirit, God, and His spiritual creation. In reality, God is everlasting Love, boundless good, infinite light, and “in him is no darkness at all” (I John 1:5). This elevated view of our divine Parent exposes discordant material conceptions as unreal and gives individual human consciousness access to what God is knowing and seeing, ushering in “the peace of God, which passeth all understanding” (Philippians 4:7).

This elevated view of God and man is more than theory—it’s provable. It has been of immense value to me in so many areas of my life. One particular instance comes to mind. It happened two years ago. My cousin and I decided to go see a once-popular but long-abandoned landmark in our village. It is a place where two rivers meet and join together. My cousin had been there before, so he was the guide. The entire area was heavily forested, so we brought with us two well-sharpened machetes and followed the footpath leading into the area. We got to a point where the footpath disappeared, and we were faced with a very thick jungle. We decided to create a pathway and began cutting our way into the jungle. It wasn’t an easy task, but we were committed to getting the job done. My cousin and I are outdoor people, so it was fun.

As we hacked our way into the forest, I came upon a very rough-looking and thick climbing plant right in front of me. I assumed it would be tough to cut, so I drove the machete into it with as much force as I could muster. Unfortunately, it turned out to be very soft wood, and the machete easily sliced through it and lodged in my lower leg.

At first, there was sharp pain. But almost immediately I resisted the urge to dwell on the pain and visible injury. I affirmed to myself that God fills all space, and therefore, good fills all space, including right where I was. And where this infinite good is, evil has no place. I affirmed that the all-knowing God knows only good and therefore has no knowledge of accidents. I was thoroughly convinced that my spiritual individuality was intact and totally unaffected. I followed this instruction from Science and Health: “Hold thought steadfastly to the enduring, the good, and the true, and you will bring these into your experience proportionably to their occupancy of your thoughts” (p. 261).

Initially, the bleeding was profuse, so my cousin was alarmed and was looking around for something to apply to the wound to stop the bleeding. However, the bleeding ceased very quickly on its own. Then he suggested that we go home, which we did. I kept praying the whole way back, knowing the truth about my true being, my relation to God, and my exemption from injury. Man, as God’s image, is spiritual, reflecting the nature of his Maker, and therefore is not susceptible to injury but is as perfect and harmonious as God is.

When I got home, I freshened up, which included washing the injury with soap and water. That was all the attention it got. I refused to be impressed by the physical evidence of injury, and fear was totally out of the question. My step-by-step practice of Christian Science has given me an understanding of and trust in the fact that good is the only reality. This conviction has, to a very large extent, removed fear in me. By that evening, when my cousin visited to check on me, there had been significant progress, and the pain had completely ceased. According to him, he realized I wasn’t bothered about what had happened that afternoon, so he chose not to bring it up.

The Bible states, “All things were made by him; and without him was not any thing made that was made” (John 1:3). God knows only what He created, and what He created is good. If God is good and the only creator, then His creation must be good and the only reality, and evil must therefore be unreality, an illusion. We can become conscious of this all-good reality right now and know God as He truly is—as the one perfect, holy, all-loving, and infinite Divine Being—and man as God’s reflection.

Unerring direction from God—whether or not we ask

It seems everywhere we look—from individuals needing to make decisions to governments facing quandaries—people are looking for answers as to what direction to take or hoping to find a solution that...

No one wants to lose control over themselves. But to maintain proper self-government, individuals need to be sure they don’t give in to any influence that would take away their individual integrity...

When I first learned of Christian Science, I was searching for healing, as I had been ill for 14 years with a physical condition that the doctors could not diagnose or cure. During a radio broadcas... 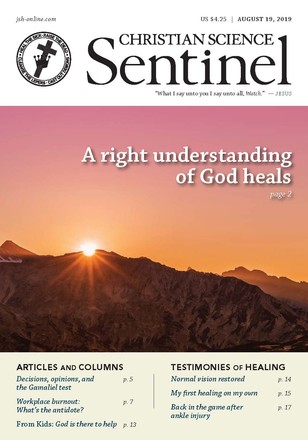 A right understanding of God heals

Decisions, opinions, and the Gamaliel test

God is there to help

My first Christian Science healing on my own

Back in the game after ankle injury