There comes a time in the life of every one when some problem seems overwhelming. It may be sickness; it may be a problem in the home or in the school; it may be a problem in business. Humanly it seems impossible to solve it. One is then forced to look away from self and beyond the human to a higher power. In this hour of humble search a seemingly intangible something comes to consciousness, which gives hope and directs one to the spiritual, the healing channel. This was my experience some fifteen years ago. I was then in wretched health, broken physically and mentally, and in great fear of becoming a rheumatic invalid. Materia medica and the religion to which I then subscribed had failed to give me either relief or hope. Then came the turning point in my life when I read in a Christian Science Sentinel that right thinking heals. I sent at once to The Christian Science Publishing Society in Boston, Massachusetts, for literature, and began the prayerful study of Christian Science. As I gained the understanding of this new-old religion, my healing came, enabling me to take my place as a useful member of society. I now know that Christian Science, the divine revelation of Mary Baker Eddy, is the Comforter promised by the Master.

Christian Science might rightly be termed "applied Christianity," for it is indeed practical and equal to the solution of the everyday problems of all mankind. Many times in my own experience has the truth of this statement been proved. Between eight and nine years ago in this room I heard for the first time a Christian Science lecture. A few weeks prior to the time I mention, I found myself looking into a future which presented nothing but an open grave by way of an insane asylum.

For many years I had suffered almost constantly from a complication of troubles which had become chronic, and which had refused to yield to medical treatment. My condition had become so serious and the hope of recovery so remote that a mental breakdown seemed imminent. At this juncture a friend urged me to seek relief through Christian Science. This I did, with the happy result that within less than a week I was completely healed, physically and mentally. From that time to the present hour I have found it neither necessary nor desirable to resort to aught else than Christian Science for the healing of every physical and mental disorder that has presented itself. In addition I have seen, both among members of my own family and among friends, hundreds of cases of physical, mental, moral, and financial inharmony quickly and permanently healed.

In the Christian Science textbook, "Science and Health with Key to the Scriptures" (p. 342), Mrs. Eddy says: "Christian Science awakens the sinner, reclaims the infidel, and raises from the couch of pain the helpless invalid. It speaks to the dumb the words of Truth, and they answer with rejoicing. It causes the deaf to hear, the lame to walk, and the blind to see. Who would be the first to disown the Christliness of good works, when our Master says, 'By their fruits ye shall know them'?" Thousands of students of Christian Science the world over have proved the truth of these statements, and are proving that Christian Science is a religion of healing. In my own experience I have proved this to be true. About twenty-five years ago I was healed of a severe form of liver trouble, for which I had used material remedies some seven or eight years, with no improvement. Christian Science was presented to me by a dear friend, who said, "God can heal you." Through the loving help I received I was instantaneously healed. Following my physical healing, the false appetite for tobacco was also destroyed. At that time I knew very little about Christian Science or the method by which I was healed. Later, as I studied the textbook, the divine Principle of healing was unfolded to me. I learned the truth about God and man's relationship to Him. What Christian Science has done for me it can do for you and for all mankind. 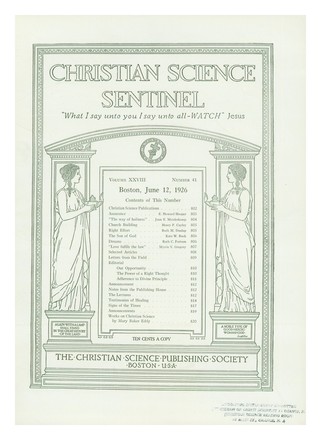 "The way of holiness"

The Son of God

A recent issue of the Citizen contains a sermon by a...

In a recent issue of the Times a report of an interview...

Ralph G. Lindstrom, Committee on Publication for the State of Colorado, | June 1926

In the report of a sermon printed in your paper having...

Frank J. Linsley, Committee on Publication for the State of Connecticut, | June 1926

In your recent issue you have again put before your...

Arthur P. De Camp, Committee on Publication for the State of Missouri, | June 1926

In a recent issue of your paper the report of a lecture on...

The Power of a Right Thought

with contributions from The Christian Science Board of Directors | June 1926