LAST YEAR, I TRIED OUT FOR OUR SCHOOL'S musical production of Bye Bye Blrdle. I've always been interested in drama and I love singing, so you can imagine now excited I got when I was cast as Rosie Alvarez, one of the leading roles.

I spent many hours memorizing lines, music, and choreography during rehearsals. The rest of the cast was great, and we all grew very close. We had many ongoing jokes, and we all loved hanging out, even offstage. The laughter calmed me during practices, and by the time production week came around, I felt really comfortable acting, singing, and even dancing on stage.

But even with this confidence, it felt like there was an urgency about rehearsing during the last few days before showtime. In addition to last-minute line fixes and dance moves, it was discovered that the version I'd been singing of my song "Spanish Rose" didn't fit the version the pit band had learned. The vocal director quickly rearranged some verses and added new words the night before our first dress rehearsal, and I started studying them. Although the dress rehearsals went smoothly, I became very nervous about singing the song in front of an audience.

I'm used to praying when I face challenges, so I decided to call a Christian Science practitioner to support me with prayer.

Thursday was the opening night, and all day in school I was thinking about something spurred by my talk with the practitioner. It was the story in the Bible about the devil tempting Jesus (see Luke 4:1-13). I thought that "the devil" (like anxiety and fear) can try to make me think I'll mess up, can tempt me to be afraid, but can't actually make me give up on something I love.

With this in mind, later that night, I headed to school to get my hair, makeup, and costume on. While waiting offstage before the first scene, I tried to keep my thoughts still as the practitioner suggested, and I was able to enter my first scene with confidence. As soon as the dialogue began, all the nervousness went away, and I had an amazing time. I felt the enthusiasm of my fellow cast members and knew that the audience also expected us to have a great show. At the end of the night, everyone was so happy. When I was talking to some friends and family afterward, they mentioned how relaxed I looked onstage, even during my "Spanish Rose" song!

The next day I woke up, pleased and excited for another performance. But my voice was rough and scratchy. After singing a few notes, I found I couldn't even reach some of the higher parts in my songs. I spoke as little as possible that day, but still it was no use.

When I got home from school, I went to the piano and took out my Christian Science Hymnal. I played a couple of songs and read the words to myself. I thought about how beautiful the night before was, and wondered how God could bless me so much one night, but then a painful throat could "curse" me the next night. Sitting on the piano bench, I flipped the Hymnal to Number 123 and began to play. After the first verse, I found myself singing:

Fear not, I am with thee, O be not dismayed,
For I am thy God, I will still give thee aid;
I'll strengthen thee, help thee, and cause thee to stand,
Upheld by My gracious, omnipotent hand.

It hit me that God hadn't left me; He was still helping me, still strengthening me! I had nothing to fear and there was no "curse" that could prevent me from performing. God's infinite support was behind me. So I started singing verse two of the hymn full out, over and over. Also, I talked to the practitioner over the phone again, and she told me about the description of oil in Science and Health with Key to the Scriptures by Mary Baker Eddy. In the Glossary, it says that oil means "consecration; charity; gentleness; prayer; heavenly inspiration" (p. 592). We talked about how these qualities are spiritual, God-given, and they couldn't run out. Because of this, my enthusiasm, skill, and inspiration could not vary from night to night.

Gradually, my voice came back clear and strong. I arrived at school excited, and again, the cast had an amazing night. As I later told my practitioner in an email: "The night was very successful. The house was packed, sold out! First time in like, ever! There was an extra energy in the chorus, and although there were some mess-ups, everything went nicely. My voice was full and strong the entire time."

Then came Saturday, closing night. I figured this night would be easy. I mean, I'd faced mental and physical obstacles. What could possibly go wrong now? Well, about three hours before I had to head to school to get ready, I started to feel really depressed and began to bawl. So I tried walking around, playing piano, singing. Nothing brightened my mood. It felt as if I was under so much pressure, like the whole world was pushing on me and I couldn't do anything.

But I began praying with the idea that my "oil," or inspiration, could never run out, and also with the idea that God was still with me. Again, I opened the Hymnal. I turned to Hymn 150. The third verse reads: My voice came back clear and strong.

Dear Father and Saviour, we thank Thee for life,
And courage that rises undaunted by strife,
For confident giving and giving's reward,
For beauty and love in the life of our Lord.

I thought about that for a minute. I realized that everything I was doing and expressing during the musical was not for me, by me, or because of me, but was only to glorify God. My talents were a result of Him at work. My performing was my way of thanking God for all He was giving to me. Plus, since I was giving to the audience, it would be natural for me to do it confidently and successfully.

I got into the car, and my mom drove me to school. Even though I was still a bit shaken by what had just happened, I walked into school, got into costume, did my hair and makeup, warmed up with the group, and took my place offstage as the show started. I thought about how many people were out there waiting for and supporting me. I knew how hard I'd worked with my fellow cast members—this would help us have a great show. And I became confident again.

During the opening announcements, the button to my bright red blazer suddenly broke. But I didn't panic. I fastwalked in my heels to the costume assistants, hooked the button with a bobby pin, and entered stage left exactly on cue. I felt full of joy again, and I think it showed on stage. Each scene went smoothly, and by the final bow, the whole cast was smiling. Success!

Robiny Jamerson is a freshman in high school. She loves photography and playing soccer. 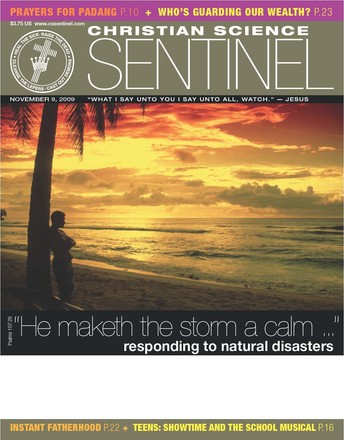 'A VERY PRESENT HELP IN TROUBLE'

Earth's extremes and the prayer that does more than comfort

an Indonesian's prayers for Padang

For physical and mental health in natural disaster zone

SHOWTIME AND THE SCHOOL MUSICAL

HURT FEELINGS DON'T HAVE TO HANG AROUND

WHO'S GUARDING OUR WEALTH?

SAFE FROM INJURY AFTER FALL FROM BIKE

HEALED OF PAIN AND INFLAMMATION

GREATNESS BEGINS AND ENDS WITH GOD