AUSTRALIA— just a prayer away

IT'S DECEMBER —summer in Australia—and the temperature keeps climbing. It's really hot. I have a lovely garden and green lawn around my home. And, of course, keeping it this way means giving it water. But there's a problem. I can't bear to turn on the tap. I feel guilty. How can I pour this precious commodity onto my patch of ground when so much of my country is suffering from a severe drought?

When I called my friends Helen and Dudley Cronin, who grow wheat, barley, and sorghum on their 1,400 acre farm 300 kilometers [186 miles] west of Brisbane in Queensland, Helen reported: "We've been suffering drought here for three years. This drought is horrific, following as it has on the one in the '90s. We're not getting consistent crops. We can't make an income. We have to borrow more and more money from the bank for planting.

"The situation is so bad that our son, Rick, had to leave the farm. He couldn't make a living working on it. It's distressing. You feel isolated, alone. There's so little money to spend on food, work clothes, fuel, and basic necessities. Our farm dam (water hole) is dry. We're carting in water from a neighbor's dam."

The Cronins' story is typical of what's happening all over Australia. Throughout the continent, large and small lakes, dams, and rivers are dry, or drying up. Some areas have not had good rain for seven years. It's hurting farmers, graziers (sheep and cattle ranchers), sugar cane and vegetable growers, and even honey producers. Australia may have to import honey for the first time in its history, because so many bees are dying, or are unable to gather pollen to make honey . . . because the plants simply are not growing.

God's goodness doesn't come to us in cycles of boom or bust, too much or too little. It's constant. Unwavering.

The "big dry," as the drought is called, is also driving native animals such as the kangaroo into farming areas where they're eating what little there is of the depleted crops.

The picture is not much better in the city. Meat and vegetables are becoming scarce, and the prices are rising. Big reservoirs that supply capital cities with water are at their lowest levels.

"It's a worry," said a national radio host. "At my local public swimming pool I had a quick shower before changing out of my swimsuit. The woman in the next shower was still running water, so I said to her, 'Look, there's a drought on you know!' She replied, 'Yes, I know, but it's only in the bush.' " This seasoned broadcaster couldn't believe what she'd heard. "How can someone not know that the drought is everywhere?!" she asked listeners. "It's right across the country—north, south, east, and west, and it's affecting all of us."

Australia is the driest continent on the planet. Newspaper reports say if the drought continues, we may not be able to produce enough food to feed our people, let alone keep up our export trade. That's why huge appeals such as one called "Farmhand" are raising money to help struggling farmers stay on the land, and some business leaders are talking about ways to "drought-proof" Australia. These are important steps, but they will take time, and help is needed now.

Is there anything we can do now?

We can pray. Prayer is an immediate help. And it isn't "doing nothing." It's a powerful resource, because prayer connects us to a higher sustaining power—a divine Helper. This Helper is divine Love itself, and it cares for us every moment. Love always has answers—solutions—for each of us. This is not theory or wishful thinking. I've seen prayer's effectiveness many times, even in desperate situations.

During the Vietnam War, I spent four months touring as a singer in a group that entertained the troops stationed there. When we weren't traveling, those of us in the show lived in the city of Da Nang. One day we simply ran out of food—and had no way of getting more.

I sat on my bunk and prayed.

My prayer went something like this: "Dear Father, I know that You are with us. We can never lack anything good while You're caring for us. You're always meeting our needs. Your goodness is sure, steady, and reliable. It's here every day, around the clock. You're constantly pouring out Your love to us. Your love is superabundant. It's not some tiny ineffectual thing. It's infinite. I don't have to beg You to help us. You are looking after us right now. There is an answer."

As I prayed, I deeply felt God's love and knew that we would have whatever we needed.

A couple of hours later, a group of Marines came to our door with frozen steaks. They left. There was a knock at the door. This time it was the Navy. They gave us a whole box of sea rations—tinned food, jam, crackers, beans, and meat. Shortly after that, the Army arrived with more food—milk and more steaks. We now had so much meat that we had to tie a rope around the door of our freezer compartment to keep it closed. I'm certain this was not coincidence or luck. When I prayed, I had expected my prayers to be effective, to make a difference.

Divine Love's care is not random or accidental. When something good happens, it's not just a "lucky break." Goodness is our heritage—what God has designed and mandated for each of us. God's goodness doesn't come to us in cycles of boom or bust, too much or too little. It's constant. Unwavering. And it's ours. Adverse weather, stock market slumps, economic recession, or terrorist attacks—none of these can take God's provision from us. The experience I had in praying for food was an example of the power of God to solve a big problem. I think it points to a reason for individual prayer about Australia's current crisis.

Absolutely nothing is out of reach of God's healing power—not even widespread drought. Prayer connects us to the divine power. It comforts, supports, and helps us through tough times. It has a transforming effect on our thoughts, and thus on our human experience. That's why no matter where in the world you live, your prayers are beneficial.

Your prayers can help end the drought in Australia.

Beverly Goldsmith is a contributing editor, who lives in Brisbane, Australia. 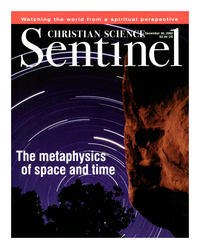