Nothing can tarnish God’s glory or hinder God from providing care for His creation—this is a comforting reality brought out by Christian Science.

This spiritual truth is needed by many in the world today, particularly those who serve in dangerous situations, such as military service members as well as police officers and other first responders. Their service can sometimes require them to make very difficult decisions while under great pressure. For some, these decisions continue to be very real and troubling even long after they were made. If a tragic mistake was made in the heat of the moment, it can be a heavy burden to carry. It may seem that there is little or no hope for healing. I’m finding, however, that prayer as taught by Christ Jesus and further illuminated in the teachings of Christian Science truly can make a difference for the better.

The lingering effects of trauma would seem to run counter to the promises of God’s deliverance and care given so clearly throughout the Bible and demonstrated especially in Christ Jesus’ healing works. Jesus taught, “Blessed are they which are persecuted for righteousness’ sake: for theirs is the kingdom of heaven” (Matthew 5:10). The Greek word translated in this passage as persecuted can also refer to being pursued. This second meaning seems to fit those individuals who are dealing with trauma and regret from having encountered tragic circumstances or from having made a mistake; they may have striven to be truly righteous in their service to others, but they are being negatively pursued by the past.

So how is theirs “the kingdom of heaven”? In divine reality, it is theirs now and can be demonstrated now because of God’s promises of deliverance. A line from the Lord’s Prayer speaks of this divine deliverance: “Deliver us from evil” (Matthew 6:13). Mary Baker Eddy’s spiritual interpretation of this prayer assures us that God “delivereth us from sin, disease, and death” (Science and Health with Key to the Scriptures, p. 17).

I have witnessed proof of this deliverance while serving as a chaplain in the United States Army Reserve. My understanding of the spiritual truth of God’s deliverance has helped me pray about difficult situations soldiers have faced and work with soldiers to help bring more love and peace to their lives. I do not always talk directly about Christian Science, since as a chaplain I try to minister to their individual religious understanding, while at the same time staying true to my own conscience and understanding of God. But we work from the common ground we share spiritually, and I have been grateful when soldiers have acknowledged how our discussions and prayers have helped them.

Although I have not served in a combat environment, I have come into contact with soldiers who have. In one case, I got a call from a soldier who had been unable to sleep and was troubled by anger and guilt over things that had happened while he was in combat. His lifelong understanding of right and wrong had been significantly challenged and upended by what he had experienced.

God will show us how to correct any past wrongdoing and free us from fear and guilt.

Whenever I meet with a soldier seeking help, I strive to let the interaction glorify God. One of the ways this has been expressed is through the inclusion of silent prayer during these meetings. Often, if the conversation gets to a point where progress isn’t being made, I ask the individual if I may pray silently, and I let that person know that he or she is welcome to join in praying as well.

In this case, the message that came through prayer was a simple statement, which I then spoke out loud to him. It cut through all of his human history, mistakes, and regrets. It was simple and addressed his anger and guilt: “These emotions don’t glorify God.” As we considered this, he could easily grasp, because of his religious upbringing, the need to express forgiveness instead of anger. But he wasn’t so immediately able to let go of guilt.

I pointed out the Bible account of how Jesus interacted with Peter after Jesus’ resurrection (see John 21:15–17). Jesus did not even mention the fact that Peter had denied knowing him in the hours leading up to the crucifixion. Instead, Jesus asked Peter three times if Peter loved him. The three times possibly related to the number of times Peter had denied knowing Jesus. This interaction gave Peter a chance to affirm his love and find freedom and redemption from his mistake. I shared what this meant to me: that instead of staying trapped in guilt, we can always ask ourselves if we are loving God and His Son, the Christ. As we grow in this love, God will show us how to correct any past wrongdoing and free us from fear and guilt.

The next day the soldier said he had slept well, and a month later he texted me, thanking me for the conversation and saying that God had taken his “stony heart and replaced it with a fresh one.” We praised God together.

I was grateful for how God had met this specific need. This also got me thinking about the deep spiritual truths that are the foundation for this kind of transformation and redemption from trauma.

For instance, I thought about how Jesus’ teachings can free us from the belief that we are inherently flawed or prone to making mistakes: His teachings show us the pure love of God that we naturally express in our true nature as God’s child. The understanding of this truth enables us to drop old ways of thinking and acting and claim and express more of what we really are as God’s offspring.

I also found it helpful to think less of remedying the past or present, and instead let God, through His impartial love, draw us closer to Him. Then we become more aware of God’s presence and goodness as we love God and what He has done for us. The glory of God, delivering us from all evil, is seen more clearly as individuals are drawn to the goodness and love of infinite good, God. This also naturally transforms individual consciousness and enables us to separate ourselves from any characteristics that lack God’s glory, and therefore don’t glorify God.

All that is created by God must glorify Him. Christ Jesus’ sacrifice through the crucifixion, and his exaltation in the resurrection and ascension, proved that no circumstance could tarnish God’s glory. Jesus proved that everyone’s true self is at one with God, our divine Principle, on whom we can rely. The man and woman of God’s creating could never express or experience anything but goodness that glorifies God. All the baggage of negative qualities and feelings can drop from consciousness when we awake to what we really are in our true light as God’s image and likeness. 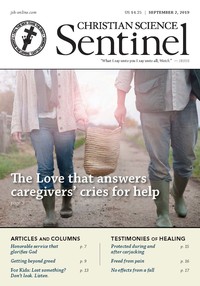