Wallace’s daughter, Peggy Wallace Kennedy, recently recalled how Chisholm’s visit to the hospital did just that. She said it “planted a seed of new beginnings in my father’s heart.” Over time, that seed bore fruit when Wallace publicly renounced racism, sought the black community’s forgiveness, and appointed a record number of African Americans to fill state positions in his final term as governor (see “How segregationist George Wallace became a model for racial reconciliation: ‘Voices of the Movement,’ Episode 6,” Cape Up with Jonathan Capehart, The Washington Post, podcast audio, May 16, 2019).

Chisholm’s example prompted me to question my own attitude toward those I feel are excusing and fostering hatred from whatever political angle, whether through a media megaphone or by targeting individuals online. In the privacy of my thoughts, I had to ask, Am I really following the example of Jesus in how I think about those who I feel put political expediency ahead of common humanity?

In healing after healing, Jesus brought to light the nature of God as divine Love, who knows only His own flawless creation. In this true, spiritual creation, each individual is Deity’s loved offspring, expressing God’s boundless goodness. Christ Jesus evidenced the reality of this relation to God, proving everyone’s true nature to be spiritual and good. But on a journey to Jerusalem, he also showed his followers that they needed to exemplify this nature by rising above emotional reactions to bigoted behavior. He had sent some followers to Samaria to arrange a place to stay, but the Samaritans—a Jewish sect at loggerheads with Jews who worshiped in Jerusalem—bluntly refused their request (see Luke 9:51–56).

A reforming, Christly love includes doing good—if the opportunity arises—to anyone we feel is an enemy.

A Bible translation called The Voice conveys, in script form, how two of Jesus’ disciples reacted and how Jesus responded. This script capitalizes pronouns referring to Jesus, while in Christian Science such usage is reserved only for divine Spirit, God:

James and John (outraged): Lord, do You want us to call down fire from heaven to destroy these people who have rejected You? [Just as Elijah did.]

Jesus (turning toward them and shaking His head): You just don’t get it. [The Son of Man didn’t come to ruin the lives of people, but He came to liberate them.]

The snub experienced by Jesus and his followers may seem to be dwarfed by issues of hatred dividing nations today. But Jesus responded this way even when facing dire threats, consistently exemplifying his own unequivocal counsel to “love your enemies, bless those who curse you, do good to those who hate you, and pray for those who spitefully use you and persecute you, that you may be sons of your Father in heaven” (Matthew 5:44, 45, New King James Version).

Mary Baker Eddy, who discovered the divine Science of Christ, didn’t see Jesus’ instruction as a demand to love wrong behavior or ignore it but as a way to help change it. Her deep understanding of Jesus’ counsel and example, and her own experience of sustaining that Christly love in the face of systematic attacks by those opposing her ideas, gave her authority to write, “Love your enemies, or you will not lose them; and if you love them, you will help to reform them” (Miscellaneous Writings 1883–1896, pp. 210–211).

A reforming, Christly love includes doing good—if the opportunity arises—to anyone we feel is an enemy, as Congresswoman Chisholm did. It also demands of us the deeper task of identifying and taking on an adversary we all struggle with to some degree. This adversary is the material worldview that misconceives everything through a limiting lens of believing that matter, rather than Spirit, God, is the definer of our lives. This false belief of a life apart from God is the source of all limiting thinking. Any propensity to feel or stir hatred is an aspect of that thinking—one that, as George Wallace found, can take time, remorse, and repentance to outgrow.

To help awaken in others a desire to turn in the direction of reform takes a turnaround of our own, from either resigning or reacting to hatred to glimpsing Love’s universal reality. Mrs. Eddy’s primary work on Christian Science, Science and Health with Key to the Scriptures, describes both the boundless scope of this Love and the significance of Love being so unbounded: “Divine Love is infinite. Therefore all that really exists is in and of God, and manifests His love” (p. 340). This means that all that’s spiritually true about whatever politicians, activists, or others we might feel deeply at odds with is that their real nature is “in and of God” and manifests God’s love.

Even glimpsing this to be true, we begin to recognize that hatred, in any form, is material mentality suggesting that an infinite Love is somehow absent. To hate, or return hatred, is to concede to this false claim. The world needs the opposite from us: a yielding to Love’s infinite presence, which reveals how it’s material mentality, or mortal mind, that is truly absent. Every spiritual glimpse of mortal mentality’s unreality chips away at the false appearance of solidity that human hatred presents.

As we more consistently, humbly, and prayerfully yield to such glimpses of what divine Love is seeing, we can increasingly say, as Mary Baker Eddy once said, “Each day I pray: ‘God bless my enemies; make them Thy friends; give them to know the joy and the peace of love’ ” (The First Church of Christ, Scientist, and Miscellany, p. 220). This will help to plant those seeds of new beginnings in their hearts. 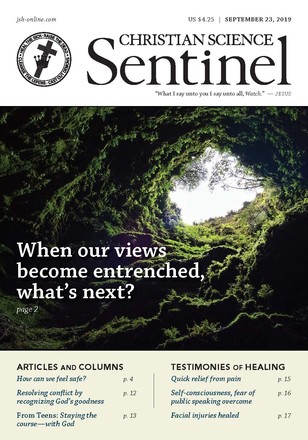 How can we feel safe?

A spiritual perspective on birth

An open door to healing

'The desert shall rejoice ...'