All I wanted for Christmas when I was seven was a pot-bellied pig. My grandma surprised me with a tiny, spotted piglet. I named him Otis. Ten and a half years later, this once-tiny pig is now an astounding one hundred and thirty pounds and resides in the barnyard.

Unlike the other farm critters, Otis prefers to live in his own yard right outside the main pasture on my family’s farm. He likes to let the other animals know how smart he is, and when he isn’t showing off, sleeping, eating, or looking for something to eat, Otis has an important job on the farm. When guests come for farm visits, he welcomes them—and even lets the kids paint his toenails. 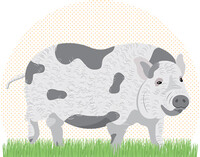 About two years ago, Otis’s health declined, his appetite decreased, and he dropped a lot of weight. We started to feed him sweeter, softer food, which encouraged him to eat and seemed to help for a while. But then, while I was out of town on a college visit, he took a turn for the worse. My concerned mom talked with our livestock veterinarian, who told her that old pigs sometimes just fade away, and that there wasn’t much he could do to help.

When I got home, I called a friend who has years of experience raising pigs, and she said one of her pigs had experienced similar symptoms, which possibly indicated cancer, and had shortly passed away. These words filled me with fear. Nevertheless, I fought the urge to give in to hopelessness and despair.

I’ve had many healings through prayer in my life, often with the help of a Christian Science practitioner. I called a practitioner to pray for me this time, too, and was immediately grateful that I had done so.

The practitioner firmly and confidently explained that all of God’s creatures are essentially spiritual ideas under God’s loving government—and she shared the idea from Science and Health with Key to the Scriptures by Mary Baker Eddy that there is “no stoppage of harmonious action” (p. 420). I understood that God is the source of all action, and that since God is supreme, there is nothing that can interfere with or stop God’s harmonious, life-giving action.

The passing of time could never deprive Otis of his God-given innocence, playfulness, and vibrancy.

My fear immediately disappeared. I saw that Otis was not governed by laws of mortality but by the harmonious, sustaining laws of God, good. And as I sat next to him, I no longer saw him as a sickly, elderly pig. I saw him as the tiny spotted piglet wearing a Santa hat underneath the Christmas tree. I saw him running away from me in the orchard with an apple in his mouth. I remembered how he patiently listened to a group of third-graders read Charlotte’s Web to him. I knew that the passing of time could never deprive him of the innocence, playfulness, patience, and vibrancy he exemplified on each of these occasions. They are qualities he embodies forever because they come from God.

When I went out to the barn a few hours later, Otis greeted me at the gate, grunting hungrily and wagging his tail. Happy to see him up and about, I ran back to the house to retrieve his next meal. He inhaled his food with gusto. He was active and hungry the next day, too. I was so grateful to have witnessed his healing.

A few days later, though, Otis was manifesting the same symptoms again, and I gave the practitioner another call. She asked me, “How can you go back to someplace you’ve never been?” It was a good point. I realized that if Otis had never been anything other than his God-given spiritual identity, which was governed by God, then he couldn’t fall back to something he had never been—sick. In my own prayers, I denounced the belief that there could be a lapse in spiritual progress, since “progress is the law of God …” (Science and Health, p. 233).

Sure enough, the next time I went to check on my pig, he was whole, perfect, and full of life. He has since regained the 25 pounds he lost and would like to be fed as often as possible.

This wonderful healing renewed my confidence in God and the efficacy of prayer. Otis continues as king of the barnyard—at least as far as he’s concerned. 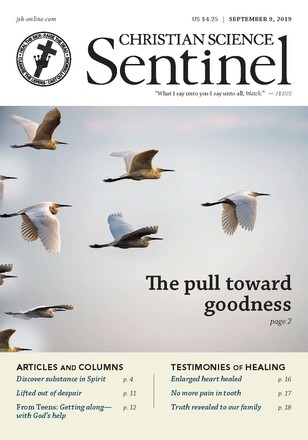 The pull toward goodness

Life is not a game of chance

Lifted out of despair

King of the barnyard

No more pain in tooth

Truth revealed to our family through prayer