How to stop a war

It was the 1960s, and the Vietnam War was raging. Like many members of my generation, I was opposed to the war and very much wanted to help bring it to an end. I felt impelled to pray about the conflict, but it was hard to believe that the prayers of one individual could have any real impact on such a formidable problem.

Then the subject came up in my Christian Science Sunday School class. The other students and I asked our teacher whether one person’s prayer could really have an effect on pressing global issues, particularly those, like war, that have plagued humanity throughout history. Our teacher assured us that it could, and she gave each of us an assignment for that week: Go and stop a war.

I was sure I had never heard anything so outrageous. How could an inconsequential person like me—a college student—stop a war? While I was by no means a radical, I had been supporting the peace movement for some time, and my association with it had left me certain of one thing: Ending a war is a long and complicated process.

But I was inspired by a statement our Sunday School teacher had shared with us from Mary Baker Eddy’s 1895 “Dedicatory Sermon” for the Original Edifice of The Mother Church: “Is not a man metaphysically and mathematically number one, a unit, and therefore whole number, governed and protected by his divine Principle, God? You have simply to preserve a scientific, positive sense of unity with your divine source, and daily demonstrate this. Then you will find that one is as important a factor as duodecillions in being and doing right, and thus demonstrating deific Principle.… Each of Christ’s little ones reflects the infinite One, and therefore is the seer’s declaration true, that ‘one on God’s side is a majority’ ” (Pulpit and Press, p. 4).

With God there are no sides, no divisions. There is only God, the infinite One.

What did it mean, I wondered, to be “on God’s side”? Mrs. Eddy said that it is to understand your unity with God. It was clear to me that since we are all created by God, I had to understand everyone else’s unity with Him as well. That meant not getting pulled into believing that there are two sides in any conflict, but insisting on acknowledging only one side—God’s side—and knowing that every individual involved is actually on that side with Him. It meant refusing to see God’s creation as fractured, split, or warring, and instead seeing each of His children, every one of us, as the individualized expression of the divine One—whole, complete, dwelling forever in unity.

With God there are no sides, no divisions. There is only God, the infinite One. So to be one with God, to see the oneness of God and bring our thoughts and lives into harmony with it, is not only a majority—it is unanimity.

It also seemed significant that Mrs. Eddy said we need to not only “preserve a scientific, positive sense of unity” with God but also “demonstrate” that unity every day. Both prayer and putting it into practice in healing are required if we want to be as important as “duodecillions in being and doing right.” If we do both, Mrs. Eddy promised, we will succeed.

I found these ideas deeply compelling and looked forward to putting them into practice. As it happened, it wasn’t long before I had three opportunities to do that.

The first came on Monday morning, when I climbed aboard the crowded New York City bus I normally took to school. The bus was more jammed than usual that day, and the atmosphere was fractious. There was barely enough room for all the passengers, and the pushing and jostling was making everyone testy.

Rather than getting caught up in how unpleasant the situation was and feeling irritated by the people who were elbowing me, I remembered my Sunday School assignment and decided to “stop a war” right there. I determined to consciously love everyone on that bus. I allowed my heart to fill with this love and saw that because God’s love for His creation is infinite, boundless, there was room enough for everyone. There was grace enough for everyone.

This wasn’t an intellectual exercise. I actually experienced a heartfelt love for every individual on that bus. And right away, the whole group calmed down. Suddenly, there was enough room for everyone. There was enough grace for us all. The atmosphere changed completely, and the rest of the trip was perfectly harmonious.

That was a powerful lesson for me on the importance of not reacting, of not indulging in a belligerent attitude or buying into the suggestion that God’s creation could be anything but enfolded by His love and expressive of His love. It was a taste of what it means to practice Christian love, to allow myself to be the expression of divine Love, God, whose presence was more than powerful enough to transform the mood on the bus.

My next opportunity to “stop a war”—to see and demonstrate man’s unity with God—came a short time later. The students and faculty at my college had been in conflict over a number of issues, and I had been invited to participate in a meeting to see if there was any way we could resolve our differences. It quickly became apparent at the meeting, however, that nobody in the room was genuinely interested in reconciliation, and the conversation devolved into a tense standoff.

Once again I prayed, realizing that I couldn’t be on God’s side while aligning myself with either of the human sides represented at that meeting. I needed to let go of my own personal opinions and turn the whole situation over to God. I had to acknowledge God as the only Mind, and therefore the Mind of every one of us, students and faculty alike. That meant we were united as the expression of divine Mind, as children of God, as brothers and sisters.

As I continued to pray, an amazing thing happened. All of a sudden, after one issue of contention was raised, an entirely new solution was proposed, and it was quickly determined to be acceptable to everyone. Then that happened with the next issue. And the next. Before long, every difference that had divided us was resolved, and the meeting was adjourned. This turn of events felt almost miraculous.

I realized that day that a fundamental part of “stopping a war” is being willing to set aside my own opinions. To truly be on God’s side means to let go of any preconceived idea of how a conflict should be resolved, and to focus instead on God’s allness and its inclusiveness of everyone. It is within God’s power to resolve any conflict, and the most effective contribution I can make is to acknowledge the infinite power of Love, allow myself to be the expression of it, and let Love do its job.

Not long after this powerful experience, I had a third opportunity to stop a war, which proved even more dramatic. I had gone to Central Park to participate in a protest against the Vietnam War. The gathered crowd was a large one, so it was troubling when we saw a phalanx of police officers approaching on horseback. This was an era when not all antiwar demonstrations ended peacefully.

The understanding of the oneness of Mind brings unity to the human scene.

I turned to God in prayer. This time it occurred to me that not only did I have to give up the idea that I was aligned with one side of the conflict in that park, but I also needed to let go of my identification of myself as a member of the “peace generation.” That was not an easy thing to do, as a large part of my identity at the time was tied to the antiwar movement. But I realized that I was endeavoring to be a different kind of peacemaker. This required me to acknowledge my true identity—my spiritual identity—as the individualized expression of the infinite One. That was really who I was. And that was who everyone else was as well.

In Science and Health with Key to the Scriptures, Mary Baker Eddy states, “All is infinite Mind and its infinite manifestation, for God is All-in-all” (p. 468). We, all of God’s children collectively, are the infinite manifestation of infinite Mind, and that means there is no room for anything unlike Him. Humanly, of course, that doesn’t mean that we can’t have our own points of view or expressions of individuality. But because we are all the manifestation of the same infinite Mind, we work in harmony with each other, and coexist peacefully, as our true individuality and oneness are understood. The understanding of the oneness of Mind brings unity to the human scene. And even one individual can bring that about through prayer.

So how did the confrontation end? The police simply turned around and left. Then the protestors dispersed. The whole demonstration was a nonevent.

My take-away from this week of “stopping war” was profound. I had a glimpse of just how effective prayer can be when we humbly acknowledge man’s unbreakable unity with God and strive to demonstrate that unity daily. Doing this requires consistent discipline of thought—leaving opinions, assumptions, or a sense of our own rightness outside the door of prayer and recognizing the ability of God, not man, to dispel any discord.

It’s not always easy, of course. But as I have endeavored to practice this approach, I have come to better understand the power behind the oneness of God. Science and Health enumerates its effects: “One infinite God, good, unifies men and nations; constitutes the brotherhood of man; ends wars; fulfils the Scripture, ‘Love thy neighbor as thyself;’ annihilates pagan and Christian idolatry,—whatever is wrong in social, civil, criminal, political, and religious codes; equalizes the sexes; annuls the curse on man, and leaves nothing that can sin, suffer, be punished or destroyed” (p. 340).

Seeing such results reflected in human experience may at times seem a daunting task, but as I’m continually learning, one on God’s side really is a majority. Each one of us can make a powerful contribution to stopping wars—and preventing them from starting—right where we are. We can all be peacemakers. 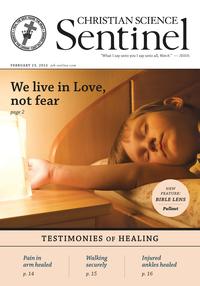