On Thanksgiving Morning, my cousin confronted our grandmother in the kitchen and told her she was going to hell.

Happy Thanksgiving, I thought—while he stood there, smug and holier-than-thou. I definitely thought some other things about my cousin and his super-religious family—and they were not exactly thoughts of gratitude that these relatives were going to be joining us for the day’s festivities.

Only one person seemed unperturbed by the confrontation: the person who was, apparently, going to hell. Our grandmother, who’d raised seven children and grandmothered 22, looked at my cousin with pure love. And though I don’t remember how she responded—or if she responded at all—I do remember one thought that penetrated my fog of anger: This was a woman who knew all about grace.

Nothing compared to the power I felt when I was able to forgive and love.

I didn’t know about grace on that Thanksgiving—not really, anyway. And I wasn’t interested in being merciful. I wanted my cousin to know he was wrong about our grandmother and her beliefs. Better yet, why he was wrong. Honestly? I thought I was smarter than he was, and I was sure I could out-argue him during our post-turkey-dinner Bible debate.

But it was an unsatisfying victory. I returned to college feeling like I’d let someone down. My grandmother, maybe, but also myself. I kept thinking about her demeanor that morning—the effortless mercy that wrapped my cousin in love and wouldn’t let go.

Could I do the same? Could I redeem my Thanksgiving? Better yet, could I extend the blessing I’d received from my grandmother’s example into the rest of my year?

Yes, I thought. I could. I had to. I’ve always thought of Thanksgiving as a day about giving—not just giving thanks but also sharing the bounty of God’s goodness with strangers and family alike. But I knew that year I’d come up short. I’d been charitable with everyone, except maybe the person who’d needed my kindness the most.

What saved me as I set out to redeem my Thanksgiving was a simple message that came as I wrestled with my feelings about my cousin: Grace, like every other good quality, has its source in God, not in us. The Bible puts it this way: “We love [God], because he first loved us” (I John 4:19). In other words, I didn’t have to create mercy. I didn’t have to muster up the necessary love and charity. I love because God loves everyone. I express grace because of the amazing grace I’ve already been given.

As I embraced grace more fully in my thoughts and actions over the next few months, I stopped caring about making my cousin see how wrong he’d been. I was too busy continuing to celebrate Thanksgiving: the bounty of God’s grace that renews and transforms every heart. I found I was being kinder to myself and more charitable to others.

And I discovered something I’d never known before. There was power in grace. I’d thought that being right—and making sure others knew it—was powerful. But nothing compared to the power I felt when I was able to forgive and love, when I was able to let go of my own strongly held opinions and embrace a divine perspective.

As it turned out, that Thanksgiving feeling lasted the whole year. I felt some sharp edges to my character being softened. I became less inclined to react and more inclined to be tender—to love. And I gained a better understanding of this statement by Mary Baker Eddy: “What we most need is the prayer of fervent desire for growth in grace, expressed in patience, meekness, love, and good deeds” (Science and Health with Key to the Scriptures, p. 4).

That’s a prayer that has marked my holidays, and every other day, since then. And I have my grandmother—and my cousin—to thank. 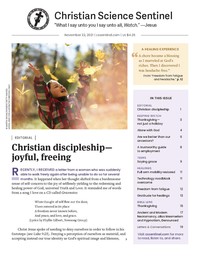