Everyday decisions, such as turning down the thermostat or seasoning the soup, often call for delicate judgment. They need to be neither too little nor too much, but just right. With more intangible things, gauging correctly is even more important. Too much head and too little heart can ruin a relationship. So can too much heart and too little head.

How can we hope to gain this judgment more consistently? The issues themselves may not seem significant, but they add up to either order or disorder in our lives. Human experience and finesse aren't enough. We need something of the spiritual intuition that enabled Christ Jesus to know where the tax money would be found, to locate the room for the Passover, and to feed the multitude in the desert.

Jesus made it clear that his ability to do such things so effortlessly wasn't a mysterious personal prerogative of his own. It came from his continual responsiveness to God, the Principle of the universe—a kind of ongoing, wordless prayer. And Jesus expected his followers to cultivate this responsiveness so that they too could feel the prompting of the Christ in individual consciousness, which would make them do the right thing—not only in major ethical matters but also in precision of detail in everything they had to do.

The purpose of this wasn't to prevail on God to make things go right for them or to achieve a kind of spiritual one-upmanship over other people. It was to demonstrate the unity of Principle and its ideas. The concept of God as Principle implies a fundamental governing power underlying all creation and embracing it. This Principle is invariable, consistently supportive, never harsh or remote. It's the moving force behind the divine order of being.

This divine order isn't a faraway future paradise, or a humanly organized Utopia, or a rigorously imposed authoritarian system. Instead it's a mental and spiritual state in which Principle directs and coordinates all its own creation, including man. In short, it's Principle in action. The Bible describes it this way: "Dost thou know the balancings of the clouds, the wondrous works of him which is perfect in knowledge? ... Who hath put wisdom in the inward parts? or who hath given understanding to the heart?" Job 37:16; 38:36.

Being in harmony with the divine order doesn't mean acting out a preordained human destiny or invoking intervention from an anthropomorphic Deity. It's quite simply learning to have a minute-by-minute understanding in the heart, to think and feel from a spiritual standpoint. We can do this as we pray earnestly and begin to identify ourselves as God's idea, the expression of Principle, created to share and implement the divine order. Nothing short of perfection can do justice to the perfect Principle man reflects.

Mrs. Eddy, the Founder of Christian Science, says, "Let us open our affections to the Principle that moves all in harmony,—from the falling of a sparrow to the rolling of a world." Miscellaneous Writings, p. 174. Affection and Principle aren't usually associated by the world. And we mightn't always think of religious sentiment as just what's needed for a cook to turn out a perfect soufflé, or a mechanic to tune an engine finely.

Yet it's recognizing this aspect of man's being—his natural responsiveness to Principle—that so often makes for inspired craftsmanship and precision work. It's feeling something of what it means to be the expression of Principle in action. It's being motivated by a deep desire for order and harmony and rhythmic sequence for their own sake. And this helps to bring out in us an innate feeling for whatever is nearest right and best for everyone in any human situation. Then good judgment and clear perception become more spontaneous, whether we seem to be dealing with a major crisis or a small domestic task.

Why does it sometimes seem difficult to maintain this attitude of responsiveness all the time? Because we tend to think of ourselves as casual mortals, prone to go wrong, sometimes responsive but often resistant, and all too frequently erratic and unreliable, doing either too much or too little.

Mrs. Eddy writes, "Human concepts run in extremes; they are like the action of sickness, which is either an excess of action or not action enough; they are fallible; they are neither standards nor models." She states on the next page: "Instead of relying on the Principle of all that really exists,—to govern His own creation,—self-conceit, ignorance, and pride would regulate God's action. Experience shows that humility is the first step in Christian Science, wherein all is controlled, not by man or laws material, but by wisdom, Truth, and Love." Ibid., pp. 353–354.

To be conceited, ignorant, or proud—a kind of self-satisfied "Mr. Right"—is to be virtually ungovernable, and is to deprive oneself of the orderliness of good government. And a human sense of inadequacy and tentativeness has much the same effect. But there's nothing strange or remarkable about wanting to be responsive to divine Principle when we see how much this helps us to avoid doing everything by trial and error and accepting a lot of possible wrong alternatives for every right one.

And what about the economic field, where decisionmaking often seems so crucial—whether in family budgeting or on an international scale? Through prayer we can gain a higher sense of economy. The divine economy is part of the divine order. It represents the infinite potential of ideas wisely and impartially employed, with neither too much supply and too little demand nor too much demand with too little supply.

This should also be the guide for the human economy. Centuries ago the children of Israel learned the practicality of the divine economy when they were fed with manna in the wilderness—a place where there seemed to be too little of everything except privation. The manna represented divine provision, but it had a very practical human form. It wasn't an automatic handout. Every man had to do his own gathering—not too much, which would be greedy and wasteful, and not too little, which would misrepresent God's gracious provision.

We read in Exodus: "And Moses said unto them, This is the bread which the Lord hath given you to eat.... Gather of it every man according to his eating.... And the children of Israel did so, and gathered, some more, some less. And when they did mete it with an omer, he that gathered much had nothing over, and he that gathered little had no lack; they gathered every man according to his eating." Ex. 16:15–18.

Gathering thoughts must be done on much the same lines. Nobody else can gather our thoughts for us, and we shouldn't just accept all the thoughts that are offered to us without question. The supply of sound ideas from divine Mind is always plentiful. But the right ideas have to be recognized through prayer and put to effective use before they can do their work for us.

Utilizing ideas in this way represents an alignment of thought with divine Principle that enables us to demonstrate more of the divine order of being, the natural expression of divine RIghtness without too much or too little of anything good. 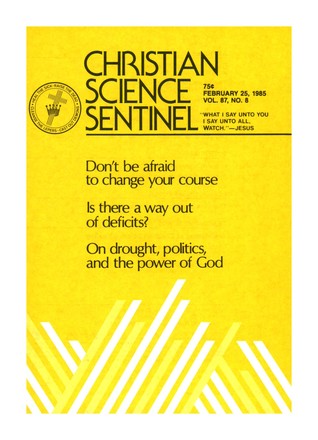 Don't be afraid to change your course

The basis for making decisions

[Jesus] disavowed entirely the idea that sickness was sent by God...

On drought, politics, and the power of God

DID YOU EVER WONDER?

Is there a way out of deficits?

While in my second year of high school I had...

One day I was at school, and a little girl accidentally stepped...

The opportunities of being raised in a home where Christian Science...

I wish to express my gratitude to God for a healing I had...