I enjoy traveling. It expands my horizons, introducing me to new people, ideas, and ways of doing things. However, the thought of getting on a plane, train, or even in a car can cause one to hesitate today. Reports of safety concerns appear frequently in the news: the threat of terrorism, severe weather, the unlawful use of cellphones while driving, and the influence of alcohol and drugs in transportation-related incidents, to name a few.

These issues can lead individuals to curtail or even eliminate the use of certain modes of travel. But there is a way to address these safety concerns that gives us the confidence to go forward in complete peace and safety. It is the way of prayer.

As we humbly seek divine help, we are given the ability to understand that the one all-loving God is continuously guiding and protecting us. Each of us has the ability to receive and to follow that divine guidance and to experience the blessings of God’s protection. Before a trip, I put every aspect of my travel in God’s tender, loving care, and I include everyone in these prayers. I know that because God is Love, He cherishes each one of His children and keeps us safe wherever we go; because God is Mind, the only Mind, He intelligently governs all action and movement in the universe, and this movement reflects the harmony of Mind, in which there is no chance of accident or disruption. This truth is demonstrable.

In my prayers, I affirm that divine Mind unerringly directs all action; therefore, man, Mind’s reflection, naturally and unerringly obeys. This prayer is based on the following basic truth in Christian Science found in the textbook, Science and Health with Key to the Scriptures: “Accidents are unknown to God, or immortal Mind, and we must leave the mortal basis of belief and unite with the one Mind, in order to change the notion of chance to the proper sense of God’s unerring direction and thus bring out harmony” (Mary Baker Eddy, p. 424). With this inclusive prayer, my thought is filled with gratitude and an expectation of an orderly, peaceful, and joyous trip.

The importance of this all-embracing prayer was evident to me on a flight home from a vacation several years ago. Although we were able to fly through and out of two storms, later in the flight the pilot informed us that the plane had sustained damage to the nose gear in the storms. We were being rerouted to a large international airport better equipped to handle an emergency landing than the small regional airport that was our destination. We were instructed to comply strictly with all of the crew’s instructions in preparation for an emergency landing.

At first I just desperately wanted to be someplace else. But I quickly realized that was not a helpful attitude. I tried to pray to overcome my fear, but I admit I was not making any headway. Then I looked into the eyes of the flight attendants as they were giving us instructions and realized they were terrified. That woke me up, and I knew then that I needed to pray for the safety of everyone on that plane. As that selfless desire took hold, spiritual inspiration poured into my consciousness.

The atmosphere in the plane shifted to quiet calm.

The first thought that came to me was a paraphrase of the 23rd Psalm: “The Lord is our Shepherd; we shall not want.” This spoke to me of each individual on that plane being directly under the care, guidance, and protection of the same Shepherd, the one God. I affirmed that not one of us—whether pilot, crew, or passengers—ever “wants,” or lacks, the ability to do the right thing at the right time, thereby ensuring the safety and order of everything and everyone on that plane. All were equally loved and intelligently directed by the one divine Mind, or God. The tenderness and confidence this inspired sent a wave of peaceful calm over me, and I felt divine Love’s presence. One reassuring idea after another from the Bible and Science and Health filled my thought.

The instructions the flight attendants were giving made it clear they were preparing for the possibility of flames during the landing. Immediately, Jesus’ assurance “the very hairs of your head are all numbered” (Matthew 10:30) came to me. I unequivocally accepted the truth of that promise for all of us. I realized that since God was preserving me even to the detail of each individual hair on my head, then I had to be totally safe in every respect. I could trust God’s comprehensive care and not be afraid.

I was in awe as God’s love and care became tangible. The atmosphere in the plane shifted to quiet calm. It was even evident in the eyes of the flight attendants, who no longer looked terrified.

As we made our landing approach and were instructed to assume the brace position, I heard, as if it were spoken aloud, the words: “Fear ye not, stand still, and see the salvation of the Lord, which he will shew to you to-day” (Exodus 14:13). Those are the words Moses spoke to the children of Israel just before the parting of the Red Sea, which secured their deliverance from the Egyptians pursuing them.

I felt no fear. We made a perfect landing, and the pilot announced, with wonder in his voice, “Ladies and gentlemen, we seem to be all right!” Everyone cheered, with tears of gratitude flowing freely. Looking out the windows, we saw that the runway was lined with fire engines and emergency vehicles. I was so deeply moved that it was quite a while before I could speak.

Two weeks later I had an opportunity to see just how completely any fear of flying had been removed. A friend invited me to take a ride in his two-seat experimental aircraft. I accepted without hesitation. My seat was a wooden board positioned in front of the pilot, and the plane was an open design. Flying close to the ground, with the wind in my face, I experienced what it truly feels like to fly. It was exhilarating!

While praying to calm the fear of others on that previous cross-country trip, I was freed from fear myself, and that freedom has continued with me on every flight I have taken since then. It has enabled me to help calm the fears of seat mates and not be alarmed by predictions of poor weather conditions or air turbulence, as it has strengthened my trust in God’s continuous, harmonious control over all conditions.

Each of us is given that trust from his loving Father-Mother God, and can unreservedly say, “You alone, O Lord, keep me perfectly safe” (Psalms 4:8, Good News Translation). 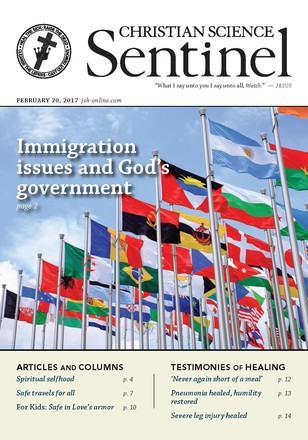 Safe travels for all

By The Christian Science Board of Directors | February 2017

‘Never again short of a meal’

Freed from concerns about driving

By The Monitor’s Editorial Board | February 2017

Prayer that is dependable