After working one year at a major magazine in San Francisco, I received my first performance review from my new boss. And he told me outright that even though I was doing a decent job, I was the hardest person on the team to work with.

A shock, yes, because when I'd started there, the work had been fun and creative. Everyone on our small team seemed to love and appreciate art and avant–grade music. Because we were all in one room together, we'd gotten to know each other pretty quickly. Since we'd work late nights and had to move quickly on a lot of projects, good communication and camaraderie were key.

When my first boss resigned, six months after I was hired, the company decided to fill the position from outside the organization, passing over our senior team member, who we all thought was better suited for the job. Ultimately, everyone on the team felt snubbed. And this set the stage for negative feelings toward the new boss.

It didn't take long for the entire team to begin disagreeing with him, and there was a constant undercurrent of defiant opposition to his authority. We all seemed convinced that he was in the wrong place, at the wrong time, and we didn't want to work with him. In fact, I think we may all have had an unspoken hope that if we continued to give him the cold shoulder, he might even quit. But our boss wasn't about to leave–and we found ourselves embroiled in a silent but persistent power struggle.

I'd gotten so I could hardly stand to be in the same room with this man. My annoyance turned into anger as I sided with my teammates' opinions, joining in with them whenever they openly criticized him or questioned his decisions. I recall a time when he wanted to demonstrate a technical procedure in Photoshop to me, and instead of listening to his instructions, I asked myself, "Why is he trying to take over my work?" I certainly wasn't planning on following his directions–and I definitely didn't think he had the right to question my job skills. So I pushed back.

This was a time when I wasn't particularly consistent in my study and practice of Christian Science, so I never really stopped to pray about this situation, or even consider what a more spiritual view of it might be. That is, until the loss of a friend of mine, prompted a shift in my focus. I began to reach out in prayer for comfort, and to feel God's power in my life. I took time to acknowledge how grateful I'd been for that friendship. Then I found myself asking a tougher question: "Shouldn't I be grateful for everyone in my life–co–workers included?" I had to admit to myself that the harsh opinions I had about my boss, and taking sides to subtly manipulate him, were the opposite of acknowledging God's total control of my life.

Up until this realization, I'd been influenced by fear about the course of my career and anger that this new boss might mess up things for me and my team. I'd even begun sending out resumes to other companies and thinking about moving to another city. I knew a change was needed, and although this moment of clear insight didn't bring about an immediate transformation, it got things moving in a new direction. I saw that I needed to change my thinking, not my physical circumstances.

As time went on, I yearned to know myself better as God's child, entirely spiritual, and I knew I needed to see my co–workers in the same light. I resolved to pray and study the Christian Science Bible Lesson more diligently. By taking this step, I found I truly wanted to know God as the only power at work in my life, my consciousness, and my being. I knew that if I was more open to His view, I could also expect to see the power plays going on at work eliminated.

And this leads me back to that first performance review. When my boss scheduled the meeting for the review, I wondered if he'd noticed what a jerk I'd been. He had. That's when he said I was the hardest person on the team to work with. It might sound ironic, but what he said actually confirmed to me that I was on the right track. I finally woke up to the fact that my unkind actions were completely counterproductive and ultimately powerless to help me or anyone. I could see without a doubt that supporting my boss was essential. His constructive criticism alerted me to the need to let Love take over my thoughts and actions. As Science and Health states, ". . . spiritual Love will force you to accept what best promotes your growth" (p. 266). This helped me begin to see that God's power is a loving force that corrects and heals, and that any attempt to exert our own sense of power is ultimately futile.

The first step out of this mess was in seeing and loving the good qualities in myself—seeing my true, spiritual identity—and then doing the same for those around me. But I also realized that I needed to take a firm stand with my co-workers when they were trying to influence the group by criticizing our boss. I could no longer side with them and still expect progress. As I prayed about how to do that, I felt God would lead me in a way that would avoid confrontation. That was important. Since we'd been complaining for an entire year, it had become a bad habit. We'd built up a front of self-defense and self-justification for our actions, and I knew I needed to break through this vicious cycle.

I decided to practice my prayers by quietly and persistently not going along with the complaints. I prayed to know that, as Mary Baker Eddy wrote, "The good you do and embody gives you the only power obtainable" (Science and Health, p. 192).

This eventually led me to have the courage one day to flatly disagree when my co-workers began to "diss" the boss. I spoke up and said, "You know, I don't think he's a bad guy. In fact I think he's cool."

That was somewhat shocking to my colleagues. But I noticed the complaints began to taper off after that, and the office tension and maneuvering began to recede. As things shifted toward a positive perspective in our office, I began to see the truth in this Bible statement: "Love is not envious or boastful or arrogant or rude. It does not insist on its own way; it is not irritable or resentful; it does not rejoice in wrongdoing, but rejoices in the truth" (I Cor. 13:4-6, New Revised Standard Version).

As I put my prayers into practice, day by day, my former struggles subsided, and I no longer questioned and defied my boss's authority and position. In fact, to my surprise, I even began to notice his strong points—such as his humility and even his creativity. Our relationship normalized, and I no longer dreaded working with him.

I had to admit to myself that the harsh opinions I had about my boss, and taking sides to subtly manipulate him, were the opposite of acknowledging God's total control of my life.

A year later, during my second performance review, my boss told me how he'd appreciated my presence in the office, and that he'd seen quite a change in me during the year. He also said that he felt my work, productivity, and ability had grown. I knew this was all because of prayer.

Soon after that, our company began to outsource the work my team and I did as a cost-saving measure, so I was only in the job for a few more months. But I left with a clear sense that the only power to lean on is God's. |

Tad Blake-Weber is a graphic designer for the Sentinel and a Christian Science practitioner. He lives in Waltham, Massachusetts. 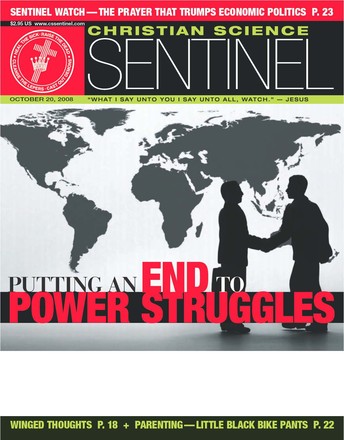 God's power in my life

Russia's invasion of Georgia—and how prayer can bring peace

My way to shine

THE TEST THAT EVERYONE WILL PASS

THE PRAYER THAT TRUMPS ECONOMIC POLITICS

FROM VOLATILITY TO STABILITY