FROM THE EDITORS September 8, 2008 ISSUE

THE POWER OF INTUITION

THE PURPOSE OF ANY ABILITY TO SEE BEYOND THE HUMAN SCENE AND GLIMPSE GOD'S VIEW IS ALWAYS FOR HEALING, AND CAN NEVER HARM.

WHAT IF THE common phrase, "Money makes the world go round," was actually, "Spiritual intuition makes the world go round"? Think about it. Without intuition—ideas that inspire, guide, and lead to right decisions—the good we see and experience wouldn't be. Mary Baker Eddy, the founder of this magazine, wrote: "God gives you His spiritual ideas, and in turn, they give you daily supplies. . . . What a glorious inheritance is given to us through the understanding of omnipresent Love! More we cannot ask: more we do not want: more we cannot have" (Miscellaneous Writings 1883-1896, p. 307).

Each one of us has access to this understanding by divine inheritance. And since good has its origins in God, then what we see and experience must come from our deep connection to our Creator and our obedience to the ideas He gives. The Bible is full of examples of the great value placed on wisdom and intuition. When asked what he wanted most, Solomon replied, "Give [me] an understanding heart to judge thy people, that I may discern between good and bad" (I Kings 3:9). Not material wealth, not fame, long life, or power, but right thinking and the ability to know what is good and act on it. Joseph rose out of slavery and earned the Pharaoh's trust based on his obedience of God's messages. A poor wise man is credited with delivering an entire city because of his wisdom (see Eccl. 9:15). And when Abigail followed through on her spiritual intuition, she saved her husband and prevented David's vengeance against her community and household, something David acknowledged in his own words: "Blessed be thy advice, and blessed be thou, which hast kept me this day from coming to shed blood" (I Sam. 25:33).

How many of us truly value what could rightly be called our greatest asset—the spiritual sense to see beyond a present human predicament toward a solution that saves and solves? Interestingly, companies and celebrities have reportedly paid top dollar—up to $10,000 a month—for the counsel of Laura Day, a woman whose job is, as she puts it, "an intuitionist." Though she knows "next to nothing about business," her consultations have led to a booming career with a waiting list, built entirely through referrals. Still, according to CNN.com, "she refuses to think of herself as special. 'We all have the power of intuition,' she says. . ." ("Celebrities, companies bank on her intuition," Lola Ogunnaike). If nothing more, this example points to the fact that business savvy and intellectual prowess don't always carry the day; there's a clear recognition that something more is often needed.

We maintain that this something more is found by looking to the divine Mind—rather than human minds—for intelligence and right ideas. Which is why there's no relationship between clairvoyance and intuition. Mrs. Eddy described the latter not as a sixth sense, but as "Soul-sense" or spiritual sense. She wrote about the intuitions that "reveal whatever constitutes and perpetuates harmony, enabling one to do good, but not evil" (Science and Health with Key to the Scriptures, p. 85). And she emphasized this point over and over in her writings, that the purpose of any ability to see beyond the human scene and glimpse God's view is always for healing, and can never harm. This same Soul-sense, she observed, is what enabled Jesus to heal. He was so in tune with the divine will that he perceived thought with an accuracy and precision that caused those he encountered to recognize his divine sonship. The Samaritan woman he met at a well proclaimed, "Come, see a man, which told me all things that ever I did: is not this the Christ?" (John 4:29).

Jesus' mission was to point out our connection to God, our inseparability from Him, and thus our 24/7 access to His ideas. The today-present Christ—"the divine message from God to men speaking to the human consciousness" (Science and Health, p. 322)—never separates thought from its source, acknowledging the divine Mind as all that can ever truly inform, direct, and create. As we each cultivate this spiritual understanding, our thoughts and decisions will be more than hunches or feelings. They will instead be strong convictions coming straight from our Counsellor.

Practitioners of Christian Science are able to heal to the degree that they, too, seek God's counsel, exercising their spiritual faculties to see beyond the human scene, and then keeping their thought—and that of the patients they pray for—focused on spiritual truth. It's through prayerful intuition and obedience to divine Mind's bidding that they witness healing.

Referring to his healing ministry, Jesus said that those who followed his teachings and trusted in God's healing power would do greater works than he did. Why would he have said that? Not because he had great faith in human ability, but because he had infinite faith in divine Mind's capacity to communicate its ideas, and infinite trust in the innate ability of men and women to receive and respond to spiritual intuitions. This most precious communication is ours to trust today. css 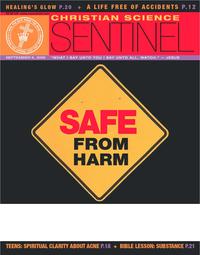