Mental health is an issue that is often examined by the media, debated in political spheres and health insurance companies, and discussed widely on college campuses. Yet some of these discussions and debates are stunted by the “taboo” nature of the topic, and effective solutions remain elusive. The seeming prevalence of depression, anxiety, and stress indicates that many are still struggling to find permanent relief from the symptoms.

I understand. I’ve been there. I was one of those struggling to find reprieve from the constant roller coaster of highs and lows and the anxious and sometimes suicidal thoughts that would paralyze me with fear. And yet, I learned that there is a power greater than the seeming power of such dark thoughts. This power is God, who shined a light so bright as to permanently dispel the mental darkness I was experiencing, which led to a complete and permanent healing of depression and anxiety.

This light came when I was reminded about the power of God, divine Love, who created us. I came to understand that reflecting God’s goodness is inherent to my nature because I was created in the image and likeness of the Divine—whole, complete, and entirely good, as stated in the first chapter of Genesis in the Bible.

In her seminal book, Science and Health with Key to the Scriptures, Mary Baker Eddy defines God with synonyms that can be found in the Bible; one of these synonyms is Mind. The truth that God is divine Mind gets to the crux of mental health. Mrs. Eddy states in Science and Health: “To begin rightly is to end rightly. Every concept which seems to begin with the brain begins falsely. Divine Mind is the only cause or Principle of existence” (p. 262). Because we reflect God, who is perfect Mind, His perfection is reflected in us as sound mental health. There is nothing imbalanced or depressed about God—divine Love, Life, Mind—so there can be nothing in His offspring that is out of balance or depressed.

The truth that God is divine Mind gets to the crux of mental health.

While I now know this to be true, this realization didn’t come without a struggle. I often had trouble sleeping, unable to turn off the endless cycle of rumination, and sometimes I would fear sleep because I would have terrifying nightmares. At other times, I would awake in the early morning hours overwhelmed by panic and fear. Some days it would seem that everything around me was bright and sunny and that I had a great life and all was well, while inside I felt a deep, dark sense of hopelessness and anguish. Sometimes I couldn’t get out of bed to face the day, and I would think, “I shouldn’t feel this way. What’s wrong with me?” When people would say that I should be happy, I would think, “Don’t you think I would if I could?”

During this time, I worked for an international organization and traveled all over the world, frequently working and traveling alone. I was not practicing Christian Science and had strayed pretty far from the ideas and truths I had learned in the Christian Science Sunday School in which I was raised. I knew I needed to talk to someone, so I visited a psychologist,  who determined that I was suffering from mild depression and anxiety.

Eventually, I left that job and found something more stable with no travel. Despite the change in my occupation, however, the depression and anxiety became more aggressive, and I engaged in self-destructive behaviors.

After a while, the psychologist suggested that I see a psychiatrist for a medical diagnosis and a prescription for medication. I was officially diagnosed with depression and anxiety, and it appeared that I would be on medication for the rest of my life in order to feel “normal.”

However, I never felt normal on the medication either, and there were a number of side effects as well. I definitely wasn’t joyful or free.

I had gotten so far away from what I had learned as a child about God’s love that I wasn’t even sure if I believed in God. But I reached out to my sister, who is an earnest student of Christian Science and who graciously answered my many questions with the greatest of patience. I became more certain that healing could be found in Christian Science and that what I had loved about prayer as a child was still available to me.

I began studying the Bible and Science and Health. A friend who is a Christian Science practitioner guided me to passages that spoke about God as Mind. During this time I came across this statement in Science and Health: “Remember, brain is not mind” (p. 372). This helped me to see more clearly my true identity as God’s, perfect Mind’s, reflection. I felt sure that my brain had nothing to do with my true identity, because divine Mind is the only source of my being, and therefore, the only source of true thoughts. Because God, Mind, is all good, dark or frightening thoughts were not my thoughts. I felt assured of God’s presence, and I knew with utter certainty that I had been healed.

I stopped taking the medications. I spoke with the practitioner and told her of my decision and that I knew the healing was complete. I asked her to pray for me because both the psychologist and the psychiatrist had warned that if I stopped taking the medication, it should be done slowly for fear of worse side effects. In spite of these predictions, I experienced no such side effects. I was free!

I felt sure that my brain had nothing to do with my true identity, because divine Mind is the only source of my being.

I wanted to let the psychologist know that I was healed and that I had stopped taking the medication. I was both nervous and excited to tell her. But I prayed to know that all of God’s children are governed by the one Mind, and that this included both the psychologist and me. She was very understanding and did not mention any of the predicted side effects. Soon, this relationship very naturally came to an end as I grew in my understanding of and reliance on God. In fact, I realized that I could talk to God when I was in need of counsel or guidance.

I also never returned to the psychiatrist or any other doctor and never felt the need to take any further medication, as the depression and anxiety had been completely dispelled. Some years later, it occurred to me that all of the negative thoughts and imaginings of terrible things that could happen had disappeared, and even some anger issues that had seemed to be a part of the problem had simply melted away.

Mrs. Eddy writes: “Mind that is God is not in matter; and God’s presence gives spiritual light, wherein is no darkness,” and, “Divine Love is our hope, strength, and shield. We have nothing to fear when Love is at the helm of thought, but everything to enjoy on earth and in heaven” (Miscellaneous Writings 1883–1896, p. 113).

How true this is! This healing occurred almost a decade ago, and the freedom and joy it has brought are almost indescribable. Instead of simply managing depression, we can allow the light of divine Mind to outshine the darkness of depression and replace despairing and fearful thoughts with complete peace and exuberant joy. 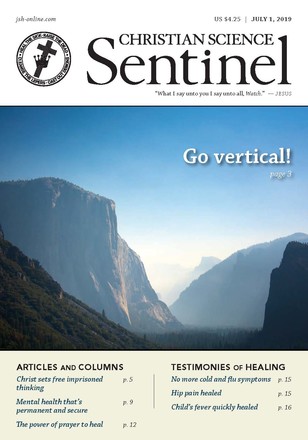 Reluctant to pray for the world? Roll that ‘stone’ away.

The power of prayer to heal

Which thoughts are you listening to?

No more cold and flu symptoms

What problem are we trying to solve?