I'M an avid Nordic skier. I've been skiing for seven years, and for me it's pure joy. There's a quote from the movie Chariots of Fire that refers to praising God and goes like this: "... when I run, I feel His pleasure." This perfectly mirrors how I feel on the ski track: When I ski, I feel God's pleasure. When I compete in Nordic, life feels boundless. I've always found that Christian Science helps me in Nordic—I always turn to God before races to remind myself of my spiritual perfection. I visualize the upcoming race, and replace any doubts by affirming that I express spiritual ideas, such as strength and grace.

I first got involved in Nordic when I was nine years old. Several of my friends got involved, and I was curious about the sport. Nordic has a strong program in Durango, Colorado, where I live, and there are lots of reputable coaches in the area, so I decided to jump on board. Nordic skiing is not an easy sport. It involves cross-country, ski jumping, and other events, and is often very taxing. With uphill and downhill courses, it demands a high level of strength and agility. To be successful, I've had to learn to overcome physical and mental weakness.

I compete in the Rocky Mountain Nordic division, or RMN, one of the fiercest in the US. At times the workouts can be quite challenging, especially before big races. During the last season, I strove to qualify for the Cross-Country Junior National Olympics. The competition was to be held in Truckee, California, and only the top nine skiers in my division would be able to go there to compete. Those nine would make up the Rocky Mountain Nordic Ski Team, representing our division at the Junior Nationals. At the end of our regular season, I was right on the edge of achieving this honor. I'd had a strong season, but there were two other guys who were nipping at my tail in all the races. My place in the standings was precarious.

There is a strong sense of camaraderie among all cross-country skiersall the team members are good friends and we hang out together, so there's not a sense of cutthroat competition. But the final competition was very stressful for me because I was on the brink of making the Junior Nationals. This made me apprehensive about the results, and I wasn't at peace about things.

One day, about a week before the last qualifying 5-kilometer race of the season, I started to feel a headache coming on. As a Christian Scientist, I've always found relief from headaches and other problems through prayer. And I've had good physical healings in the past, such as last summer when my wrist healed very quickly after I injured it while mountain biking with the Nordic team. However, in this case I didn't immediately turn to prayer. Instead, I tried to ignore the problem, thinking that if I drank enough water to fully rehydrate myself it would go away.

Unfortunately, when I woke up the next day, the headache was still there. At this point, I realized that the situation needed to be handled spiritually. I called a Christian Science practitioner, who suggested that I take a look at some passages on page 14 of Science and Health. The passage that jumped out at me was this one: "Become conscious for a single moment that Life and intelligence are purely spiritual,—neither in nor of matter,—and the body will then utter no complaints." As I pondered the line, I began to feel much closer to God's presence. But it did not bring about the instantaneous healing I hoped for.

I always turn to God before races to remind myself of my spiritual perfection.

I continued to struggle with the headache off and on over the next couple of weeks, although I kept up with my activities. I knew I needed to see that this didn't originate in my body, but that it was a mental misconception. I saw that I needed to reject it as never having been a part of me in the first place. I prayed about this issue and about the pressure I was feeling because of my upcoming race in Nordic and my worries about making the team. I continued training for the race and praying with the support of the practitioner.

The day before my family and I left for the final race, I received an e-mail with the current standings for the Junior National Ski Team. Imagine my joy when I found that I was in ninth by a good 20 points—a solid standing! The headache disappeared temporarily in my excitement. But as I continued to study the results in depth, I noticed that a guy who had placed first in the only race he had been to was racing again, a factor that would bump me to tenth place, and out of the Junior National standings.

This came as a huge blow. Suddenly I felt the headache coming on again. But I knew that it hadn't come from God, and I immediately put up a firm stand. I felt clearly that my identity was spiritual, and as I silently claimed my freedom, the headache disappeared and did not come back. This was a major triumph—I saw that the headache had never been a part of me.

The next day came the big races. Just before the competition, I prayed to see myself as an expression of Spirit. I sat quietly by myself, as I usually do before races, to calm my thought and focus on my spiritual perfection. I visualized the race and knew that I would be able to express God through power and grace. I also sang a few hymns to myself to focus on their messages of strength. And, buoyed by the spiritual confidence I'd gained from my healing, I went on to ski the two best races of my life. I gained 15 points on my fellow competitor and best friend, Ben, who was in ninth place.

In spite of my performance, I barely missed qualifying for the Junior Nationals, a triumph and a disappointment all in one. I had, however, gained a much more important spiritual victory. I had acknowledged myself as spiritual and trumped a false material sense of myself. This healing has played a big role for me in terms of how I think about Nordic. Not only am I calmer before races, but I don't stress about results or my place in the standings now. Though I'm taking a break from Nordic this year to attend boarding school, I'm looking forward to competing again next year and expressing spiritual dominion! | 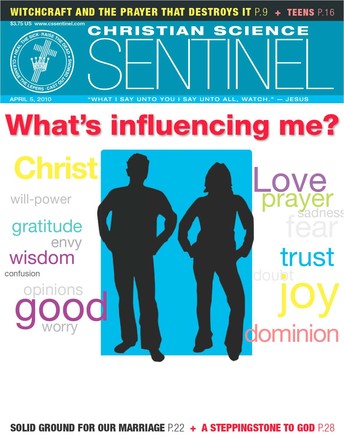 WITCHCRAFT AND THE PRAYER THAT DESTROYS IT

I DIDN'T HAVE TO DRINK ALCOHOL

Honduras rebuilds ties with its neighbors

STRENGTH ON THE NORDIC SKI TRACK

FREE OF THE PAST

A LESSON FROM TOBY

SOLID GROUND FOR OUR MARRIAGE

SECURITY IN AN OPEN SOCIETY

HEALED OF LEG INJURY AND HEARTBREAK

HEALED OF HAY FEVER AND MORE

A STEPPINGSTONE TO GOD