Then I read the story of Jonah. Briefly: Jonah is sent by God to Nineveh to tell its people that their city will be destroyed because of their wickedness. Jonah doesn’t want to do this and “escapes” by going to sea. During a raging storm that follows, he tells the ship’s sailors to throw him overboard because he believes his disobedience is the reason for the storm.

In the water, a big fish swallows Jonah, and in the fish’s belly Jonah prays and repents of his disobedience. The fish vomits him up safely onshore. Finally, Jonah goes to Nineveh. The people listen to him; they repent and turn to God.

Jonah still feels these people should be destroyed. Yet God shows Jonah that He is merciful and that the people of Nineveh are worthy of being saved.

I felt prompted to think about this story as it might relate to praying for Syria. A little research showed me that Nineveh was a city in the ancient kingdom of Assyria, now Iraq and Syria.
I thought about Jonah’s initial reluctance to go to Nineveh. The people of Nineveh were not Hebrews, descendants of Abraham, and did not worship the one God. They had their own gods.

For me, it seemed easy to understand Jonah’s reluctance to warn these people about God’s displeasure. I wondered if that could be likened to not knowing how to pray for Syria—perhaps not praying at all, or wondering how prayers could or would help.

Then, I thought of Ananias going to Saul at God’s bidding, immediately after Saul’s conversion to Jesus’ teachings, and healing him of blindness (see Acts 9:1–18). Ananias, a follower of Jesus, knew Saul’s history of cruelty in punishing Jesus’ followers. Ananias was afraid to go to Saul, but God’s direction was clear and Ananias obeyed.

Doesn’t God, divine Mind, tell us what to know and say and pray in any circumstance? God prepares the way for us, even prepares receptive thoughts, so that the Christ can be recognized as being present everywhere. As Mary Baker Eddy writes in Science and Health with Key to the Scriptures, “The ‘still, small voice’ of scientific thought reaches over continent and ocean to the globe’s remotest bound” (p. 559).

God prepares the way for us so that the Christ can be recognized as being present everywhere.

Wouldn’t we be like Jonah if we doubted our prayers would do any good? Isn’t that a frame of mind that makes us feel helpless, uncaring perhaps, and that suggests Christian Science is ineffective? Mary Baker Eddy refers to this kind of thinking as “mortal mind” because it is apathetic, incapable, and accedes to the claims that war, disease, and death are real, and that we can do little to overcome them. If we don’t challenge this thinking, we find ourselves unable to help and heal. Instead of focusing on trying to stop the warring factions, we can see the Christ—the expression of God’s love for humanity—lifting all parties above the seeming reality of the war.

Over the past two or three centuries, Western culture, the Occident, has, in general, formulated views and prejudices about Eastern culture, the Orient. Writer Edward Said has described this phenomenon as Orientalism and has written a book with the same name. Briefly, Orientalism would claim that one culture (the West) is superior to another (the East). This is useful to understand in our study and practice of Christian Science.

For instance, the belief that a group of people is deprived of God, is mental malpractice, wrong thinking. It suggests that some people aren’t worthy of God’s care. Perhaps this was Jonah’s view of Nineveh, as seen in his reluctance to speak to them about God. His subsequent experience taught him that God’s love is universal. And that is what our prayers can do for the current conflict: insist on God’s love for all.

So I knew I must “go to Nineveh”—I must know the Syrian people are worthy of God’s blessing, and that they can feel God’s love for all humanity. Eddy writes, “One infinite God, good, unifies men and nations; constitutes the brotherhood of man; ends wars; …” (Science and Health, p. 340). When, in prayer, we acknowledge the present perfection of God’s creation, the light of the Christ brings freedom to thought, and a greater sense of God’s government of universal, all-inclusive love. This can give hope and assurance to all involved in peacemaking efforts on all sides of the conflict, showing a way forward for peace.

After praying along these lines, I felt the weight of helplessness lifting from me. I felt the operation of the Holy Ghost, which Eddy describes as the “Science of God and man … which reveals and sustains the unbroken and eternal harmony of both God and the universe. It is the kingdom of heaven, the ever-present reign of harmony, already with us” (Unity of Good, p. 52).

My prayers helped me recognize the authority and power of the one omnipotent and supreme God, the operation of divine law in all ages, maintaining harmony and peace for all people.

I knew this prayer has a healing effect in human experience, that it helps correct and obliterate the false testimony that says man is held in bondage to violence and hate. Man is inherently good and peaceful. Hatred is a lie, as is repression, and through God-centered prayer these lies can and must be cast out, leaving humanity free to choose the path of peace and freedom.

Every inspired, spiritual idea necessary for peace, harmony, joy, and love is and can be felt by all humanity, including all Syrians. Our prayers can uphold and affirm these spiritual facts, dispelling the darkness of hatred and helplessness, and erasing prejudice, to bring healing to all people. 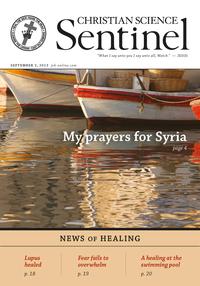