Friends have asked me on certain occasions if I am going to don a pink hat and march in protest, sign an online petition to combat climate change, or contribute money to help stop the cover-up of heinous crimes. We live in an age of activism, which is expressed in many ways, from “artivism” (activism through making art), to “hacktivism” (practiced by WikiLeaks), to “economic activism” (practiced by consumers boycotting corporations).

Many of us want to do something to promote positive change. Prayer is rarely seen as a viable first step in accomplishing this change. To many, it seems that it is not enough to pray. Indeed, the expression “Our thoughts and prayers are with you” is condemned as a meaningless condolence in the face of tragedy. This reflects the belief that prayer is powerless—just some comforting words—and that what we really need is human action.

Yet there is an activist in the Bible who demonstrates the power of prayer, and that is Christ Jesus. Let’s look at one of Jesus’ healings—the one where he feeds the five thousand with a few fish and loaves of bread, which is recorded in all four Gospels in the Bible. To me, this is a clear example of effective activism, or “doing something”: It was prayer that met the human need.

This was in contrast to how Jesus’ disciples approached doing something. They felt Jesus should take immediate action—send the people away to buy food before they went hungry. To most of us, this would be perfectly justifiable. But the disciples’ point of view was based on their belief in lack: that there was not enough food for so many people. And their “solution” sprang from this belief. They thought the answer to a lack of material resources was to find more material resources.

Doesn’t this describe the common sense of activism­—doing something through human energy and resources? It’s seeking a material solution to a perceived material lack (such as a lack of food, money, equality, or justice). But a material solution can go only so far because it is, by definition, limited. Matter is finite. God is infinite, and therefore, unlimited. Jesus taught in the Lord’s Prayer, “Thy will be done in earth, as it is in heaven. Give us this day our daily bread” (Matthew 6:10, 11). This prayer assures us that by relying on God we can experience the fullness of heaven—God’s infinite spiritual abundance—right here on earth.

There is an activist in the Bible who demonstrates the power of prayer, and that is Christ Jesus.

When Jesus fed the multitudes, first he told the disciples to bring the loaves and fishes to him. Then he looked up to heaven and blessed the loaves and fishes (see Matthew 14:19). It seems he was acknowledging God’s power and presence and seeing something beyond the apparent limited material resources in front of him. In Science and Health with Key to the Scriptures by Mary Baker Eddy we read, “Metaphysics resolves things into thoughts, and exchanges the objects of sense for the ideas of Soul” (p. 269). Could it be that the loaves and fishes represented “ideas of Soul” to Jesus? That he saw the productivity and spiritual sustenance of divine Love? Instead of seeing a limited supply of matter, he recognized the tangible and abundant evidence of Soul, of God, as being present right there.

Only after he acknowledged God’s presence and the infinite goodness of God’s creation did Jesus actually do something comprehensible to the material senses as “activity” by physically breaking the loaves and giving them to his disciples to distribute to the multitudes. Jesus showed the disciples that they had the inherent ability to give, share, and impart spiritual understanding—the understanding that is revealed right in the first chapter of Genesis, which states that man is created in God’s image and likeness, that man has dominion, and that his purpose is to be fruitful and multiply.

More than five thousand hungry mouths were fully satisfied by their meal. And there were ample leftovers, which tells us that this was a generous and bountiful meal. We don’t read that the disciples were wearied by the activity of distributing food to over five thousand people. They too were sustained. This shows what can happen when we acknowledge God’s power and presence first, and let that understanding of God lead us to right activity.

Jesus showed us an inspired, spiritual model for activism—a divine means of overcoming lack in our lives and in the world. He demonstrated that God’s loving provision is available to each of us as His creation. Jesus knew this truth in prayer first. Then he proved this in purposeful activity.

The teachings of Christian Science can make those who understand and practice it into spiritual activists, and the organization of the Church of Christ, Scientist, demonstrates, in a modest sense, the same kind of purposeful, spiritual activity and power Christ Jesus demonstrated. In many communities throughout the world, branch Churches of Christ, Scientist, are bringing spiritual nourishment and restoration to their communities through the activities of church services, Sunday Schools, Christian Science Reading Rooms, and public lectures—and through the individual and collective prayers of local church members and their God-impelled actions.

Another significant activity of this Church is the daily newspaper, The Christian Science Monitor, which is intended, Mrs. Eddy wrote, “to spread undivided the Science that operates unspent” (The First Church of Christ, Scientist, and Miscellany, p. 353). This mirrors in an important way what the disciples were doing as they distributed the loaves and fishes.

The blessings come through these activities when the Christ, the power of divine Truth, dissolves (through prayer) the belief of limitation—the belief that solutions can be found only in matter. Let us follow Christ’s model as spiritual activists—beginning, like Jesus, with God. Because God is infinite good, we can experience the tangible effects of His love right here and now. 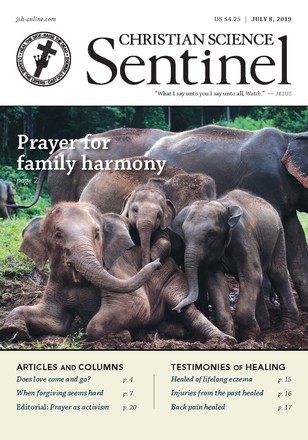 Does love come and go?

Our protection during a protest

A simple prayer and a family blessing

Doing my chores … with God!

Injuries from the past healed

All that I am