If we are caught up in the news these days and feeling despondent about what lies ahead for our country, or the world, or even for ourselves, we might consider what Moses said to a certain young man: “Would God that all the Lord’s people were prophets, and that the Lord would put his spirit upon them!” (Numbers 11:29).

It’s a good way to approach the news—as a prophet. The Discoverer of Christian Science and founder of The Christian Science Monitor, Mary Baker Eddy, defined prophet as “a spiritual seer; disappearance of material sense before the conscious facts of spiritual Truth” (Science and Health with Key to the Scriptures, p. 593). As spiritual seers, we can look beyond every untoward event or disappointing newsmaker to see the truth of what God is doing right now, right here. That’s the real news of what is happening. And it’s always good.

We can look beyond every untoward event to see the truth of what God is doing.

But Ezekiel didn’t leave his insight there. He insisted on replacing the material picture of bad leadership with an image of God’s everlastingly tender and righteous government: “Therefore, ye shepherds, hear the word of the Lord,” he wrote. “For thus saith the Lord God; Behold, I, even I, will both search my sheep, and seek them out.… Therefore will I save my flock, and they shall no more be a prey” (Ezekiel 34:4, 7, 11, 22).

Ezekiel saw that the leaders’ day of misrule would eventually end and that God’s love for His creation would come to light. What a comfort and glorious power that is, to be able to uncover wrong and witness the promise of God’s love right where evil seems to be! As Mrs. Eddy observed, “You uncover sin, not in order to injure, but in order to bless the corporeal man; and a right motive has its reward” (Science and Health, p. 453).

That’s an important function of journalism in the world, so important that Mrs. Eddy founded the Monitor both to set an example of news reporting that promotes healing and to help open the thought of those consuming the news to seeing evidence of God’s eternal care right now. In fact, all of the Christian Science periodicals help us take a deeper, more spiritual look at things, by uncovering sin and inspiring readers to bear witness to the spiritual facts of being—that God’s love is ever present, and our place in His love is forever assured.

So it’s not just professional journalists who have a key role when it comes to news. As readers, we ourselves can take a “prophetic,” or spiritually inspired, approach in receiving and responding to news, even in our personal lives. Such an approach opens thought to God’s love in ways that heal. It demonstrates, step by step, God’s goodness as a power that is always here for humanity’s comfort and care. And, if confronted with the carnal mind’s aggressive claim that evil is superior to God, we can take this advice from another of Mrs. Eddy’s works: “When God bids one uncover iniquity, in order to exterminate it, one should lay it bare; and divine Love will bless this endeavor and those whom it reaches” (Miscellaneous Writings 1883–1896, p. 348). Such an approach to any kind of news can be profoundly prophetic, helping to make the reality of God’s government more evident here on earth.

I had an experience illustrating this when my young daughter came down with a fever. Instead of automatically believing the evidence before me, suggesting that she could be harmed, I affirmed that her real, spiritual identity was something else entirely—that she was the perfect image of God, right then, and that the material “news” was simply not representative of who she truly was. Further, I knew that through my prayer, based on this spiritual reality, she could be healed.

This wasn’t a question of burying my head in the sand, or not tending to my daughter’s needs. Instead, as I cared for her, I was taking a deeper look at the spiritual reality. I refused to doubt the truth about what we are as God’s creation, even when the material picture suggested that sickness was a firm reality. By that very afternoon, my daughter was completely well and ready to resume her day.

It’s not just journalists who have a key role when it comes to news.

Taking a prophetic approach to the news—whatever it may be—is playing an active role in bringing the Christ into human affairs. The Word of God was made manifest in Christ Jesus to save humanity from sin and all the claims of mortality. Although Jesus’ time on earth was relatively brief, the Christ, his divine nature, has always been here and always will be. Expressing Christ in the way we live and interact with the world, we may be led to support particular political candidates or have strong views about certain issues of the day, but we will also recognize our real job as bringing not heat but light—the light of Christ—to humanity, loving as God loves and bearing witness to His spiritual truth: that despite what the material senses may present, all creation is spiritual, perfect, harmonious, eternal.

This is possible now for all of us. The injustice perpetrated on humanity by the false belief that inharmony has staying power is too aggressive to be allowed to smolder. The Word of God is here to uncover the falsity of the carnal mind and to save us all. And you and I are essential in manifesting the Word right now, in our personal lives and in our engagement with the world around us. 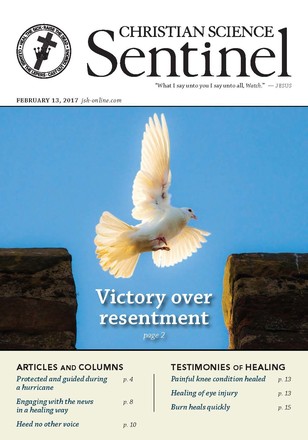 Protected and guided during a hurricane

Your healing practice can come to perfect bloom!

Engaging with the news in a healing way

Heed no other voice

I didn’t have to wait for healing

Cut thumb healed with no scar

A counter-narrative for Boko Haram’s victims

By The Monitor’s Editorial Board | February 2017