Forgiving after we have been deeply wronged can be difficult. Who hasn’t struggled at times to let go of hurt, resentment, anger, and a desire to retaliate?

However, Christ Jesus taught that it is imperative to forgive. Think of the ultimate example he gave us on the cross when he said of his persecutors, “Father, forgive them; for they know not what they do” (Luke 23:34).

The pure, selfless love expressed in this prayer was essential to Jesus’ overcoming of death. He understood that the hatred of his persecutors had no real power to separate him from God, omnipotent Life, and this consciousness of divine Love’s supremacy enabled him to triumph over the grave.

Forgiving requires seeing beyond what material appearance is presenting about man. Right where an erring, human personality seems to be, consciousness that is in tune with God perceives the real, spiritual man, the true likeness of God. And this Christly view brings healing into our experience.

Mary Baker Eddy, the Discoverer of Christian Science, says in Science and Health with Key to the Scriptures: “Jesus beheld in Science the perfect man, who appeared to him where sinning mortal man appears to mortals. In this perfect man the Saviour saw God’s own likeness, and this correct view of man healed the sick” (pp. 476–477).

The value of forgiveness to our Christian practice is indicated by its prominence in Jesus’ teachings, including the Lord’s Prayer. Jesus taught us to pray, “Forgive us our debts, as we forgive our debtors” (Matthew 6:12). Science and Health states that the Lord’s Prayer “covers all human needs” and indicates “the heaven-born aspiration and spiritual consciousness … which instantaneously heals the sick” (p. 16), telling us that forgiveness is of paramount importance in our journey to understand and feel God’s presence in our lives.

Forgiving requires seeing beyond what material appearance is presenting about man.

Our “debtors” obviously include those who have wronged us in some way. But that term could also apply more broadly to anyone in whom divine attributes seem to be absent or obscured. Anyone who represents a picture of lack—lack of kindness, of understanding, of health, of supply—suggests that the wholeness of God’s creation has been compromised.

Forgiveness starts with the willingness to look past material presentations of our fellow man and affirm instead the truth of man’s nature as the pure, perfect, and beloved spiritual expression of God. No matter how real the false view of man appears, or how it might seem to be affecting us, a deeper understanding of God, divine Love, enables us to reject any appearance of hatred or the claim that divine Love is absent.

I learned about forgiveness a number of years ago when my husband and I were struggling to get along with our neighbors. Our bedroom was within a few feet of the wall that separated our properties. Shortly after they moved in, they started having loud parties in their backyard, which was next to our bedroom windows. When we spoke to them about the problem, asking them to take the group inside after a certain hour, they were not very receptive. After several instances, we had to call the police to come and ask them to quiet down. Relations became hostile.

As I prayed about the situation, I yearned to see these neighbors as completely in God’s care. I prayed to know them as God’s children, as harmonious, cooperative expressions of the divine Mind. I asked God to show me how He was seeing His children.

What occurred to me next was a surprise. I had been thinking about what the neighbors needed to do to restore harmony to the situation. But what about me? What could I do to make the circumstances better? I realized that our bed was situated right next to the windows. It could be moved to minimize exposure to outside noise. We also quickly realized that replacing the old windows would help reduce noise from outside.

Soon afterward, the neighbors came over with some suggestions for how to install sound buffers on the wall between our homes. Interestingly, they also stopped having night gatherings in the backyard that disturbed our sleep. After that, our relations with them were cordial.

More recently, I needed to forgive when my boss’s attitude toward me became hostile. I had disagreed with some management decisions and felt it was appropriate to make my position known, since those decisions directly affected me. After that, I was criticized in front of others, given low-level job assignments, and cut out of decision-making and meetings. I tried looking for another position, but my efforts were unfruitful. My work began to suffer.

Praying earnestly to understand that both my boss and I were under God’s harmonious government, I did my best to put the situation in God’s hands and not let anger rule my thought. I also made a point of recognizing as much as possible the good going on around me. I became aware of many things on the job to be grateful for that I had not thought of previously. This helped me endure the increasing hostilities between my boss and me.

I began to understand better that God’s man can never be either hater or hated.

As I continued praying, I began to understand better that God’s man can never be either hater or hated. Hatred of any kind is sensual and animalistic, not the reality of spiritual being in divine Science. This insight enabled me to look beyond my boss’s behavior and hold in thought the truth of God’s creation. I was able to stay calm and not react during several instances when she screamed at me.

As I continued to turn to God for refuge, the thought came to me that a predator/prey relationship doesn’t exist in the kingdom of heaven. No one was actually able to hurt me, because God is my source and protector. The fear left. I was able to think of my boss as innocent.

Soon after that, the thought came to me that I had worked there for many years and was near what is considered retirement age. Although it hadn’t occurred to me before, I investigated the requirements for retiring and found I could leave the organization within a few months. My husband felt our financial situation allowed for the transition. After I gave my notice, the boss’s attacks substantially decreased.

When it came time for me to leave, both of us were able to express genuine affection. She wrote me a nice card, gave me a lovely going-away party, and provided me with a glowing reference letter. I thought of all the times we had shared laughter, and I was able to genuinely thank her. It was a harmonious parting. Since then I have found employment in a variety of creative ways, using abilities I enjoy.

The hope of healing is often what draws us to Christianity, but feeling more of God’s love in our lives is what keeps us there, even in the face of difficulties. Practicing forgiveness is key to embodying divine Love and experiencing its healing effects in our lives.

Send a comment to the editors
NEXT IN THIS ISSUE
Article
‘Hello, brother’ 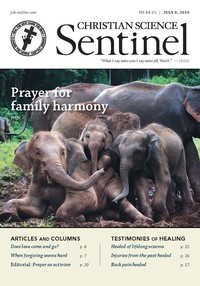