Men frequently speak of disastrous hurricanes or floods as acts of God. But can we picture the Mind we know as God torn by tempestuous thoughts or violent emotions? Do we believe that God has any part in destruction by whatever path it may seem to come? What kind of God would harass His universe with destructive forces which men know as adverse weather conditions? Certainly not God, who, the Bible tells us, is good and who is Love. There is not an element of injury in Love. It could not harm.

A dictionary defines "weather" as "state of the air or atmosphere with respect to heat or cold, wetness or dryness, calm or storm." And it defines atmosphere as "a surrounding or pervading influence." Then we may well ask ourselves: "What, as a beloved child of God, is my environment? Does God surround me with turbulent experiences? Does He encompass me without warning in dangerous floods?" How could He? It is not in His nature to be familiar with destruction.

Stormy weather prophecies need to be replaced with forecasts of good, issuing from the one peaceful Mind, which is God. We should daily enter our protests against the assumed dominion of destructive forces. Man, the child of God, is environed by the beneficent atmosphere of the divine Mind. He lives in the kingdom of heaven, which is never disturbed by discordant influences. God's children have always lived with Him in this celestial land and always will. It is their native country.

Only so-called mortal mind entertains thoughts of gloom, disaster, excesses, and deficiencies. It has no peace to inject into so-called mortal experience. It has no gentleness. It has no sunny warmth. Such qualities belong to God, and He has never shared them with an illusive evil force. There is nothing in mortal mind with which to achieve a condition of normalcy and so to come into a haven of peace. Where in mortal thought can you find surcease from storms? Even the terms used in describing abnormal weather are indicative of mortal mind thinking: bad weather, a violent storm, destructive floods, prostrating heat waves.

Let us turn, then, to the land of right thinking, where Truth understood controls the conditions of mankind's environment. It is from God's hand that we receive the gentle rain of heavenly benefits. It is from His hand that we receive the warmth and light necessary for the unfolding of the Christ-idea. It is from His law and order that stability and normalcy proceed. Mary Baker Eddy tells us in "Science and Health with Key to the Scriptures" (p. 171), "Mind's control over the universe, including man, is no longer an open question, but is demonstrable Science."

With the advent of the Christ, Truth, in our consciousness, we are offered freedom from the cruel tyranny of abnormal weather conditions. Gradually the spiritual counterfact of material weather laws is being demonstrated. Mrs. Eddy issues the call to achieve freedom from this, as well as from all other forms of mortal belief, when she states in Science and Health (p. 227): "Citizens of the world, accept the 'glorious liberty of the children of God,' and be free! This is your divine right." 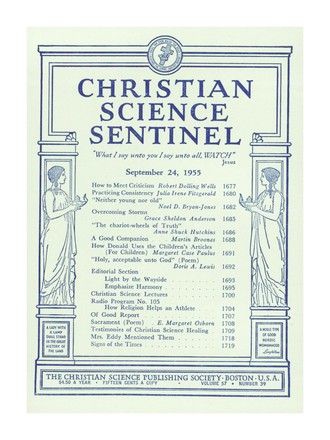 HOW TO MEET CRITICISM

"NEITHER YOUNG NOR OLD"

"THE CHARIOT-WHEELS OF TRUTH"

HOW DONALD USES THE CHILDREN'S ARTICLES

LIGHT BY THE WAYSIDE

Our Leader's Counsel Regarding Church Membership

RADIO PROGRAM No. 105 - How Religion Helps an Athlete

with contributions from Al Sebald | September 1955

I am profoundly grateful for a...

Before I became a student of...

Christian Science found me a...