Is kindness an evasive response to animosity? Is love a weak reply to hatred? Are self-abnegation and courage fruitless when one is under threat?

It’s pretty safe to say that Christ Jesus didn’t think so. He taught that kindness, love, setting aside one’s own interests in the interest of others, and courage are powerful and natural ways for us to respond to evil.

He said: “Ye have heard that it hath been said, Thou shalt love thy neighbour, and hate thine enemy. But I say unto you, Love your enemies, bless them that curse you, do good to them that hate you, and pray for them which despitefully use you, and persecute you; that ye may be the children of your Father which is in heaven: for he maketh his sun to rise on the evil and on the good, and sendeth rain on the just and on the unjust” (Matthew 5:43–45).

This time I wanted to go beyond mere human “do-gooding.”

What I get from Jesus’ analogy of the sunlight and rain is that, like a beam of light is capable of lighting any degree of darkness, and like the raindrops can cleanse, saturate, and nourish any type of plant, every single expression of God’s love, reflected in our thoughts and actions, can meet the human need, including the need to defend against and disarm evil. It can do this through our heartfelt blessings and prayers, and in doing good to others.

God, who is divine Love, provides each one of His children with His own love to experience and express. As the reflection or image of God, each of us has a limitless spring of kindness, courage, selflessness, and love to draw on. God’s love expressed in us, in big and small ways, can turn an enemy away from evil, guiding the individual in some degree to express his or her true spiritual selfhood. God’s love expressed through us can even disarm and render an enemy incapable of doing harm.

I once discovered a plot that hadn’t been set in motion yet—a plot to bring harm and upset to our very loving and happy family. Initially I was caught off guard. No one had recognized that hatred had been slowly, silently building up behind the scenes in the thought of a distant relative over many decades. Not knowing the backstory, I unwittingly invited this woman to stay with us during her time of need. Consequently, being the hostess and the one who was at home most of the time, I discovered the plot and became the main target of animosity.

A typical response might have been to ask her to leave. I certainly contemplated it! But in consideration of the family, I decided not to do this. I sensed that, in this case, sending her away would not eliminate the hatred or the danger. So I decided to take the opportunity, while she was under my roof, to pray for resolution. It required both courage and self-abnegation to put my family’s needs before my own, but each morning for three days I turned to God for guidance in how to proceed and for the wisdom and courage to follow through. In doing so, I knew God would meet my need for safety and peace, too.

The first morning, my answer to prayer, “Be kind,” seemed simplistic. But it was all I could hear when I prayed. “Be kind; just be kind.” So I trusted the answer to my prayer and thought of all the kindnesses I could express. I prepared her tea and sat with her while she drank it, even while she said the most awful things to me. I took great care in making up her room nicely, providing fresh linens and towels. I was as nice as I knew to be, remaining nonreactive to the stinging verbal arrows she launched at me throughout the day. Day two, I prayed again. And I got the same message. But this time I wanted to go beyond mere human “do-gooding.”

My heart was craving the power of kindness as a spiritual attribute that comes from God. So I looked a bit deeper into what kindness involves. I found this in Mary Baker Eddy’s Science and Health with Key to the Scriptures: “Christian Science commands man to master the propensities,—to hold hatred in abeyance with kindness, to conquer lust with chastity, revenge with charity, and to overcome deceit with honesty. Choke these errors in their early stages, if you would not cherish an army of conspirators against health, happiness, and success” (p. 405).

This helped me see that kindness was more than a stall-tactic to delay evil or a tool for the timid. When it is understood that kindness comes from God, Love, it becomes an expression of spiritual and loving power that suspends and renders evil inactive.

Armed with this perspective, I approached the second day with joy and determination. Even though this woman’s conversation didn’t improve, perhaps it even worsened, I felt that my expression of patience and good, through kind thoughts and acts, was Love-enforced and therefore was choking out evil’s capacity to hit its mark. As I grew stronger and more confident in my reflection of divine Love through self-abnegation and kindness, I became more convinced that evil could be completely disarmed through the Christ, God’s message of love for each one of us.

When I awakened on day three, the message I received in prayer was different. “Love her.” Whoa. I felt unprepared for that. Love her? I didn’t even like her! At least I didn’t like what I had seen in her—the hateful resentment, the determination to do harm, the justification of her position, and the personal attacks on me as an innocent person trying my best to be kind.

The Bible tells a story of David before he became a king. The present king, Saul, discovered David’s whereabouts in a desert wilderness and began to hunt him with murderous intent. David found Saul’s camp, and he could have easily taken out Saul and his guards at night while they slept. But instead, David said he could not do harm to “the Lord’s anointed.” So rather than killing Saul to save himself, he disarmed him, taking away his weapon and his water, and leaving Saul with neither the means to harm David nor the water that would allow Saul to continue his pursuit.

I spent the day feeling divine Love, like illuminating light and nourishing rain, pouring forth.

Upon awaking, Saul recognized that David had been kind to him by disarming without harming him when he was most vulnerable and exposed. In the end, Saul admitted his error in hunting David, and blessed him (see I Samuel 26). Interestingly, David recognized that Saul had more to learn, and that he would come after him to attempt to kill him on another day (see I Samuel 27:1). But Saul’s behavior didn’t determine David’s actions. David’s agenda was set by God. And David never failed to recognize Saul as “the Lord’s anointed” even while Saul behaved abominably. Through all future encounters with this enemy, David remained protected (see I and II Samuel).

We could say that a spiritual sense of Saul as “God’s anointed” helped David keep his cool and disarm his enemy. Well, my spiritual sense of our houseguest helped me love her on that third day. My prayer revealed to me the Christ message that as God’s child she was a reflection of divine Love, and therefore lovable, no matter what she believed or expressed about our family. I spent the day feeling divine Love, like illuminating light and nourishing rain, pouring forth with no judgment on all of Love’s creation.

The fourth morning, I awakened and leaped out of bed to greet our guest and to prepare her breakfast. I was truly looking forward to seeing her, so strengthened was I by all this kindness and love. On the kitchen counter I found a short note which concluded, “Thank you for your kindness.” She had packed in the night and left before we awakened. She never did act on her destructive plan. In fact, we never saw her again. We heard news of her from time to time for about a year, but never negative. And then after a year or so, we never heard of her again.

Perhaps not every enemy will become a friend. But the enemy doesn’t have to set the agenda. Christ Jesus taught that we can choose to love by letting divine Love, through Christ, reveal the human footsteps for disarming an enemy. Courage, strength, selflessness, love, and spiritual understanding are each a powerful Christian response to any enemy. They open the way and do the work. 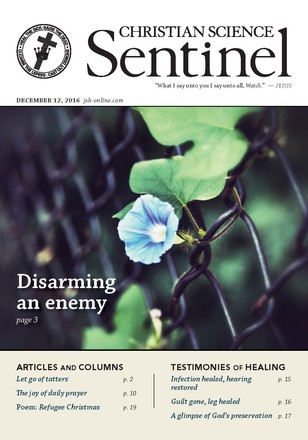 The joy of daily prayer

What is Christmas all about?

A glimpse of God’s preservation