INJURED AND SEPARATED FROM GOD? OUT OF THE QUESTION!

One morning, as I was rushing to get to school, I accidentally tripped and fell down several stairs, landing on my left ankle. It was very painful, and I couldn't put any weight on it. The fears of being injured and of missing school were both very strong, since it was right before exams and I had a lot going on.

My mom immediately came to my side. I was crying and was having a hard time calming down. I didn't want anyone to get near my ankle. But soon, I was able to slide my shoe off.

My mom comforted me by sharing something she'd saved from a Christian Science magazine about calming fear (she had found the ideas so helpful that she'd written them in the front of her Science and Health). As we talked, I realized another reason I was so fearful was that I'd injured the same ankle months before. It had eventually healed, but had taken a while. I felt that maybe praying about this injury would take so much work and effort that I would be unable to handle it in time to go to school the next day.

My parents decided it was best for me to spend some time at home, and see if it was wise for me to go in to school later. I called a Christian Science practitioner to help me break out of the spiral of fear and my feelings of powerlessness. The practitioner helped me realize that healing did not have to be a struggle or have an amount of time associated with it. I could expect quick results. So I turned to one of my favorite sources of inspiration, the Daily Prayer, which is in the Manual of The Mother Church on page 41. I decided to think about that prayer, line by line.

I let the dominion I had from God soak into my thoughts like rain.

In writing courses, I'd learned that the first line of any essay or paper needs to catch the reader's attention. And this one caught mine. Since this line is really a quote from the Lord's Prayer in the Bible (see Matt. 6:10). I looked at the spiritual interpretation of that prayer, which Mary Baker Eddy gives in Science and Health (p. 16): "Thy kingdom come. Thy kingdom is come; Thou art ever-present." To me this meant that no matter where I went, God was always there caring for me, and making sure I was safe. Because of this, there was no opportunity for me to fall or in any way be injured, yesterday, today, or in the future.

"LET THE REIGN OF DIVINE TRUTH, LIFE, AND LOVE BE ESTABLISHED IN ME"

When I was a little kid, I'd thought that the "reign" used in this prayer meant "rain" from the sky. But now I understood it to mean "to govern or rule." It was helpful, though, to combine these two ideas, and I decided to let the dominion I had from God (from divine Truth, Life, and Love) soak into my thoughts like rain. I could absorb the truth and not allow any fear or false ideas about my health to attack me, since I was ruled by God.

"AND RULE OUT OF ME ALL SIN"

Knowing the original meaning of the word sin as "missing the mark," helped here. This definition expanded the idea of sin from just behaving in the wrong way. I could let the truth that I understood from the previous line help rid me of all thoughts that missed the target and gave power to anything besides God.

"AND MAY THY WORD ENRICH THE AFFECTIONS OF ALL MANKIND, AND GOVERN THEM"

This, to me, seemed like a nice summary of the previous lines. I knew that I could allow God to govern all aspects of who I was. In this way, I would be able to love God more, and see how He was caring for me.

When I felt better, and calm, I called the practitioner back. She shared a passage from Science and Health that says: "There is but one primal cause. Therefore there can be no effect from any other cause, and there can be no reality in aught which does not proceed from this great and only cause" (p. 207). This really helped me because if there is only one cause, then the only effect we can receive from God is goodness.

This quote helped me so much that I began to read the surrounding pages, dissecting each sentence, trying to understand more completely what Mary Baker Eddy was saying. I was not really in pain anymore, but I was worried that my ankle might begin to hurt later on, so I continued to pray.

My dad and I talked about my healthcare options. We decided that I would go to a doctor and get my ankle checked out. After taking a look at my ankle, the doctor told me that it looked like a bad sprain, but that I could get it X-rayed if I would like. Although I decided that this was unnecessary, I thanked her and felt that I wanted to continue to pray until there was no fear or worry left. Later on, I was feeling much better and was even able to walk around. I told my dad I wanted to go back to school.

On the ride to my afternoon classes later that day, I continued to pray with the idea that I was not trying to "change" something to do with my body, and that my only job was to allow the Christ, God's message of love, to flood my thoughts with the truth about my perfection. At this point. I was comfortable but felt that I didn't want to run or do anything more than walk.

The very next day, I was able to continue my normal activities, including walking to and from school. I kept praying, and every time I was worried about something involving my ankle, I went right back to the ideas that had helped me. Soon, I was able to run again.

Several months later, I was running when I tripped and fell on the same ankle, and it hurt. But I prayed to see that it was impossible for me to have ever been injured or separated from God, divine Love. I got up, continued to run, and all the pain just evaporated. I was thankful for this and realized the importance of being ready to confront any obstacle to my harmony and wholeness, at any time.

This healing was also very meaningful to me because it allowed me to see how natural a Christian Science healing can be. I'm grateful to have used spiritual tools to conquer fear. |CSS

Emily Hunt is in 12th grade and loves being in Girl Scouts and doing historical reenacting. 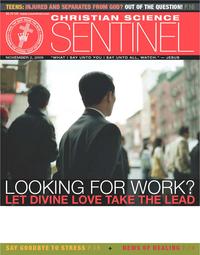