The safety of home

"In God have I put my trust: I will not be afraid what man can do unto me" (Ps. 56:11). I love this ancient prayer, and I would like to explain how it has helped my family and me, and informs my prayer for the world today.

A few years ago we were living in the outskirts of a beautiful town in a safe neighborhood—that is, until one day a chain of burglaries started. Our home didn't have any security devices, and there were four of us, two adults and two toddlers. House after house was hit, and at one point we felt that we were going to be the next victims.

Each night we woke up feeling watched, and for a while my husband and I were petrified. So we opted for action. Every night, when we woke up, we faced down our fears through prayer, until we felt secure. We prayed with some ideas that Mary Baker Eddy offered about the Biblical heavenly city, Jerusalem.

Jerusalem can be thought of spiritually as the ultimate home of us all, a symbol for our divine habitation. Science and Health says this about Jerusalem: "The four sides of our city are the Word, Christ, Christianity, and divine Science; 'and the gates of it shall not be shut at all by day: for there shall be no night there.' This city is wholly spiritual, as its four sides indicate" (p. 575). As my husband and I thought about this passage, for us it came to mean that we lived in divine Love's presence. We considered each side of our city. I asked myself: What does it mean that one side of my home is the Word of God? That another side is the Christ? We began to see that these walls are impregnable. And they surround everyone.

We asked God for forgiveness for believing for a while that any of His children could be a threat to the safety of others. We felt forgiven, and continued to enlarge the concept of our home with regular prayer. Each night our mental home became larger and stronger to us. It embraced our neighborhood, our city, our country, the whole world.

We continued to pray about our fears until we felt completely at ease and knew without a doubt that God was the supreme power of the universe—not too large to overlook us, not so small as to be of no help. After praying in this way for about two weeks, we no longer woke up in the middle of the night. Prayer had become to us a powerful means of transforming fears into unselfish care for our neighbors. The way from insecurity to safety had been as close as our own thoughts. And the burglaries stopped.

Today, I pray to see that all people and nations live in this same heavenly city, the new Jerusalem. I yearn to enlarge my concept of sacred safety to include everyone, in all of the world's cities. I love this comforting promise, as belonging to every child, mother, and father: "You are not alone. Love is with you watching tenderly over you by day and night" (Mary Baker Eddy, quoted in Inspiration for Life's Relationships, p. 13).

May the safety of our shared heavenly home embrace the whole world, calming hot tempers and heated fears with the cool balm of spiritual inspiration. God's promise is freedom for all of His children. 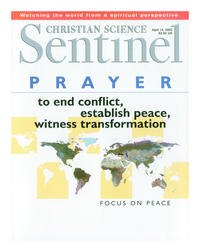