I received one early proof of God’s love for His children when I was in tenth grade. I was a member of my high school’s madrigal singers choir, and we received an invitation for two of our singers to audition for a large, semiprofessional performance group. Three of us raised our hands: a senior, a junior, and a sophomore—me. Our teacher said that the two oldest students could audition and that only if the director had time to take a third, could I audition.

On the morning of the audition, I woke up with no voice. Nothing would come out but air. I had been raised in Christian Science, and my mom calmly reminded me of what I had learned in Sunday School: that God was always tenderly watching over me, and that my real voice was a gift from God that could never be lost because I “live, and move, and have [my] being” (Acts 17:28) in God, Spirit.

She reminded me that God’s ideas—His children—are forever in their right place and that nothing could keep me from being in my right place. To reinforce this truth in thought, we prayed the Lord’s Prayer along with its spiritual interpretation as given in the Christian Science textbook, Science and Health with Key to the Scriptures by Mary Baker Eddy (see p. 16).

My mother also encouraged me to know that God loves all His children, including the other singers. Rather than outlining who should “win” the audition, I should trust God to keep each of us in our right place.

On the long drive to the audition venue, I agreed not to keep checking my voice in warm-ups to see if it was improving, but instead to be quiet and know that as God’s idea, I was already perfect.

When I checked in to sign up for the audition, I was told there was enough time for me to try out. When it was my turn and I started to sing, my voice was as clear as a bell. It felt as if God was governing the whole situation.

Not long after, the director told me I had been selected to join the group! He then asked how I had heard of the auditions, because invitations had been sent only to nearby schools. The one we received must have been missent. This was further proof to me that God is always guiding His children, including me, to their rightful place, and that nothing—not sickness, or long distance, or a mistake—has the power to separate us from where we need to be.

I went on to have a career in music, with many auditions over the years. I never prayed for a specific outcome, trusting that my Father-Mother God loves and provides for all His children.

I wish to express my deepest gratitude to God for all His blessings, and especially for Christian Science. 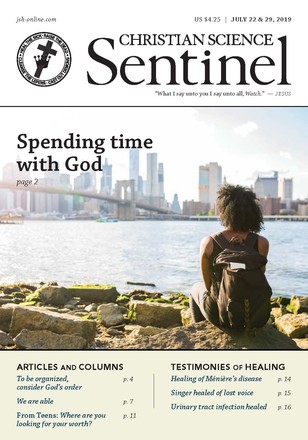 To be organized, consider God’s order

The coach you can depend on

Where are you looking for your worth?

Overnight healing of an injured shoulder