One Saturday morning not too long after I’d been a guest at an inspiring Christian Science association meeting on the topic of unselfishness, I woke up with the idea to volunteer at my local Christian Science Reading Room. I wasn’t scheduled to work there on that day, but called up the person who was and offered to take over her shift. Since she’d already worked some that week, she was delighted.

I had a productive time at the Reading Room, and afterward I stopped at a grocery store. In front of the store, there was a young couple with cardboard signs asking for money. Admittedly, I felt a bit annoyed. Without really looking at the couple, I went into the store and chatted with one of the store clerks about seeing more and more people asking for money right near the doorways of stores. What she said was in line with the desire I’d had that morning to practice unselfishness. She told me I shouldn’t feel obligated to give them money, but maybe I should just acknowledge them. I knew that was a good idea and one I normally try to practice.

I like this quote from the New Living Translation of the Bible: “If your gift is to encourage others, be encouraging. If it is giving, give generously. If God has given you leadership ability, take the responsibility seriously. And if you have a gift for showing kindness to others, do it gladly” (Romans 12:8).

I felt compassion instead of annoyance.

So in that spirit, on my way out of the store I looked at the woman with the cardboard sign and began to talk to her, asking about her situation. She was lovely. I felt compassion now instead of annoyance. After some conversation, I asked her if she would be interested in a book about spiritual healing, and she immediately said yes. She had never heard of Christian Science or Mary Baker Eddy.

I always have copies of the Christian Science textbook, Science and Health with Key to the Scriptures by Mary Baker Eddy, in my car, so I had one ready. I showed her the textbook and read a few of my favorite passages to her, which she really appreciated. I also gave her three copies of the Sentinel. I told her that each issue of the Sentinel has testimonies of healing in it, and that reading these testimonies was how I fell in love with Christian Science. I also told her a little about Eddy, about her healing works, and that she founded a church. We talked for about 15 minutes.

I was so grateful for this opportunity to practice unselfishness. I feel that it blessed me as much as it blessed my new friend.

I have been thinking about dedication recently, and two incidents in my own experience came to mind.I was invited to play golf at a members-only golf club with a doctor, a lawyer, and a promin...

ENABLE ME TO GIVE

O Thou, the Giver of all good, Enable me to give the gem Of kindness to my neighborhood, As did Thy Son of Bethlehem; So that Thy gifts are understoodThrough me, Thy child, in sharing them. Then w...

Sharing: not dividing good but discovering it

Nothing can transform lives like the power of divine Love— expressed and received. 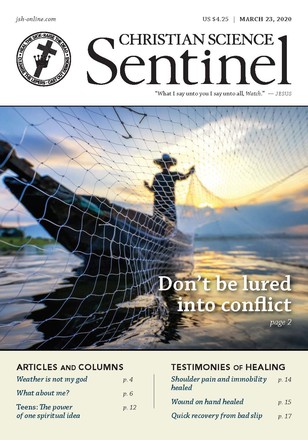 Weather is not my god

Wake up from the dream

Finding confidence in our abilities

The power of one spiritual idea