At a math conference I attended as a graduate student, we were divided into teams to decipher an encrypted message. I was perhaps the youngest participant, one of the few women, and was eager to prove myself. And, of course, I wanted my team to be the first to finish.

As the other members of my group offered their opinions and strategies, I found myself making snap judgments about who was worth listening to.

Hours into the project, my team had made some progress but then hit a stumbling block. One participant repeatedly suggested an insight and a possible way forward, but I had already decided she didn’t really know what she was doing. At my urging, we went in a different direction.

I was disappointed and rather ashamed of my behavior. My lack of respect for this colleague probably cost us the victory. My teammate was remarkably gracious to me, though—no sense of “I told you so.” She simply seemed genuinely pleased that the right idea had come to her.

She certainly earned my respect, as a mathematician and as a person. And I felt humbled. This was a lesson I never forgot.

Since then, I have found a better, more accurate starting place when interacting with others. It’s based on a message I’ve found in both the Old and New Testaments of the Bible. The first chapter of Genesis says that man is made in the likeness of God, and that God saw everything He had made as “very good” (1:31).

Because man is made in the likeness of God, each one
of us is inherently worthy of respect.

Christian Science teaches that God is all good and only good. Rather than being a superhuman figure who makes arbitrary decisions about our lives, God is impartial divine Love. Because man is made in the likeness of God, each one of us is inherently worthy of respect, having the ability to express Godlike qualities such as wisdom, love, beauty, intelligence, and so forth.

Many passages in the Bible teach us that superficial differences such as nationality, appearance, education, or income level aren’t what should prompt respect. One of my favorites is a statement by the Apostle Peter: “Of a truth I perceive that God is no respecter of persons: but in every nation he that feareth him, and worketh righteousness, is accepted with him” (Acts 10:34, 35).

Starting from this basis of expecting Godlike qualities and unlimited potential in all our neighbors and colleagues—regardless of their race, cultural background, social position, or political leanings—makes all the difference! When I have been humble enough to discern and respect another’s God-given intelligence, or courage, or anything else I might have thought was lacking, remarkable things have happened. Over the years I have been taught, mentored, encouraged, or otherwise blessed by what initially may have seemed to me to be unlikely people.

In fact, one definition of respect might be a willingness to see past the surface to the Godlikeness in someone—the innate good already there. We begin to discover that there’s more going on in thought and heart than meets the eye.

But can we always do this? What about when we’re confronted, sometimes repeatedly, with another’s attitude or actions that seem wrong or even hurtful? I’ve found two steps helpful here.

The first is to uplift my thinking about the other person. Now, this doesn’t mean being naive. Respect for others and their potential doesn’t mean going along with every idea someone presents. But we don’t make ourselves vulnerable to harm or loss when we make the effort to find another’s inherent Godlikeness.

And it’s not as though a lack of respect offers protection or progress. Actually, it’s thoughtful respect for another that brings out better qualities. It can change the atmosphere—of a workplace, a home, even a political arena. We don’t need to (and shouldn’t) respect behavior that is ungodlike. But the remedy isn’t disdain or disrespect for the person; it’s a better understanding of the fact that we are all made as the offspring of divine Love.

The second step is to consider my own heart. When a difference in viewpoint has prevented my respect for another, I’ve sometimes mentally argued as if it’s my understanding against their ignorance—and all this does is reinforce the rift. But to realize that some of my own most tightly held beliefs and opinions aren’t as rock-solid or accurate as I thought they were makes space for healing and progress.

It takes humility to loosen our grip on personal viewpoints, but humility allows thought to move forward—to gain a higher perspective—without compromising a standard. And it’s comforting to realize that both the other person and I are inspired by ideas from the same God. It just plain feels good to exchange disdain for respect. It’s a way of living the Golden Rule, of loving our neighbor as ourselves.

Mary Baker Eddy, the Leader of the Christian Science movement, lived at a time when women had few leadership roles in the public arena, but she rose above being ignored or even ridiculed to being one of the most widely recognized and highly respected women in the world. Her healing ministry, based on her understanding of Christ Jesus’ teachings and example, included seeing the Godlikeness and potential in everyone she interacted with.

Discovering the Godlike qualities our neighbors express is like finding Christmas presents we’d forgotten to unwrap!

She writes in the Christian Science textbook: “Take away wealth, fame, and social organizations, which weigh not one jot in the balance of God, and we get clearer views of Principle. Break up cliques, level wealth with honesty, let worth be judged according to wisdom, and we get better views of humanity” (Science and Health with Key to the Scriptures, p. 239).

This outlook allows for an atmosphere in which groups and individuals can contribute to society meaningfully, and even unexpectedly. Discovering the Godlike qualities our neighbors express is like finding Christmas presents we’d forgotten to unwrap! God-impelled respect reveals the unnoticed gifts all around us. It improves and even heals the relationships between family members, friends, neighbors, employers and employees, and politicians and their constituents.

In the airport a few weeks ago, a mother was busy taking care of her two small children. The girl spotted a pretty paper sack peeking out of her mom’s purse and asked what was inside. Her mom said, “Those are cookies for the plane. I’ll give them to you and your brother if you’re good.”

The girl’s face lit up. “Oh!” she said happily. “We are. We are good.” I couldn’t help laughing out loud, and in that moment, the mother’s face changed from worried and overwhelmed to delighted.

My sense of this happy scene was that the mother saw past the world’s expectations about traveling with small children to notice and appreciate some very respectable and Godlike qualities in her kids, such as obedience, joy, wisdom, and self-control. Rather than being a liability, the children could actually contribute to the plane ride.

Respect for others is a natural outcome of our growing understanding of the perfection of God and God’s idea, man—right now. Any time we interact with another, we have the opportunity to see through limitation and appreciate a representative of God, of divine Love itself.

As soon as I was old enough to watch the nightly news I was introduced to a world split between left- and right-wing viewpoints. My dad stood staunchly on one side of that political divide, and I “...

“The trouble is,” said my young, creative friend, “we love to argue ideas, but instead of coming together and agreeing (or respectfully disagreeing), we become more and more entrenched in our own c... 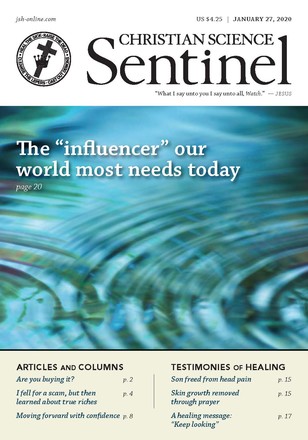 Are you buying it?

I fell for a scam, but then learned about true riches

From disdain to respect

Healing after a skiing accident

The “influencer” our world most needs today