During my first years of college a lot of my friends hitchhiked. We took classes at other schools in our small city, and if the buses couldn't get us there on time we "hitched." Since everyone did it, I didn't think much about it. I should have been wiser—it wasn't a very bright thing to do, I learned.

A friend was graduating at a school ninety miles away. The scheduled buses wouldn't get me there, and nobody's car was available. I was determined to go, so my thumb was up right after daybreak, the morning of the ceremony. The school was a lot farther than the couple of miles I was used to hitching, but I was sure I could handle it.

I got into the first car that stopped, but in a minute I noticed the driver was very nervous. My friendly chitchat made him worse, and he began to talk about a sexy movie that was showing in town. I said I thought it was sad that so much money was made on films that exploited people's weaknesses. The man stopped talking, and he was still restless and driving too fast.

It didn't occur to me that I might be in danger, but I did start to pray just because the man seemed so upset. My prayers had to do with understanding better that man is actually at peace with God and that nothing could make my brother man unsettled. After praying a few minutes like that I noticed a lovely John Denver song on the radio, and pointed out the words to the driver.

"Isn't it good that religion is getting more and more into our everyday lives?" I said.

Suddenly the car swerved to the breakdown lane, and the man gruffly told me to get out. "I picked you up 'cause I thought you'd fool around a little. But it's obvious you won't!" he said.

Standing on the side of the road, about fifteen miles out of town, I watched his car drive off. It was an odd feeling. I knew I had been protected, and I thanked God, but I also realized I had some thinking to do. My naiveness about hitchhiking had put me in a gross situation.

When I was home again I did some mental wrestling. I couldn't deny that God's inspiration had kept me safe. That realization strengthened my confidence in seeking God's help no matter where I was. Also, help had come; a family did give me a ride to the graduation. But somehow I now saw there was something wrong with ever putting myself in such a situation again.

A short time later I talked with my aunt, who was a Christian Scientist. She was interested in my friend's graduation, but when I told her I had hitched there, I could see she was trying not to be alarmed. We were both quiet, and then she said, "I know we can trust God for anything, but it seems to me that if it's right to go someplace, then there's a totally safe way to get there."

That idea interested me—traveling without risk, not because there is a humanly guaranteed way of getting places but because God directs us how to go. I had to be honest with myself. With all my strong desire to be at my friend's graduation, I had never asked God for direction. I had put my love for my friend before listening to God.

At this point I was impressed that even though I'd made a mistake, God still loved me enough to protect me, and the driver. But I knew that a more honest and safe way of doing things was to seek God's guidance first. As I was reading Science and Health by Mrs. Eddy, this statement stood out to me: "Desire is prayer; and no loss can occur from trusting God with our desires, that they may be moulded and exalted before they take form in words and in deeds." Science and Health, p. 1.

One of the reasons I often avoided seeking God's guidance was that I was afraid the answer would be "no," and then I would miss out on something. It was a change for me to trust God, divine intelligence, so much that even if my prayer resulted in a "no," there wouldn't be any feeling of loss.

The other thing I learned was not to be conceited—not to always think "I can handle anything." (However commonplace hitchhiking may be in some parts of the world, it can be dangerous, and the motive easily misinterpreted. And in some places hitchhiking is illegal.) It also took humility to recognize that God's power got me safely out of that car, and perhaps kept the driver from doing something regrettable. I felt that Truth had alerted me to the words on the radio, and Love had given me the wisdom to speak to the driver about them. My prayers had been important because they brought me more into agreement with what God was knowing and doing. And Christian Science teaches that self-government is based on reflecting God's government, not on using prayer to accomplish what we personally want.

Sometimes it seems important to prove we can handle things ourselves, without parents or teachers or friends telling us what to do. But the real issue is whether we're trying to live by human will (our own or somebody else's) or by listening for God's directions. Mrs. Eddy writes: "In a world of sin and sensuality hastening to a greater development of power, it is wise earnestly to consider whether it is the human mind or the divine Mind which is influencing one." Ibid., pp. 82–83.

It was good when the following fall my school joined with the other colleges to set up a shuttle bus service. And even though it was two more years before I got a car, I didn't hitch again. Since that incident it has been interesting to see how yielding to divine direction has kept me safe. If praying leads me to move away from something I want to do, there is always something even better to take its place.

Praying as Christian Science teaches is powerful enough to get us out of the worst situations; but we can feel God's power all the way when we're humble enough to ask His direction first. 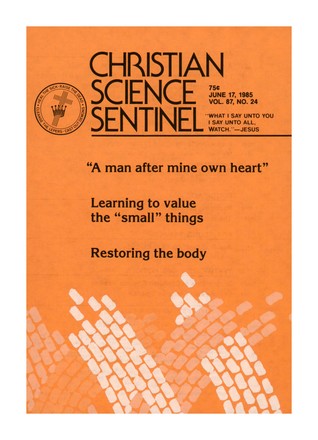 "A man after mine own heart"

Learning to value the "small" things

Handling the "serpent"— the lie of evil

The motive behind the action

It had been a very rough year for my husband...

By JUDY WOLFF with contributions from RUSSELL WOLFF | June 1985

Some years ago I suddenly started receiving obnoxious telephone...

Once my cousin was going to sleep over at my house and...

The testimonies of healing in the Christian Science periodicals...