Christian Science has been the only religion I have known. I attribute a life blessed with peace, health, and harmony to this fact.

There have been conclusive proofs of God's healing power. When I was a child, a doctor diagnosed my condition as asthma and prescribed treatments that would cost more than my father was earning at that time. This was during the depression.

One summer I served as a camp counselor. One of the campers in my unit was suffering from a painful ear condition. I felt much pity for her. In a very short time I too was experiencing the same difficulty. This occurred during the night, and I was frightened. I telephoned long distance to my parents. My mother calmly assured me that God was with me as surely as He was there at home with her. She said that she would give me a Christian Science treatment. By the time I returned to my cabin the pain had ceased. The swelling took a couple of days to disappear; but no one noticed it, and I was free to work this problem out through Christian Science.

I had the privilege of witnessing a healing of a member of our family of what I believe was a tumor. With the help of a consecrated practitioner, we searched Mrs. Eddy's writings for fresh inspiration and found much food for thought. Many old resentments and pressures were routed out. However, after a particularly dark night the patient said that she had endured all she could and that the pain was such that she felt she must resort to surgery.

It came to me to speak firmly to this dear one. I reminded her that the truth she had taught us all these years had not forsaken her. She was also reminded that Paul wrote to the Hebrews (4: 12): "The word of God is quick, and powerful, and sharper than any twoedged sword."

Within minutes the patient was up and changing the linen on her bed. The condition had passed off. She was free! The practitioner came to the house shortly thereafter. In her treatment she had known the prayers were answered, and she felt that something wonderful had happened. She was there to witness the healing. Great rejoicing was heard that day after such conclusive proof of the power of God.

I cannot doubt the omnipotence of God, and the greatest gift I have is Christian Science, which teaches me how to use this power. 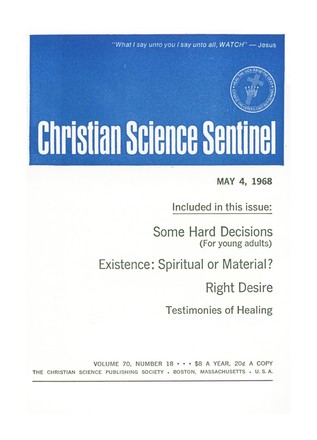 Is Your God Able?

"Present your bodies a living sacrifice"

Christian Science was presented to me approximately thirty...

How great my debt is to Mary Baker Eddy for setting down her...

Christian Science has been the only religion I have known

My expression of gratitude to God for Christ Jesus and for...

By Vonnie Rieke with contributions from Edward William Farhood | May 1968

I was raised in Christian Science, and though I never strayed...

with contributions from Vickrey Dougherty, R. Gopaldresg | May 1968