Biases. We all have them. The question, says David Clark Scott, Audience Engagement Editor at The Christian Science Monitor, is: What do we do about them? At a time when readers seem more and more politically polarized, Mr. Scott talked to the Christian Science Sentinel’s Jenny Sawyer about how we can all learn to read—and think—with more integrity, and the payoffs of doing so.

Let’s start by looking at the news from your vantage point as an editor. To tell a story, you have to have an angle—a particular way of framing the story—and finding that angle can be a place where writers may fall prey to bias. How do you deal with that?

For me it’s about challenging bias. As you said, bias is kind of inevitable. So telling or editing a story with integrity means making a commitment to pursue the truth—wherever it lies. I don’t want my own political bias to interfere with my pursuit of the truth. And so part of the goal of going after the truth is having the integrity to challenge your assumptions.

Often I actually play a piece through my head and think about certain conservative or liberal family members. And I’ll ask myself: If they read this, how would they respond to it? Would they find it accurate and honest? Or would they find it inaccurate, or lacking in perspective?

What about as readers? How can we deal with the biases that might make us susceptible to everything from skewed news to actual fake news?

What I think of immediately is a story we reported on in the Monitor Daily about Finland. Finland has been fighting Russian disinformation for about a century, and I love what Jed Willard of Harvard University in Cambridge, Massachusetts, said about the Finns’ “super power” in this battle: “They know who they are. And who they are is directly rooted in human rights and the rule of law.”

That goes right to Monitor founder Mary Baker Eddy’s statement in Science and Health with Key to the Scriptures: “Know thyself, and God will supply the wisdom and the occasion for a victory over evil” (p. 571).

Now with the Finns, Mr. Willard says their national identity is built on the qualities of humanity, justice, law and order. So knowing this identity helps protect them from disinformation. Taking that one step further and looking at Mrs. Eddy’s statement through a spiritual lens, the lens of Christian Science, you could say, then, that “know thyself” is really about knowing our spiritual identity—our God-created identity. What are the qualities that are ours because we’re the image of God, as it says in Genesis 1?

I don’t want my own political bias to interfere with my pursuit of the truth.

That word intuitively is so key. I often find it reassuring to remember that because each of us is God-created, Truth-created, we must each intuitively know what’s true. Because we each have what Mrs. Eddy calls “spiritual sense”: “a conscious, constant capacity to understand God [Truth]” (Science and Health, p. 209).

Right. And that capacity means that we can see past our biases and know whether a story is genuinely true, genuinely helpful, or whether we’re sharing it with the intent to reinforce our position and incite those we perceive to be on the other side.

When we really take Mrs. Eddy’s statement to “know thyself” to heart, we do know whether what we’re sharing on social media is true, honest, and accurate, or whether we’re thinking on some level, “I don’t know if this is true or not, but I was entertained, so I’ll share it anyway.” Or maybe we’re sharing something to try to win people over to our side. We have to be willing to examine our motives for how we read the news, and what we do with that news, if we’re serious about the pursuit of truth.

And why is that pursuit of truth so important? Well, if you look at the Mueller report, for example, it points out that the goal of Russian interference and most disinformation is to sow division. To create separation between you and others.

Exactly. So then the question becomes: How do we fight that impulse to score points instead of pursue truth? And that goes back to knowing where our innate desire for truth comes from—from God. And we can pray to see that expressed in our lives. Like the Finns, we can know our identity—that integrity is included in our spiritual nature.

It reminds me of the story of David and Goliath in the Bible. Here was David, a shepherd boy, set to do battle with this giant, Goliath. What did he take to arm himself? Not a sword or a shield, but five smooth stones. Because he knew himself and his strengths and fought in a way that was true to who he was.

Every individual’s identity, as the image of God, or Truth, is to express integrity.

So when we think of the Goliaths—the big lies—that we’re fighting, we can be like David. We can arm ourselves with what we know to be true about ourselves—the smooth stones of honesty, justice, integrity, love, and so forth. Those are a more than adequate defense against any lie.

What about those times when we feel like we don’t want to fight the disinformation because we want to be on the winning side? That fear of not having politicians in power who are working for the things we care about can feel pretty gripping.

We do have an all-powerful God that’s in charge; so intelligence, Truth, and Love actually are governing. And I think our work as people who care enough to pray is to affirm that and to affirm the Genesis 1 narrative, in which God is supreme and in charge and His universe is very good. We don’t live in the Genesis 2 narrative, which is full of lies and fear and division.

This might be hard to hear, but I do think politics can be built up into a kind of god. Just think about how much thought we give to it, how much power. But there is only one power. One God. And this God is good and really does govern all of us as His image.

So from that perspective, what’s the role of news?

I think it’s to lift thought out of divisiveness and fear into a more elevated, or you could say spiritual, place where readers can identify the qualities of God at work. I often go back to Mrs. Eddy’s statement that the Monitor’s purpose is “to spread undivided the Science that operates unspent” (The First Church of Christ, Scientist, and Miscellany, p. 353). And she defines Science in one place in Science and Health as “the laws of God” (p. 128).

So we’re spreading the laws of God that are operating unspent in the world. The laws of truth, the laws of justice, the laws of compassion, the laws of respect and stability. And it’s the responsibility of our news organization to record that, and to see it in the events that are going on. And to help readers see that that’s really in operation.

The payoffs are that we actually have more people looking for and witnessing those things going on in the world. And this has a healing effect: There’s more of a recognition of integrity, humanity, and justice. More peace. And more clarity and wisdom about the true paths to progress.

A version of this article was published on sentinel.christianscience.com, July 8, 2019.

The truth without darkness and despair

By the time I was twelve, I knew I wanted to be in the news business. By the time I was sixteen, I knew the reason why: because being a reporter, being in news, was the closest thing I could find t...

the POWER of KNOWING your own HEART

Knowing ourselves is only possible if we know others too, in their spiritual identity.

Listening to, and loving, one another

The Greek philosopher Epictetus said, “We have two ears and one mouth so that we can listen twice as much as we speak.” It’s useful advice. There’s value in “… encouraging differing points of views... 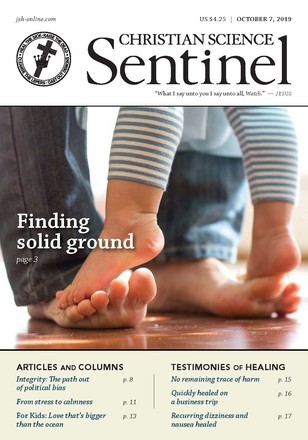