During the summers after my sophomore and junior years in college, I worked as an intern with the United States House of Representatives in Washington, DC. Being in the thick of all the political action was an exhilarating experience for me, but also very challenging.

One of the most common responsibilities for congressional interns is answering phone calls from constituents. It takes a lot of patience. It’s not unusual for the person on the other end of the line to yell and curse about the latest breaking news. People aren’t typically in a good mood when they’re calling their congressional representatives.

At one point during my second summer in Washington, various activist groups posted our office phone number all over social media platforms with instructions on how to harass us about a particular issue. For a week straight, the two other interns and I had our ears to the phones from early morning until we left the office at the end of the day. We spent that whole week taking messages from Americans about their frustrations with the current state of affairs. It was exhausting.

I was tempted to feel sorry for myself, but instead took some time to pray. As overwhelming as the job felt, I knew I wasn’t really doing it on my own. I affirmed that God was right there, supporting and guiding me. Since God is infinite Mind, He is the real communicator, so I didn’t need to fix anything for these people; I just needed to express divine Love, because in reality Love was embracing us all.

After I prayed, I went back to answering the phones with a whole new outlook. Rather than seeing it as one hundred people a day yelling at me, I began to welcome this task as an opportunity to listen compassionately and tell them to have a great day as the call ended.

Among all the people I talked to that week, one woman came at me more aggressively than the others. As soon as she heard my voice and realized I was a woman working for a different political party than hers, she called me a traitor, a pawn, and worse. She questioned my morals, insulted my intelligence, and even told me she hoped my children would die one day.

While she continued to spew colorful epithets, I closed my eyes and reached out to God for help. I knew that because my only motive was to reflect God’s love to every person calling our office, I could not be harmed. I realized, too, that this woman’s aggressive attitude was no part of her real nature. God, the creator of us all, did not make a hateful, toxic attitude.

My next thought was a statement Mary Baker Eddy makes on page 571 of Science and Health with Key to the Scriptures: “Clad in the panoply of Love, human hatred cannot reach you.” These words came to me louder than the raging voice on the phone, and I began to feel compassion for this woman. I understood that she was lashing out because she was afraid. I realized that “angry caller” was not her true identity. She was a child of God, whose true character was good, and I loved her.

Suddenly her tone changed, and she began to apologize for the comments she had made. She said she didn’t really mean them but was just frustrated—and grateful for how professionally I had handled her remarks. I was able to sincerely thank her for calling and wish her a good day, and we hung up amicably.

Later, I recalled Mrs. Eddy’s reply to those asking about her politics: “I have none, in reality, other than to help support a righteous government; to love God supremely, and my neighbor as myself” (The First Church of Christ, Scientist, and Miscellany, p. 276). I had read this statement before, but having that experience with the woman on the phone helped me understand more fully what it meant.

Prayer that acknowledges God as supreme over all unites rather than divides us. It can help us overcome the current trend toward hateful partisanship. As we strive to see each other as children of God rather than members of a certain party or interest group, we learn how to exercise our divine right to love our neighbors as ourselves. And by doing so, we express our love of God.

Despite the challenges of politics, it is a valuable area of human endeavor, and prayer can help us uplift and purify it to better serve humanity. As we turn from the misleading picture of warring personalities and parties, and see and love everyone as neighbors in Christ, we are aligning ourselves with the kingdom of God—our true, spiritual government. And that brings divine Love’s healing power to bear on political affairs.

People sometimes joke that Washington, DC, is a godless place, but I know that’s not true. God is omnipresent, and I feel His presence in our nation’s capital because I see evidence of it in the many people I’ve met there who are serving their fellow man with honesty, integrity, and compassion for all, regardless of politics. 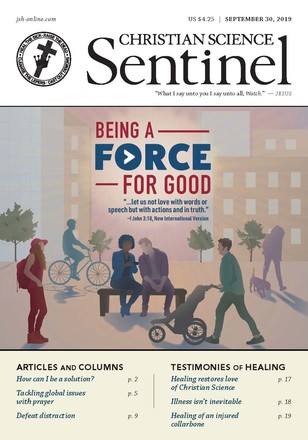 How can I be a solution?

When a congressional intern prayed about partisan hatred

Church: A force for good (part one)

Healing of an injured collarbone

A profound and provable reason for hope