One of the richest experiences that has come into my life, during the many years I have been a student of Christian Science, was a sojourn over two years ago at our beautiful Benevolent Association Sanatorium at Chestnut Hill, Massachusetts. I entered the sanatorium in a condition of extreme suffering, having battled with error for many months, and there was quite a definite feeling in my thought that I was really fighting "the last enemy." For a long period it had been impossible to retain food of any sort, and at times even partaking of small amounts of liquid nourishment caused protracted stomach hemorrhages. While at the sanatorium I was under constant nursing care for eight weeks; and for much of that time it was a difficult battle to rise above a condition of great suffering. At the end of eleven weeks I left the sanatorium, physically free, expressing health in both appearance and bodily functioning, able to enjoy daily walks around the beautiful estate, and also some hill climbing.

I shall always be grateful for this experience and for the love and kindness shown me there by everyone with whom I came in contact. It was indeed a glorious experience to work out a problem in an atmosphere where each worker is striving to keep thought clear to see only the perfect man, and where everyone is intent on studying those two great books, the Bible and the Christian Science textbook, Science and Health by Mrs. Eddy. I did not encounter any sense of a coldly pseudometaphysical attitude; on the contrary, from the time I entered the doors of the sanatorium I felt I was among warm friends. Everything possible was done for my human comfort and to encourage and help me prove the unreality of the claim of error.

This healing showed me that these trying human wilderness experiences can prove to be just what our Leader, Mrs. Eddy, tells us in her definition of "wilderness" in Science and Health (p. 597), which is, in part, "The vestibule in which a material sense of things disappears, and spiritual sense unfolds the great facts of existence." For when thought is lifted to what Mrs. Eddy calls "the great facts of existence," we realize that disease never has had a history, never has had any existence, and that the real man has never been touched by evil.

It is now more than two years since I left the Sanatorium at Chestnut Hill, and the intervening period has been one of continuous, normal activity with a greater sense of physical and mental freedom than I have known for years.

Each year unfolds a deeper sense of gratitude to God for our Leader's great revelation of Truth to this age. I am grateful for membership in The Mother Church and for the opportunities that have come to me to serve in the activities of a branch church. I am especially grateful for those genuine, consecrated Christian Science practitioners who have stood with me in times of stress and need, with no thought other than to see the glory of God revealed in human consciousness.—(Miss) Marion S. Kelly, Evanston, Illinois. 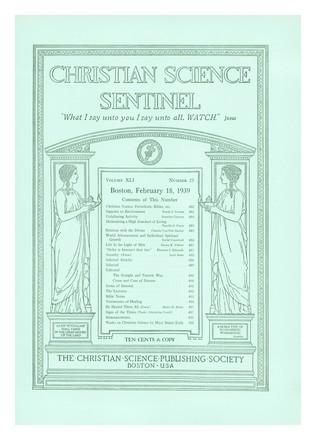 Maintaining a High Standard of Living

Relation with the Divine

Life Is the Light of Men

There is much in a lecture reported in a recent issue with...

A recent issue contains a contributor's comments on a...

Aaron E. Brandt, former Committee on Publication for the State of Pennsylvania, | February 1939

Kindly grant me space to reply to some remarks regarding...

Addresses under the auspices of Committees on Publication...

The Straight and Narrow Way

Cause and Cure of Disease

About six years ago, I became acquainted with Christian Science

For years I had been satisfied with the theory, held by...