I wanted to feel led by God, the divine Parent of us all.

How I became a parent

In my heart I always felt that I would become a mother. I was never anxious about this. Three years into our marriage, my husband and I began seriously talking about having a child. Soon, I became pregnant. We were so happy—but sadly, there was a miscarriage. What followed was a consecrated time in which I listened to God in my yearning prayers more closely than ever before.

I eventually stopped outlining what could happen, because I wanted to turn everything over to God.

My husband was resilient and a strong moral support to me. He felt we should try again. I, however, wasn’t so sure. As I thought more about it, I discovered I was afraid of going through the birth process. I also wondered if we had waited too long to have a baby. My husband and I were open to becoming adoptive parents, so I thought maybe that would be a possibility. All of these thoughts whirled around in my head like a merry-go-round. It was mentally exhausting, to say the least. I eventually stopped outlining what could happen, because I wanted to turn everything over to God. I wanted to feel led by the divine Parent of us all.

Although I wasn’t completely sure how we would become parents, I began to hold tightly to this statement (in which Mind is a synonym for God) from Mary Baker Eddy’s book Science and Health with Key to the Scriptures: “Mind’s infinite ideas run and disport themselves” (p. 514). One definition of disport is “to move lightly and without restraint” (Noah Webster, American Dictionary of the English Language, 1828). I thought about each idea, each identity, moving freely about the spiritual universe. I stopped thinking so much about having a baby and began to focus more on being part of the grand circulation of these lovely, loving, and useful ideas. I began to look for practical ways to apply this concept in my experience.

I had a dear friend, a mother of three, whose daughter needed a violin. I had a violin—the one I had played when I was her daughter’s age. I had thought I would one day pass it along to my own child. But in my prayers, I felt God was saying, “Give the violin to this dear girl—My child.” I was obedient, and felt a sudden joy and lightness of heart. My friend’s whole family was joyous, and I was joyous—more importantly, I was beginning to see myself as a part of God’s grand circulation of ideas. This was a revelation for me!

Later, a family close to me was bringing their newborn baby home for the first time and invited me to be a part of this celebration. I initially felt a downward pull in my heart because this baby had been born at nearly the same time mine would have been. I knew I needed to surmount this negative emotion—to push back against it with genuine, unselfish love and embrace more fully the spiritual fact that good perpetually circulates for all of God’s children.

When my heart was ready, I went to this family’s home. Of course, I felt nothing but pure joy when I held the baby. It was a very special day. I rejoiced for my friend, and later in the week I found out that I was pregnant.

The previous year, I had been working prayerfully to get my own desires out of the way and to make space for God’s parenting and His loving provision for His children. I knew that by taking this further, I would be able to approach the birth fearlessly. I could feel God parenting me! With the steadfast help of a Christian Science practitioner as well as more prayer and a deep study of Christian Science, I conquered every fear and experienced a harmonious birth.

Christian Science has lifted me time and again far above my own human yearning to a place where I am simply an active witness to what our divine Parent is doing. I am forever grateful for Christ Jesus, the Way-shower, who showed us how to live from the standpoint of unselfish love. I’m also grateful for Mary Baker Eddy, who illuminated this pathway so clearly through her discovery and articulation of Christian Science—a gift that continually brings healing and happiness into my life.

These days I delight in the ways in which my five-year-old tells me about her divine Parent. She sees something of how we each reflect the infinite nature of God. For example, she recently told me, “Mom, there’s no starting or ending to you.” I think that says it all.

Send a comment to the editors
NEXT IN THIS ISSUE
Turning Points in Spiritual Growth:
Soap opera cravings washed away 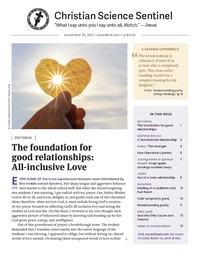