There are no laws against thinking what we want to think. We're free to think and believe as we choose.

Why, then, do people sometimes choose to be angry? Or depressed? Or discouraged? If it really is up to us, why not decide to be always happy and confident? Because we believe that it's life's events—either good or bad—that steer our thoughts and feelings. Things go well, and we say, "That makes me happy." Things turn sour or someone offends us, and our first impulse may be, "That makes me so mad!" Or sad. Or discouraged.

But we do have an option. We can learn how to gain, and retain, control of our thoughts and lives, rather than simply react to things that happen around us.

The Bible character Joseph is a good example. Joseph's brothers threw him into a pit, and he was sold into slavery in Egypt. But he became highly successful in Egypt, overseeing the house of one of the pharaoh's officers. Then he was framed, and his master threw him into prison. Despite the injustice, Joseph maintained his dignity and usefulness through all the ups and downs. He was put in charge of all the prisoners. And eventually he had the opportunity to redeem himself in the eyes of the pharaoh, who appointed him second-in-command over Egypt. He helped provide enough food for the people during a seven-year famine. Despite the severe troubles Joseph faced, he was able to do a lot of good, and eventually he became reconciled with his family.

How did Joseph continue to keep his faith, and his wits, when things went wrong? It seems clear that he let his understanding of God's power—and not the misfortunes he encountered—shape his feelings, his attitude, his entire outlook on life. You might say that Joseph's brand of thinking doesn't consider sadness as being a legitimate alternative to joy.

If things go bad, and you start to feel down, you can determine instead to look to God and feel His unending love for you. When you welcome God into your life, begin to understand His nature, and live a little more of it every day, you find yourself feeling happier and more useful. Depression, frustration, discouragement, doubt, fear—not one of these dark feelings has the power of God behind it. This gives you authority to reject them as being illegitimate.

To feel happier, you can start to base your feelings on what you know about your relation to God, not on what the situation is at the moment. Joseph wasn't pushed around by how good or bad things were going from one day to the next. You don't have to be pushed around, either. Through prayer, you can feel more of the consistent joy that comes from knowing God is Love and loves you. This will lift you up and move you forward. 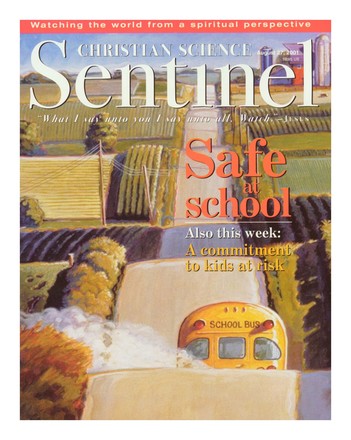 A commitment to kids at risk

How I got my happiness back

What does God want from you?

Fear and loathing on the kindergarten circuit—healed

Intelligence, intuition, wisdom they're yours for the taking

God's power present in an emergency

The trip goes on as planned

Trust in the power of God

'When you pass through the waters...'