Years ago I visited a facility for people diagnosed as mentally ill. One day at lunchtime I heard a ruckus upstairs, and since there was no staff around, I ran upstairs to discover a young man angrily overturning chairs. When he saw me, he made a beeline to where I was standing at the top of the stairs.

But just a step or two before he reached me, he abruptly stopped in front of a glass case on the wall and raised his clenched fists over his head to break the glass. Since there was no one around to help and I had only seconds to react, I simply yelled, “God is Love!”

Though still new to Christian Science, I had read and heard that statement several times, and that bit of knowledge turned out to be all that was needed. His arms stopped midair, and he dropped them loosely to his sides. His demeanor changed completely—he became calm, and we quietly walked downstairs and joined the others for lunch. The man’s thought was touched through that simple but assertive declaration of Truth, and the anger dissipated.

Later, as I contemplated what had happened, I could see the applicability of this Bible verse: “For the word of God is quick, and powerful, and sharper than any two-edged sword” (Hebrews 4:12). I realized that no matter what discordant situation I might come across, and no matter how imminent the need, I could trust God’s ability to replace any false material belief with the spiritual truth, and expect healing results. In this case, the false belief was that this man was out of his right mind and being controlled by anger. By declaring Love’s presence, the anger and aggression were immediately proved powerless and disarmed, and the truth that divine Mind alone governs man and is in control was manifested—the man became calm. What an important truth to know and demonstrate in an age faced with what seems like great mental turmoil.

In Science and Health with Key to the Scriptures, Mary Baker Eddy discusses how to pray about mental illness: “The arguments to be used in curing insanity are the same as in other diseases: namely, the impossibility that matter, brain, can control or derange mind, can suffer or cause suffering; also the fact that truth and love will establish a healthy state, guide and govern mortal mind or the thought of the patient, and destroy all error, whether it is called dementia, hatred, or any other discord” (p. 414).

God hath not given us the spirit of fear; but of power, and of love, and of a sound mind.

Christian Science makes it clear that in all cases, the material evidence is unreal and untrue. So rather than being frightened or impressed by erroneous claims, such as symptoms of mental illness or a disheartening diagnosis, we should declare and maintain what is spiritually true of a child of God, namely, health, stability, and wholeness.

In Mark we read an account of Christ Jesus healing a man who was mentally ill. Jesus wasn’t daunted by the labels or diagnoses attributed to the people he healed, whether it was a physical illness or a mental ailment. Jesus knew they were all false claims. And so we read that the man, after Jesus healed him, was “sitting, and clothed, and in his right mind” (see Mark 5:1–20).

In Matthew, it is written that the disciples asked Jesus why they had been unable to heal a child who suffered from epilepsy. Jesus responded: “Because of your unbelief: for verily I say unto you, If ye have faith as a grain of mustard seed, ye shall say unto this mountain, Remove hence to yonder place; and it shall remove; and nothing shall be impossible unto you. Howbeit this kind goeth not out but by prayer and fasting” (17:20, 21). Dedicated effort in prayer and study, and practicing the truths we are learning, equip us with the faith and spiritual understanding we need to see beyond the outward scene, to what is true spiritually about God’s man. Both Jesus and Mary Baker Eddy explained and demonstrated this for us.

There was a time when I was working as a caregiver for a man who had been diagnosed with Alzheimer’s. I constantly reminded myself that there is one Mind, and, much to the surprise of this man’s conservator, we enjoyed activities he hadn’t done for years—he was less agitated, more trusting, and happier when we were together, and in general. In reality there is only one, unchanging Mind, controlling and governing thought and action, and we needn’t accept any prediction to the contrary.

Our expectation should always be that the truth of being can be demonstrated, manifested as a sound mind and body.

In Science and Health, Mrs. Eddy writes: “The relations of God and man, divine Principle and idea, are indestructible in Science; and Science knows no lapse from nor return to harmony, but holds the divine order or spiritual law, in which God and all that He creates are perfect and eternal, to have remained unchanged in its eternal history” (pp. 470–471).

So despite a society in which diagnoses, symptoms, and predictions abound, especially in regard to mental illness, our expectation should always be that the truth of being can be demonstrated, manifested as a sound mind and body. At all times the label we should claim for ourselves and attribute to others is “spiritual,” for that term describes us perfectly because it includes all of our God-given and eternal qualities. 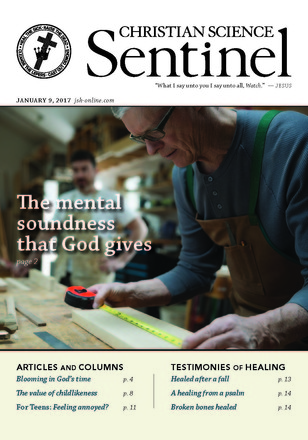 The mental soundness that God gives

The value of childlikeness

Healed after a fall

A healing from a psalm

By The Monitor’s Editorial Board | January 2017

To move beyond past wrongs

The joy set before us