When I am perplexed by questions about family life—decisions involving everything from business to personal choices, care of elderly members, or angst over a teenager—I sometimes recall these words written by the Discoverer and Founder of Christian Science: "To my sense the Sermon on the Mount, read each Sunday without comment and obeyed throughout the week, would be enough for Christian practice. The Word of God is a powerful preacher, and it is not too spiritual to be practical ..." (Message to The Mother Church for 1901, Mary Baker Eddy).

I realize that I probably need to get my thought and motives much closer to the example of Christ Jesus and his Sermon on the Mount. To me, what Jesus taught says again and again, "God is Love. Our Father loves every one of His children. We can love each other. Man is upright. Life rightly includes healing and casting out sin."

From a family standpoint, I've always felt that at the center of Jesus' teaching is the parable of the two sons in the Gospel of Luke. It's almost a distillation of Christian love and law, given by an eyewitness named Jesus.

Even though this parable is a teaching device, still the student feels compelled, not coerced. The lesson is not too hard to identify with. It illustrates, through regeneration and reconciliation, the healing of broken families, poverty, jealousy, apathy, rebellion, self-righteousness. It's like a family biography, handed down century after century.

As a teenager I identified most often with that younger child who rebels and leaves home, then comes to himself and returns.

Later, while my own children were young, I would read the story from the point of view of the father. Then I understood how he yearned over those boys, wanting to respect their manhood, yet knowing each one had to find the way himself.

That's an awesome lesson—knowing when to let youngsters make their own decisions, when to intercede in order to protect them from terrible consequences, how to wait until they come to themselves.

The father in the parable must have known where his younger son had gone and the kind of life he was leading. But only when the son had come to his own awakening and was on the homeward road—only then—did the father run to meet him. And the father came with unconditional love and trust that the hard lessons had been learned.

Once he recognized his "sin against God," this son thought of home. He probably wouldn't have risked being rejected by his parents unless he was certain they would still love him.

So the Master was perhaps saying something about the quality of parenting—that a child should be able to expect there will always be love for him at home. A parent might be heartbroken over what a child has done. He might even consider such behavior as bad as death, but he would never stop loving him.

In 1990 a contemporary setting and analysis of the parable might raise all sorts of questions about why the younger brother did such a dumb thing. Why the rebellion? Whose fault was it that he didn't like it at home?

Maybe the mother was too strict. Maybe the kid had a poor self-image and couldn't get into a really good college. Maybe the enticements of drugs and easy sex in a culture that doesn't value responsibility were too much for him. Maybe his big brother beat up on him.

Whatever the influences may be, healing doesn't come from human analysis. It comes, though, when the light of Truth exposes mortal mind and material dependency for what they are: impotent, arrogant, and self-destructive.

Sometimes besieged families feel, in a manner of speaking, as if our whole culture had become the prodigal—taken the inheritance and gone to a far country. But when the spending is done, the glamour of sensualism has lost its mask, and there are no friends, no nourishment, the spirit of Christ is there, turning the children (turning us) to our Father-Mother.

We all know parents who never give up on their youngsters. These parents learn to yield their personal outlining as to just how their youngsters can make their return. There is usually a dear-bought humility, a purity of love that reflects the peaceable kingdom established by trusting God.

In the Bible story there isn't a hint that the returning prodigal met with rebuke from his parents. "Matthew, look at those filthy rags you're wearing. Your hair is a mess, and why are you wearing an earring? I hope you haven't brought any of those awful friends of yours home. Quick, get inside the house before the neighbors see you."

Families often need to feel long-suffering patience with the one who returns. He or she may require lots of nourishment, reassurance of love, again and again. He or she may have had a rough time.

The father's trust had been badly abused. Perhaps he had feared for his son's life and been angry. But the forgiveness was instant, unconditional. And this is the kind of forgiveness Christ Jesus expected of his followers.

Whether the family scene is considered from the standpoint of the prodigal, the brother, the parents, step-parents, or a grandparent, regeneration and reconciliation are needed and possible. What takes place through prayer is a breaking away from material, personal outlines of what ought to happen.

And since God never gives up on His children, how can we give up on our own, or anyone else's children, for that matter? If we are trying to live as Christian Scientists, we want to keep the faith; we are involved in washing away the motives for sin. The commitment is to following a counsel offered by Mrs. Eddy: "Beloved Christian Scientists, keep your minds so filled with Truth and Love, that sin, disease, and death cannot enter them. ... Good thoughts are an impervious armor; clad therewith you are completely shielded from the attacks of error of every sort. And not only yourselves are safe, but all whom your thoughts rest upon are thereby benefited" (The First Church of Christ, Scientist, and Miscellany).

The story of a modern prodigal son illustrates the practicality of such trust in prayer. A young man I knew developed a serious drinking problem in high school. Soon he was involved with other drugs, and then with dealing drugs.

The boy had a grandmother who loved him dearly. She kept her thought on Truth and Love, and, with his permission, she often prayed for him. He loved her and liked to listen to her explain God's love and his true identity as His child.

"Grandma, you're the only one who believes in me, and I like to hear you talk about God. I don't really want to do bad things," he told her.

When James was arrested and charged with drug dealing, the parents telephoned his grandmother. They asked her to pray and to "call one of those practitioner people." A Christian Science practitioner went to see James in jail, and a great deal of love and spiritual prayer entered the scene. The grandmother simply refused to let her beloved grandson be "lost" in the illusion of sensualism and rebellion and rejection. She prayed to see the son of God's making, not a wounded mortal.

It was not a quick coming to himself, but in that "far country" James began to find something of his God-given dominion. He honestly wanted to reform. His sentence was suspended. A steady and impressive healing of resentment and of alienation from his parents began. Over a period of years there was reconciliation, and a more enlightened standpoint for family relationships began to emerge.

The young man took on a responsible job. He married and had a family and has become a useful member of society. To the grandmother the long, difficult lessons were an illustration of a willingness to trust God and turn away from everything material.

This message from Science and Health with Key to the Scriptures by Mrs. Eddy was close to the grandmother's thought: "Breaking away from the mutations of time and sense, you will neither lose the solid objects and ends of life nor your own identity. Fixing your gaze on the realities supernal, you will rise to the spiritual consciousness of being, even as the bird which has burst from the egg and preens its wings for a skyward flight."

The self-knowledge that offers spiritual insight and correction opens our arms to the pure love of God, the Father-Mother. The forgiveness standpoint of divine Love is, There is no material life, sensual love, self-destructive tendency. God, as Father-Mother, says "I am All. I know only good. I see My perfect son. I am law that wipes out whatever suggests evil. There can be no addictive nerve or mesmeric attraction. The son has his Father's intelligence, his Mother's strong love, because I am all substance and intelligence. My son therefore must always be capable of having dominion."

Because attention must be paid to family troubles, whether it's an elder son seething with the unfairness of it all, a worried father, a too-timid-to-speak-out mother, or a youngster leaving home, prayer does help. The motives for sin, material trusts, personal love, can be washed away in the purity of spiritual love. We can open our own eyes to God's unconditional love. The effect of this breaking away from the human scene is a better focus on what our Father-Mother God knows is true of His children. 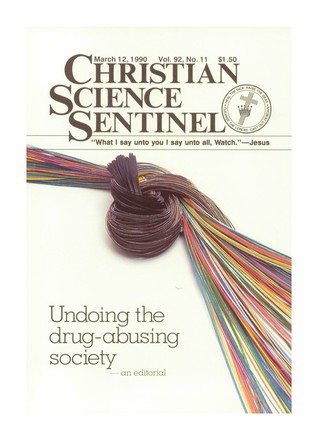 What it takes to forgive

Go straight for the goal

By The Christian Science Board of Directors | March 1990

A different kind of learning

The filly who liked caps

A Couple of years ago when I was dancing in a ballet company,...

Just prior to a trip, my husband and I pray specifically...

Since I was raised in Christian Science, I have had many...

The words Christian Science first came to my attention when...

The time for final examinations at my university was approaching