The nature and position of mortal mind are the opposite of immortal Mind. The so-called mortal mind is belief and not understanding. Christian Science requires understanding instead of belief; it is based on a fixed eternal and divine Principle, wholly apart from mortal conjecture; and it must be understood, otherwise it cannot be correctly accepted and demonstrated.

The sick, like drowning men, catch at whatever drifts toward them. The sick are told by a faith-Scientist, "I can heal you, for God is all, and you are well, since God creates neither sin, sickness, nor death." Such statements result in the sick either being healed by their faith in what you tell them—which heals only as a drug would heal, through belief—or in no effect whatever. If the faith-healer succeeds in securing (kindling) the belief of the patient in his own recovery, the practitioner will have performed a faith-cure which he mistakenly pronounces Christian Science.

In this very manner some students of Christian Science have accepted, through faith, a divine Principle, God, as their savior, but they have not understood this Principle sufficiently well to fulfill the Scriptural command, "Go ye into all the world, and preach the gospel." "Heal the sick." It is the healer's understanding of the operation of the divine Principle, and his application thereof, which heals the sick, just as it is one's understanding of the principle of mathematics which enables him to demonstrate its rules. 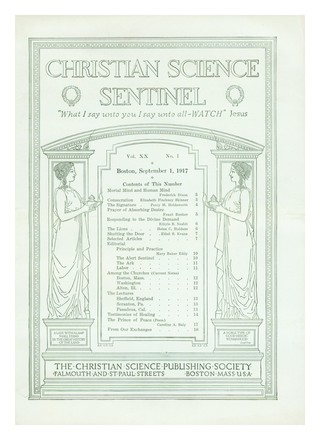 Responding to the Divine Demand

Bibles for American soldiers and sailors, to be given...

The value of newspapers and magazines in spreading...

Many members of the clergy are apparently stirred by...

It is well known that the growth of the Christian Science...

In the report of a discourse in the Ealing Congregational Church...

The report of a sermon delivered in Trenton by a revivalist...

Our critic states: "The Bible says, 'It is appointed unto...

The Citizen prints a contribution by an official representative...