“I am asked, ‘What are your politics?’ I have none, in reality, other than to help support a righteous government; to love God supremely, and my neighbor as myself” (The First Church of Christ, Scientist, and Miscellany, p. 276). This modest yet profound statement, penned by the Discoverer and Founder of Christian Science, Mary Baker Eddy, may be the key to elevating the nation’s conversation about the US elections taking place in two weeks.

The responsibility of good citizenship requires that we learn the issues and qualifications of the candidates and make the choices that conform to our highest sense of right. But our responsibilities as metaphysicians run far deeper. They are, no matter who wins, to know that God, in Mrs. Eddy’s words, will “uphold our nation with the right arm of His righteousness” (Christian Science versus Pantheism, p. 14), and that He will guide the leaders of all three branches of government with the wisdom and vision they need. It is in this way that we most effectively support the righteous governance that was the essence of Mrs. Eddy’s politics.

Beyond the question of which presidential candidate wins, is another, perhaps larger, question: How can either candidate govern effectively in the prevailing environment of acrimony and distrust? One close British observer of the American political scene predicts that “Americans dismayed by the 2016 elections should brace themselves: next year political divisions will probably deepen” (“Gridlock Central,” The Economist, August 6, 2016).

Disagreement is not new to politics. But analysts point to factors that tend to exacerbate and even institutionalize partisan tensions. Effective prayer that counteracts these trends begins with the understanding that the government is on God’s shoulders alone, and with trust and confidence in His disposition of events. Such confidence and prayer help neutralize the partisan divisions that have isolated many Americans in non-overlapping political camps.

The fact that the one Mind constitutes the brotherhood of man resists and defies every form of separation.

Looking “deep into realism” (Mary Baker Eddy, Science and Health with Key to the Scriptures, p. 129), we see that there is an omnipotent power at work that can arrest and reverse the fragmenting trends that have divided the nation. The divine Spirit imparts an irresistible impulse toward unity based on the simple fact—central to the theology of Christian Science—that there is only one Mind, God. It is a powerful, centripetal spiritual influence that, when understood and acknowledged, can restore civility to the national conversation and enable men and women of good faith to respond to the divine entreaty recorded in Isaiah: “Come now, and let us reason together, saith the Lord” (1:18).

Christian Science posits the premise that unity is not about many human minds coming together but about the one divine Mind expressing itself through individual human consciousness. The fact that there is only one Mind virtually “constitutes”—is not just a precondition to but actually constitutes­—the brotherhood of man, as Mrs. Eddy writes (see Science and Health, p. 340). To constitute is to establish as a fact, and the fact that the one Mind constitutes the brotherhood of man resists and defies every form of separation. And to the extent that this fact is understood, it embraces human affairs in a bond of unity.

“Christian Science reveals Truth and Love as the motive-powers of man,” Mrs. Eddy explains (Science and Health, p. 490). Thus, God’s children cannot be narrow-minded or closed-minded but are governed by the gentle graces of Spirit, reflecting the openness, kindness, and magnanimity of the divine Mind itself.  So, in our demonstration of this spiritual reality, we are bidden by God to rise above personal self-interest, ambition, and proscriptive views.

God’s man cannot be made an instrument of error’s evil design to divide and confuse, and the human mind must yield to Love’s impulse and listen thoughtfully and generously to those with differing views. We must know and demonstrate that as God’s man, we are possessed by divine intelligence, and we cannot be deceived by the prevarications sometimes employed by politicians to advance their electoral prospects. We must know, as Mrs. Eddy says: “Honesty is spiritual power. Dishonesty is human weakness, which forfeits divine help” (Science and Health, p. 453).

We are bidden by God to rise above personal self-interest, ambition, and proscriptive views.

In addition, we can know that it is God, not personality or human will, expressed sometimes as intolerance and inflamed passions, who governs man. “Remember, it is personality, and the sense of personality in God or in man, that limits man” Mrs. Eddy writes (Miscellaneous Writings 1883–1896, p. 282).

Trust and mutual respect are the products of seeing man, as Christ Jesus did—as God sees man: as the very expression of God’s own being; as the very manifestation of all the attributes of Love and Soul. On this basis suspicion, distrust, and disunity can be purged from human consciousness, and in the place of paralysis can come God’s irresistible, self-enforcing law of harmony.

Mrs. Eddy herself took the keenest interest in the affairs of her country and the world. In fact, the ultimate purpose of her Church was not individual redemption alone but the “healing of the nations” (Revelation 22:2). She subscribed to and read several magazines dealing with current affairs. It is recorded that she read and underlined various points in speeches given by President Theodore Roosevelt. Once, when conversing with a visiting journalist just returned from China, she spoke in such detail of the politics of the Chinese court that the man was quite astonished (see Erwin Canham, Commitment to Freedom, pp. 11–13).

Moreover, she believed that the prayers of Christian Scientists could ameliorate what she called the “imminent dangers confronting the coming century” (Miscellany, p. 266), including imperialism and the abridgment of human rights (see Miscellany, p. 129 and p. 266). The power of such prayer to bridge deep divisions was demonstrated dramatically when she and her students prayed earnestly to help bring an end to the 1904–1905 Russo-Japanese War.

It was no accident that Mrs. Eddy would be led, in 1908, to found an international daily newspaper—The Christian Science Monitor—that was designed to quietly inform, not inflame, public thought; to bless and not to injure.

One of her secretaries, Irving Tomlinson, notes that he did “not recall a single instance in which I found Mrs. Eddy to be neutral. On questions of public policy, she beheld the moral issue as paramount, the welfare of all mankind as the primary issue, and on such matters she was never neutral” (Twelve Years with Mary Baker Eddy, Amplified Edition, p. 249).

But this spiritually insightful and deeply informed woman also issued this significant caution: “Avoid being identified pro or con in politics. If you do otherwise it will hinder our cause, remember this. Keep out of the reach of such subjects. Give all your attention to the moral and spiritual status of the race. God alone is capable of government; you are not, I am not, but God has governed through His anointed and appointed one in the way of divine Science;—not politics nor the making or breaking of national laws or institutions. He, God, alone is capable of this” (L13516, May 1, 1907, © The Mary Baker Eddy Collection). 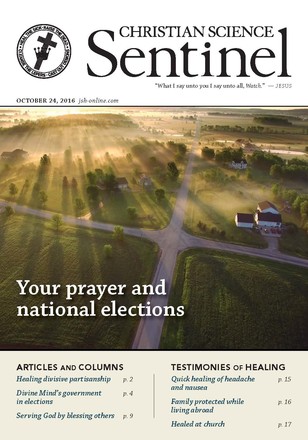 Serving God by blessing others

Quick healing of headache and nausea