What’s your perception of being?

Mary Baker Eddy referred to “the scientific statement of being” as “my first plank in the platform of Christian Science” (Miscellaneous Writings 1883–1896, p. 21), and it reads: “There is no life, truth, intelligence, nor substance in matter. All is infinite Mind and its infinite manifestation, for God is All-in-all. Spirit is immortal Truth; matter is mortal error. Spirit is the real and eternal; matter is the unreal and temporal. Spirit is God, and man is His image and likeness. Therefore man is not material; he is spiritual.”

This statement, which denounces the belief that matter is the substance of life, differentiates Christian Science from all other belief systems, in science or religion, and to most of the world it is a revolutionary statement. With matter as the seeming source of joy and pleasure, the seeming symbol of prestige and wealth, the seeming reward for which we work, would one want to take an opposing view?

Interestingly, the pursuit of a spiritual understanding in the opposite direction and its relation to man’s well-being in fact empowers people to overcome the pains and seemingly endless presentation of problems that come with the human experience. Mrs. Eddy writes: “The belief that a material body is man is a false conception of man. The time has come for a finite conception of the infinite and of a material body as the seat of Mind to give place to a diviner sense of intelligence and its manifestations,—to the better understanding that Science gives of the Supreme Being, or divine Principle, and idea” (Science and Health, p. 285).

The commonly held perception of our being is that we are material, coming from and made up of material elements that define the health and condition of our being. Christian Science takes exactly the opposite view of the origin and state of man, as the last sentence of “the scientific statement of being” makes clear: “Therefore man is not material; he is spiritual.”

In Christian Science we see man fully formed, complete, as the idea of God, divine Mind. The divine source of being is the ever-present, divine intelligence called Mind, or God, who knows Himself and His idea, man, as His spiritual image and likeness. Each one of us is an idea of God, the individual expression of this infinite, wholly consistent, complete Mind.

Matter in its very nature is finite, bounded, and limited. Understanding that one’s existence is entirely spiritual, never restricted by the confines of matter, frees one’s thought from the superimposed boundaries of matter. It also frees from a self-imposed bondage that is brought on by the suggestion that matter has intelligence.

From this standpoint we are able to see man (the true identity of everyone) as exempt from any physical condition, because his being, and all that is lasting and real, is under the control of the divine source of being. From here we can find freedom from the specific limits mortal belief imposes on our understanding of God, man, and life.

To illustrate, a few years ago a large lump developed in my leg and grew over several months; I became convinced that it was very serious. I finally called a Christian Science practitioner, and during our conversation he encouraged me to gain a deeper understanding of “the scientific statement of being.”

Intrigued, I took up the mental work, using the Bible, the writings of Mary Baker Eddy, and a dictionary to help me. I worked patiently and methodically, aiming to simply understand that statement and why it was the basis of one’s being. I reasoned through each sentence, looking for the logic behind it.

As I did this, I saw that Truth, God, explained in Christian Science as the source of all that is real and eternal—“the all-knowing, all-seeing, all-acting, all-wise, … all substance; intelligence” (Science and Health, p. 587)—is the direct counter fact to the claim that matter has the ability, power, and intelligence to create its own conditions, such as a growth. If God has all creative power, then matter has no creative power, no intelligence or real existence, and it cannot create a lump. Matter has no eternal quality of being, no power to originate anything.

In Christian Science we see man fully formed, complete, as the idea of God, divine Mind.

Delving further into the Spirit-based reasoning that Christian Science presents, I turned to Mrs. Eddy’s book Unity of Good, specifically the chapter titled, “There is no Matter” (see pp. 31–36). This chapter provides a helpful explanation that completely debunks the claim that matter is real. It points out that the belief of matter is always a lie, which needs a supposed mortal mind and its tools, the physical senses, to talk and testify: “… matter testifies of itself, ‘I am matter;’ but unless matter is mind, it cannot talk or testify; and if it is mind, it is certainly not the Mind of Christ, not the Mind that is identical with Truth” (p. 33).

A few days later, having gained a clear understanding that matter did not define being and had no ability to act, create, or define me, I shut my books with the clear thought, “Move on with your life.” I began to live more fully and freely. Within a few weeks the lump was gone, and it has not returned, nor has anything similar to it developed in any other part of my body.

Mrs. Eddy’s biblically based metaphysical logic was derived from a deep study of the Bible and the revelation of the spiritual power with which God has endowed man. This Science is intended to free people from binding material conditions. Through Mrs. Eddy’s healing work and commitment to following in Christ Jesus’ footsteps, she demonstrated that Christian Science liberates mankind from being governed by false belief—from identifying oneself as material and therefore subject to material laws, limits, and theories.

The false belief that health, harmony, and happiness are resident in matter and subject to material conditions, laws, limits, and theories puts healing seemingly out of one’s control. But understanding that one’s existence is under the direct influence and control of divine Mind, God, exempts man from materially based limits, such as disease.

In my own healing, my mental concept of what constituted my being had been stirred to a conceptual change—from seeing myself as an entity subject to termination and disease, to seeing myself as spiritual, an entity in which matter had no place and no intelligence to create conditions. The truth of our being is that we are each a complete and divinely formed spiritual idea, man, in which every function is under the control of divine Mind.

To me, this beautiful healing demonstrated the power that comes from knowing and utilizing the spiritual dominion that is given to man in the first chapter of the Bible. Isn’t the knowledge of man’s dominion what enabled Christ Jesus to heal in every case? Yes, and daily we each have the opportunity to use the divinely metaphysical logic presented in the Science of Christ to understand our true being, exercise our God-given dominion, and overcome any discordant condition we’re facing. 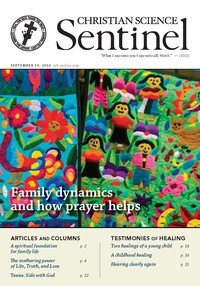