In the winter of 1980 my younger brother committed suicide

In the winter of 1980 my younger brother committed suicide. This was a total shock to my parents and me. The four of us had always been a close family. While we had all known that my brother was going through a very hard time and we had been deeply concerned about the depth of his despair, we had mistakenly assumed that a person as surrounded by the love of family and friends as he was couldn't possibly commit such an act.

Within an hour of my receiving this news, I called a Christian Science practitioner. I will never forget his immediate and powerful words on the telephone. He kindly but firmly helped me recognize that my brother was at one with his Father-Mother God, just as he had always been.

This thought gave me considerable strength over the next few hours as I flew home and did my best to support my parents. However, late that night, when we finally went to bed, I remember lying awake and thinking it was useless for the three of us to go on living, as there could never be any real happiness or peace for us again.

The next few days I stayed in touch with the practitioner, whose spiritual calm and strength were invaluable to me. I felt the need of his prayers at that point, but the day after the funeral I called him and said I felt ready to begin praying on my own. He encouraged me to do so and reminded me, as he had mentioned several times earlier, that I could expect a complete healing, with no emotional scar remaining.

After I had hung up the phone, I began pondering the facts of my brother's true selfhood, his true spiritual being. As I thought more earnestly about this, suddenly I felt a wonderful peace wash over me. I had glimpsed the truth that every one of us is a loved spiritual idea, and I was released from fear for my brother's welfare. After that insight I never again doubted that his life was eternal and that he was being tenderly loved and cared for by God.

The ongoing challenge, however, was to prove that that same love and care were fully evident in the lives of my parents and me. I needed that same day to return to the city where I had been living and go back to work, but it was hard to leave my parents when they seemed so much in need of love and comfort.

As we learn, however, the blessings of divine Love often come in ways we couldn't have imagined. A few months earlier a younger couple had moved into the house next door to my parents. Although relations between the two houses were cordial, given the differences in age and life style, not much real friendship had developed. Now this couple felt impelled to reach out to my parents, and a wonderful friendship developed. The couple provided a vitality and warmth needed in my parents' lives at that moment. In the years since that time, this friendship has continued to grow and to bless both families.

My own experience was wonderfully guided as well. In the months that followed my brother's passing I was able to continue normally at my job, but I lived a quiet life. I often felt confused and in need of answers to certain questions. As a result, my study of Christian Science was more deep and constant. This was a time of much spiritual growth.

One Wednesday evening I was seated in The Mother Church, waiting for the testimony meeting to begin. Suddenly I was almost overcome with a feeling of grief; I thought I would have to leave the church. However, I desperately wanted to hear the readings and testimonies, which I knew would offer healing, so instead of leaving I reached for a Christian Science Hymnal. It opened to Hymn 135 and I read the first lines:

I know no life divided,
O Lord of life, from Thee;
In Thee is life provided
For all mankind and me.

As I read I thought, "Yes, I know. I understand that my brother's life is eternal, and I'm so grateful for that understanding. But what about us? We have to live without him and have painful memories to deal with." Instantly my eyes fell back to the Hymnal and I read the first lines of the second verse:

I fear no tribulation,
Since, whatsoe'er it be,
It makes no separation
Between my Lord and me.

I saw that here was my answer. Even as man's life is eternal, so are the qualities of goodness and joy. Even as those who pass on can never be separated from God's love, neither can those who continue in this experience. The sense of grief was lifted, and by the time I left the church I felt refreshed and free.

Full healing came gradually but very solidly. I have often remembered the practitioner's assurance that there needn't be an emotional scar remaining because there isn't any known to God. My brother and I were always close, and I continue to feel that love and closeness. I feel certain that he is well cared for by God; it is not painful for me to think of him. On the contrary, what I remember best about our times together is his wonderful sense of humor, and I can rarely think of him without laughing or smiling.

In the first months after this experience I developed a more radical reliance on God. This reliance has blessed my life in countless ways, opening my thought and experience to interests and activities that have brought me a higher and fuller sense of happiness. A number of false character traits have also dropped away. A tendency toward compulsive eating has been healed almost effortlessly, and I have gained a more expansive sense of love that has resulted in a greater diversity of friendships.

In our family we have seen great progress and an incredible flow of blessings. The following has become one of my favorite Bible verses, since it describes my experience so well (Isa. 35:1): "The wilderness and the solitary place shall be glad for them; and the desert shall rejoice, and blossom as the rose."

Send a comment to the editors
NEXT IN THIS ISSUE
Testimony of Healing
A chest X-ray taken for admission to college did not give me a... 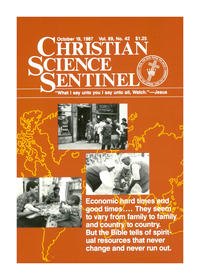