Partially unnoticed midst elections in the US and crises abroad has been the evolution of society into what is being called a “post-truth” era. This arresting phrase, coined more than a decade ago and noted with growing concern since then, describes the increasing disregard for truth in politics and the media by those who issue—or blandly accept—statements that have no basis in fact.

Experts note a variety of explanations for this unsettling trend: declining public trust in public and private institutions; proliferating sources of information, thanks mainly to the internet, which generate a flood of often unverifiable “facts” (although a small industry of fact-checkers has risen in response); alienation and disillusionment caused by economic distress; and an apparently growing disinclination on the part of many to accept facts that challenge long-held perceptions. It is a disposition sometimes exploited by politicians of opposing parties in many countries, whose appeals create or play upon inflamed emotions. Commentators warn of allowing truth to become whatever it is expedient to believe.

And something else as well: the changing nature of the media, in which, as the British journal The Economist notes, the fragmentation of news sources—blogs, social media, the rise of the partisan press, the proliferation of cable channels—“has created an atomised world in which lies, rumour and gossip spread with alarming speed” (“Art of the Lie,” September 10, 2016).

In this changed media environment, The Christian Science Monitor stands, as it has since it was founded by Mary Baker Eddy in 1908, as a powerful expression of clarity and truth in journalism.

Mrs. Eddy, the Discoverer and Founder of Christian Science, saw that journalism could be essential to fulfilling the redemptive mission of her Church. But in a world filled both with problems and promise, it had to be journalism of the highest order, reflecting the ethos and ethical standards of Christian Science itself and linking its readers to a world described in its pages with as complete accuracy and fairness as possible.

Alfred Farlow, who was manager of the Committees on Publication for The Mother Church the year the Monitor began publication, captured the Monitor’s founding vision this way: as a newspaper “which has no other purpose than to advocate strict adherence to right” (Letter to Committees on Publication, October 16, 1908). And “right,” for the Monitor, has always required striving for the dissemination of news and opinion free from bias or slant. This has remained the Monitor’s vision to the present day. An ideal, if not always attained, which nevertheless remains the ideal.

Given its mission, the Monitor could strive for no other standard than complete integrity.

Like most news organizations, the Monitor’s editorial board stakes out positions on the main issues of the day. Letters to the Editor indicate that not every reader agrees with every editorial position the Monitor takes. But the yardstick that guides its choices stands out in sharper-than-ever relief in an age of often partisan internet journalism. It is not, for example, to wag fingers at government officials but to bring insights to public attention that can be used to promote healing. It explores readers’ concerns regarding social, economic, or political discords, not to magnify strife but to reveal underlying causes that help Christian Scientists focus their prayers. In this sense, the Monitor is fulfilling Mrs. Eddy’s mandate “to injure no man, but to bless all mankind” (The First Church of Christ, Scientist, and Miscellany, p. 353) and her corollary mandate for Christian Scientists to expose error “not in order to injure, but in order to bless the corporeal man; …” (Science and Health with Key to the Scriptures, p. 453).

The Monitor is in business to help clarify, as an early chief editorial writer, John J. Flinn, once put it, “… that no matter what appearances may be, good is the only reality.” The Monitor, he said, “must put into practice the Golden Rule and stand for the universal brotherhood of man and the Fatherhood of God” (Untitled talk, circa 1910, Mary Baker Eddy Library Collections).

Though it performs a different office, the Monitor has always shared the same essential mission with the other Christian Science periodicals, The Christian Science Journal, the Christian Science Sentinel, and The Herald of Christian Science: human salvation. It does so by providing the facts and insights readers need in order to comprehend and embrace the world’s need, to the end of redeeming mankind from the mortal, material premises that hold it in bondage. The Monitor points to those hopeful and compassionate elements of the human condition that can be clearly seen only through the lens of Christian Science. As Mrs. Eddy writes, “Science only can explain the incredible good and evil elements now coming to the surface” (Science and Health, p. 83).

Given this mission, the Monitor could strive for no other standard than complete integrity.

The Monitor has, in effect, extended an invitation to those who consume news to inform, not merely to reinforce, their views. It evaluates policy independent of politics. It examines all sides of public issues as presented by responsible officials and commentators. To this end, it eschews partisanship, personal attacks, and the attribution of false motives, always judging “righteous judgment,” as indicated by the master Christian, Christ Jesus (John 7:24).

The Monitor’s mission, said John Flinn (in the same talk quoted above), “is to build, not to tear down.” He added: “Every inch of encroachment on the part of the morbid, the morally unwholesome and poisonous, has been fought persistently and even desperately” by the Monitor.

As legendary Monitor correspondent and columnist Roscoe Drummond noted in an address he gave in 1934, the paper’s goal is “… to aid its readers in gaining a knowledge, an insight, into human conditions so that its readers may exert a constructive and needed influence in checking crime, in ejecting social error, and in maintaining law and order” (“Chicago Speech, J. R. D.,” 1934). Thus, readers as well as writers and editors are needed to help the Monitor fulfill its healing mission.

In the end, properly utilized, The Christian Science Monitor can turn its readers from being discouraged or depressed by the news. It does so by providing news within a framework that enables its Christian Scientist readers, and as many others as possible, to bring to bear on the day’s events the spiritual insights that challenge the inevitability of error, helping to lift readers up to be “eyewitnesses of his majesty” (II Peter 1:16), eyewitnesses of God’s supremacy and authority in human affairs.

The Christian Science Monitor stands as a challenge to the trend that we live in an increasingly foggy, “post-truth” world. For this reason it is needed now more than ever before. 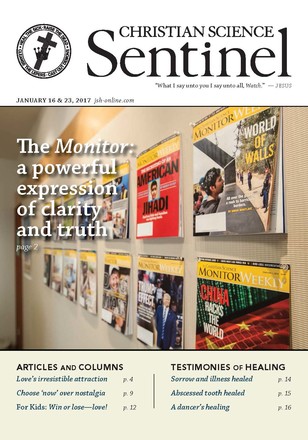 The Monitor: a powerful expression of clarity and truth

Adhere to the whole truth

Announcement about The Christian Science Monitor

By The Christian Science Board of Directors | January 2017

By The Monitor’s Editorial Board | January 2017

Some thoughts on aging