Today more than ever, mankind needs the individual who expresses moral courage. We must be able to choose right instead of wrong, truth instead of deceitfulness, good instead of evil, what’s virtuous instead of what’s vicious, and what truly blesses our neighbor because it’s in accord with God, the divine Principle, Love. We should be more interested in doing what is right instead of what is easiest or to our personal advantage. Making our mission to glorify God, recognize the spiritual dignity and uprightness of our fellow man, and live to bless humanity will bring harmony and success to whatever we do.

Having moral courage means doing the right thing. Our moral courage is our ability to be honest and ethical, to know that we can’t be harmed for trusting in divine Principle. It is based on the spiritual understanding that God, divine good, is all-powerful and ever present to govern and bless everyone; it speaks the truth and puts down the temptations of evil or selfish motives. In the Christian Science textbook, Science and Health with Key to the Scriptures, Mary Baker Eddy states: “Moral courage is requisite to meet the wrong and to proclaim the right. But how shall we reform the man who has more animal than moral courage, and who has not the true idea of good? Through human consciousness, convince the mortal of his mistake in seeking material means for gaining happiness” (p. 327).

As God’s spiritual, innocent child, I did not have to be the victim of any unethical or illegal action.

Sometimes we might think it’s too difficult for us to do the right thing. Every day we read about ethical dilemmas in government and business. In many cases, everyone involved wants to do right, but sometimes the moral courage to do right is missing. We could be tempted to believe that we don’t have a choice in how we behave, or that no one else would ever know whether we acted honestly anyway. When we are faced with such dilemmas, prayer that acknowledges God’s government and care for us gives us courage to be faithful to God’s law, to abide safely under the government of divine Principle.

If we are faithful, and if we pray to express God, divine Truth, with integrity, righteousness, and love, then we will find that the actions we take to do the right thing are governed by God, divine Mind. True moral courage blesses others. It is not about looking to catch someone in a lie or a deception. Rather, our prayer can lead us to solutions that bring about justice in a way that is right and good for everyone involved.

I once had to face such an ethical dilemma at work. My director called me up and told me I was being moved into a new position, where I would be operating an entire division of the company. At first glance, this seemed an outstanding opportunity for advancement. However, soon after this meeting I was told about unethical, possibly illegal, and even mentally abusive behaviors being practiced within this division. The last two division managers had been removed, and the latest division manager had been in the position for only nine months.

I had not been asked, I had been directed, to take this position. My first reaction was that I would try to just get through one or two years of grief. However, I found myself writing down several things that would need to be changed in the division, including the unethical practices, before I would accept the position. My director reviewed this list and told me on a Friday evening that he could not make any changes for the time being, but he still directed me to move into the position on Monday morning.

I felt as though I had no choice. My second-level manager told me I could be fired for refusing to take the position. I had worked for this organization for 20 years and would soon be eligible for retirement. At the time, my daughter was in high school and preparing for college, and I had a young son who would soon be doing the same. I could not afford to be fired for insubordination after all these years.

I went home extremely discouraged. I looked at my children and my wife, and I thought: “Should I just make the best of this? I have a responsibility to my family.” But as I thought and prayed, I realized I needed to be more Christlike. I turned to the Bible. What better source is there to help us understand moral courage?

I started by reading the story of Moses. He was overwhelmed with the task of leading the Exodus of the children of Israel out of Egypt. But with courage he followed God’s command and trusted God to lead the way. Moses was obedient to God’s direction, even though this was far from easy, and at last he was presented with the Ten Commandments, which would teach the standards of moral behavior for the entire world (see Exodus, chaps. 3—20).

The Bible includes many examples of individuals who expressed moral courage, and Christ Jesus is the greatest of them. He met and overcame, through his love and obedience to God, the sins, sicknesses, and hatred of the world. Knowing man’s inseparability from God—because man is the spiritual expression of God—he even yielded to going through the crucifixion, saying, “Not my will, but thine, be done” (Luke 22:42). In yielding to God, Spirit, he proved for all time the fact of eternal life. His spiritual understanding and trust in God did not harm him, but lifted him up out of all materiality.

As I read the Bible stories, I thought of a statement in Science and Health: “Honesty is spiritual power. Dishonesty is human weakness, which forfeits divine help” (p. 453). Why would I ever want to forfeit divine help?

I realized that God is All and God’s action is only good, always blessing everyone, and that His intelligence shows us the way out of any injustice or wrong action. As God’s spiritual, innocent child, I could express and receive only good, and this divine goodness could be demonstrated in my life right now, meaning I did not have to be the victim of any unethical or illegal action.

I prayed to ensure that going forward my own actions would not include any evidence of self-righteousness, self-justification, or ego, but that I would express divine Principle, Love, in doing what was right and in loving others.

If I truly believed that divine Love governs man, then never for a moment would I sacrifice my spiritual conviction.

I prayed with this statement Mrs. Eddy makes in the Manual of The Mother Church: “In Science, divine Love alone governs man; and a Christian Scientist reflects the sweet amenities of Love, in rebuking sin, in true brotherliness, charitableness, and forgiveness” (p. 40). Divine Love, not unjust circumstances, governed me, as well as the people in the division, and I knew that this Love could bring them freedom from dishonesty and unfair treatment. My job was to express and glorify God, divine Love, and be law-abiding. I did not have to allow fear of a job loss or lack for my family to prevent me from proclaiming what was right and humbly doing God’s will. If I truly believed that divine Love governs man, then never for a moment would I sacrifice my spiritual conviction.

On Monday morning, I went to work and sat at my old desk doing my old job, just like any other day. My director saw me but at first said nothing. As I worked, I also prayed, knowing I could never be separate from God, divine Love, and that I could be obedient to divine Love.

That afternoon my director walked by again and saw that I was not moving into the new office. At the end of the day he said to me, “All right, we will make all the changes you laid out in your letter, but you had better succeed, and you have six months to prove that you can succeed.” You might think I would have been afraid, given such a timeline, but, in fact, what I felt was pure joy. I knew God was in control and would continue to guide me, because divine Love alone governs man and cannot fail.

I moved into the new position the next day, and I held it for the next nine years. The organization became successful, and when I retired, it created an annual award in my name in recognition of work done in the best interest of employees.

Science and Health states: “Moral courage is ‘the lion of the tribe of Juda,’ the king of the mental realm. Free and fearless it roams in the forest. Undisturbed it lies in the open field, or rests in ‘green pastures, … beside the still waters.’ In the figurative transmission from the divine thought to the human, diligence, promptness, and perseverance are likened to ‘the cattle upon a thousand hills.’ They carry the baggage of stern resolve, and keep pace with highest purpose” (p. 514).

We all can stand firm against any seemingly insurmountable problem, knowing, with spiritual resolve, that we are inseparable from God, divine Love, because we are the spiritual expression of God and are dearly loved by God. When we see that we are totally governed by God, we will have the courage to demonstrate God’s eternal power and presence in whatever we may face. God has given us dominion over all.

Shall not the Judge of all the earth do right? 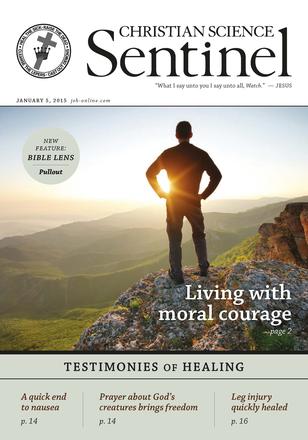 Safe after being held up at gunpoint

One in fellowship of Mind

My healing in Sunday School

A quick end to nausea

‘And this is Christian Science’

‘No change my heart shall fear’*