How to turn back hate and abuse with a love that heals.

When I first saw Challangro, he was not someone I wanted to know. I had moved to Chicago, to a part of the city that was considered one of the most culturally diverse neighborhoods in the United States. It was filled with old brick buildings, large houses built around the turn of the century, and here and there, a housing project. Several gangs, including the Latin Kings, had their hangouts in the area.

Friends and family would at times express concern about my safety, and while there were definitely times that I felt afraid, I loved the diversity and grit of the neighborhood. It had an edge that was dynamic and that made me pray fervently for peace and healing. My experiences there compelled a growing relationship with God—and Challangro, a man who often hung out with the Latin Kings, became an important part of this.

I didn't know his street name at the beginning. It was his face I couldn't forget. Whenever I crossed paths with him, he would make sexually derogatory comments. He was not subtle about it, and he did it on a regular basis. I was disgusted, infuriated. I felt verbally raped. I hated him. In fact I made a conscious effort to despise him, thinking that perhaps my anger might in some way humiliate and silence him. It only encouraged him.

I began to realize that my hatred was doing something rather ugly to me. It was hardening my heart, encouraging despair, bitterness, cynicism. Also, it was not making me feel less fearful. In a collection of the writings of Mary Baker Eddy, there is an article called "Love Your Enemies." In that piece she wrote: "Hate no one; for hatred is a plague-spot that spreads its virus and kills at last. If indulged, it masters us; brings suffering upon suffering to its possessor, throughout time and beyond the grave" (Miscellaneous Writings, p. 12). I knew what she meant.

I began to ponder the teachings of Jesus—the command to love our enemies, to bless them that curse us, to do good to those who use us (see Matt. 5:43–48). But why should I love someone who had been so unkind? How could I love this man? My prayer became: "Show me something to love; show me."

An idea became clear. It came like this: "Joni, look at him. He's hanging around the neighborhood every day, drinking his beer, taunting people. Do you think he really feels good about himself? Don't you think he's looking for a purpose?" I had not even considered this.

This time I looked past the surliness, and what I saw nearly stopped me in my tracks.

I had to pause and radically rethink things. I had allowed myself to believe that his actions necessarily compelled my responses—that I was a victim—and that my well-being was dependent on his actions. No, he didn't have the capacity to determine my responses—nor did he have the ability to influence my thinking, my actions, my view of myself or of him. Perhaps Jesus' teaching on the importance of loving our enemies was pointing out that regardless of how ugly experiences have been, there's something precious to be found—something holy. I began to feel that the demand to love is rooted in an innate, irresistible, and indestructible goodness.

At the beginning of "Love Your Enemies," Mrs. Eddy writes, "Who is thine enemy that thou shouldst love him? Is it a creature or a thing outside thine own creation?

"Can you see an enemy, except you first formulate this enemy and then look upon the object of your own conception? What is it that harms you? Can height, or depth, or any other creature separate you from the Love that is omnipresent good,—that blesses infinitely one and all?

"Simply count your enemy to be that which defiles, defaces, and dethrones the Christ-image that you should reflect" (p. 8).

My ponderings changed my whole view of the situation. I had been focusing on Challangro as the problem, the abuser, yet I had to admit that my own thoughts were filled with a lot of garbage. Where was my Christliness—that pure essence of all that is good and holy—and where was my view of his?

The turning point came one day when I was about to pass him. I had always avoided eye contact, but today the quiet message was: "Look at him; look him in the eyes." I didn't want to, but I did. What I saw did not impress me. I continued on my way, and about a block down I passed another man who looked at me in much the same way. Again the thought came, but it spoke more firmly: "Look at him! See him. Look inside him."

At that moment I finally understood what Jesus meant. The need here was not for condemnation; it was for love. And it was this love, rooted in the infinite Divine, that would empower, wash, comfort, restore, heal.

I don't know when the tauntings stopped, but they did. And one day Challangro walked right up to me. He asked me what I had in my bag. I asked him if he really wanted to know. He said yes. So I pulled out magazines on healing, much like this one. There was even one in Spanish. He looked at me, and then looked up to the sky, pointed, and said, "You know Him." I said, "Yes, and you obviously do, too." We walked together for several blocks talking about God's love for all of us.

We often chatted after that day. He let me know his real name. He loved reading the Spanish Edition of The Herald of Christian Science, and the Spanish translation of Mary Baker Eddy's book Science and Health with Key to the Scriptures that I gave him. Then he told me that a friend had taken his copy of this book and wouldn't give it back. He asked for another. I told him where he could get one. Things did not change overnight for him, but he has made progress.

I moved from Chicago a few years ago, and shortly after I left, Challangro ran into a friend of mine. He asked where I'd gone and told her that I was supposed to give him a book! My friend shared this with me, and so I asked her to deliver a letter and another copy of Science and Health to him. He wrote back to thank me and said that the book was helping him.

Mrs. Eddy writes, "'Love thine enemies' is identical with 'Thou hast no enemies.' Wherein is this conclusion relative to those who have hated thee without a cause? Simply, in that those unfortunate individuals are virtually thy best friends. Primarily and ultimately, they are doing thee good far beyond the present sense which thou canst entertain of good" (Mis., p. 9).

At one time I did think that Challangro was an enemy. Now I know that the enemy wasn't him—that the enemy is anything that would try to get any of us to believe that we're less than precious, worthy, necessary, Godlike.

All revolutions begin within. Our warfare, then, is not really with people: it's with fear, hatred, jealousy, greed. We need to defend our sense of who we truly are: God's children, one and all. We need to be mindful of our thoughts of others. Motives and actions based in this pure love compel healing, bring people together, promote peace in our hearts and in neighborhoods everywhere.

Send a comment to the editors
NEXT IN THIS ISSUE
Article
Survivor or conqueror? 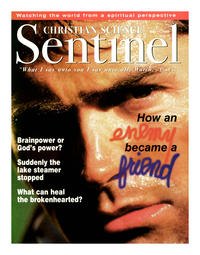