Jesus’ disciples must have been surprised. They had tried to shield him from some small children—but he rebuked them! “Suffer the little children to come unto me, and forbid them not,” he said, “for of such is the kingdom of God” (Mark 10:14).

In the current run-up to the American presidential election, I’ve revisited Jesus’ words. Not so much because of candidates’ behavior or some disquieting predictions by the press, but because of my own reaction to them. Over and over, I’ve detected a resigned response on my part that amounts to cynicism. And cynicism is contrary to a childlike heart.

Twentieth-century journalist Sidney J. Harris defined a cynic as “one who is prematurely disappointed in the future.” Filmmaker Ken Burns went further: “Cynicism is fear, and it’s worse than fear—it’s active disengagement.”

Disappointment, fear, and disengagement don’t fit with an understanding of Christ Jesus’ teachings—or the kingdom of God he referred to when he commended little children to his followers. Jesus often spoke about this heavenly state. Most compellingly, he defined the kingdom as immediate and accessible—as present in every human consciousness. “The kingdom of God is within you,” he told some questioners (Luke 17:21).

Mary Baker Eddy, who discovered the Science of God’s kingdom, wrote of the kingdom “within you” as “within man’s spiritual understanding of all the divine modes, means, forms, expression, and manifestation of goodness and happiness” (The First Church of Christ, Scientist, and Miscellany, p. 267).

This all-encompassing sovereignty is no mere alternative to human government, but the real thing—the unique and absolute rule by the one God. The good news of the kingdom emphatically contradicts mixed or bad news, including the details of gritty political campaigns.

As a spiritual thinker committed to healing, I find myself instinctively rebelling at cynicism. Sometimes this bleak outlook feels like a virtuous absence of outward backlash, though reaction may be churning under the surface. Other times it’s a “whatever” attitude that shrinks from thoughtful action and simulates God-inspired poise. However cynicism presents itself, it is allied with passivity and defeatism—negative views of reality that are totally at odds with the kingdom within.

Kingdom qualities, on the other hand, are childlike. Purity, generosity, trust, and affection are spiritually based attributes. They neutralize mortal traits that sometimes surface during crucial national or international events—traits such as greed, mean-spiritedness, deception, and egotism.

The kingdom in consciousness excludes every opposing thought and action, just as Jesus promised: “The Son of man shall send forth his angels, and they shall gather out of his kingdom all things that offend, and them which do iniquity” (Matthew 13:41).

Christ Jesus’ admonition to welcome little children challenges the way I think about news stories, friends’ strong opinions, and my own biases. It reminds me to welcome every evidence of innocence and spiritual expectancy. It calls on all of us to recognize goodness as innate in each of God’s children, whether it seems outwardly apparent or not.

A candidate acts dishonestly or speaks in less than charitable terms? Pundits predict disaster? Discouragement overwhelms us? A firm stand against fatalism and despair is natural to the thought that has not only welcomed childlike qualities but wholeheartedly adopted them. Matthew records Jesus as saying, “Except ye be converted, and become as little children, ye shall not enter into the kingdom of heaven” (18:3).

At its root, cynicism is a rejection of the Christ, God’s message of good to mankind.

What does this converting action look like? For me, it’s a defense and celebration of spiritual good as the sole reality here and now, for ourselves and everyone. “Hold thought steadfastly to the enduring, the good, and the true,” writes Mrs. Eddy, “and you will bring these into your experience proportionably to their occupancy of your thoughts” (Science and Health with Key to the Scriptures, p. 261). Arrayed against cynical detachment, this divinely proactive stand for God’s all-goodness animates us. It infuses our entire outlook with buoyancy and hope.

At its root, cynicism is a rejection of the Christ, God’s message of good to mankind. Preeminently expressed by the man Jesus, the Christ affirms that God’s omnipotence and omnipresence are demonstrable by each one of us. A cynical attitude denies good and takes false comfort in “knowing” the ways and outcomes of evil. In Jesus’ time, it arrogantly mocked his message and his works.

Just before what seemed the lowest point of his ministry, though, the Master armed his followers with knowledge—crucial information that would reassure them after his crucifixion. He told them, “I will pray the Father, and he shall give you another Comforter, that he may abide with you for ever; even the Spirit of truth” (John 14:16, 17).

The advent of the Comforter, the revealing of the laws of divine Science, brought to light for all time the antidote to evil. As part of the platform of Christian Science, Mrs. Eddy wrote, “Jesus demonstrated Christ; he proved that Christ is the divine idea of God—the Holy Ghost, or Comforter, revealing the divine Principle, Love, and leading into all truth” (Science and Health, p. 332). The Comforter provides the only real comfort—the knowledge of God as supreme good, and of the Christ operating on our behalf.

When hopelessness or resignation tempts us, the presence of the Comforter empowers in us a wholesale rejection of evil as a person, situation, or eventuality. Having no reality in our thought, evil—including the pessimistic pull of cynicism—can’t seize our attention.

As the tender ministrations of the Christ awaken our child-heart, we become fully engaged in spiritual reasoning. We’re more vehement in our declarations of the truth of the kingdom, and more alert to spurn every less-than-Godlike viewpoint. We survey the scene around us with a prayerful expectation of good.

I can’t think of a better way to prepare for a visit to the voting booth. 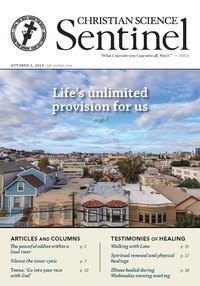